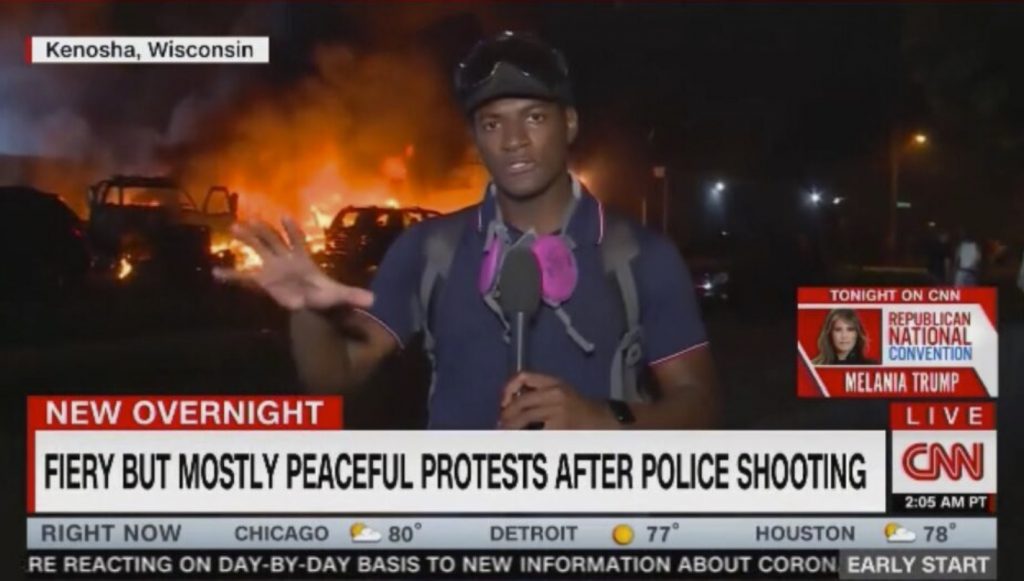 we are being gaslighted. Picture via CNN

The term originates in the systematic psychological manipulation of a victim by her husband in Patrick Hamilton’s 1938 play Gas Light (film adaptations released in 1940 & 44). In the story, the husband attempts to convince his wife and others that she’s insane by manipulating small elements of their environment and insisting she’s remembering things incorrectly or delusional when she points out the changes.

The play’s title alludes to how the abusive husband slowly dims the gas lights in their home but pretends nothing has changed, in an effort to make his wife doubt her own perceptions. The wife repeatedly asks her husband to confirm her perceptions about the dimmed lights, but in defiance of reality, he keeps insisting the lights are the same – and that she is going insane.

These days, we’re living in a perpetual state of gaslighting. ‘Reality’ that the media reports is at complete odds with what we see with our own eyes. When we question the false reality they present, or claim what WE see is actual reality, we are vilified as racist or bigots or just plain crazy.

You’re not racist. You’re not crazy. You’re being gaslighted.

New York State has twice as many deaths from Covid-19 than any other state, and New York has accounted for 1/5 of all Covid-19 deaths, yet we’re told that New York Governor Andrew Cuomo handled the pandemic better than any other governor. But if we support policies of Governors whose states had only a fraction of the cases and deaths as New York, we’re called anti-science and ‘want people to die’.

So, are we crazy? No, we’re being gaslighted.

We see mobs of people looting stores, smashing windows, setting cars on fire and burning down buildings, but we’re told these demonstrations are peaceful protests. And when we call this destruction of our cities riots, we are called racists.

We see the problems destroying many inner-cities: murder, gang violence, drug-dealing, drive-by shootings, armed robbery, etc. But we are told that police are the problem in the inner-cities. We’re told we must defund the police and remove law enforcement from crime-riddled cities to make them safer. If we advocate for more policing in cities overrun by crime, we are accused of being white supremacists and racists.

The USA accepts more immigrants than any other country in the world. The vast majority of the immigrants are ‘people of color’, and these immigrants are enjoying freedom and economic opportunity not available to them in their country of origin. But we are told that the USA is the most racist and oppressive country on the planet, and if we disagree, we are called racist and xenophobic.

The most egregious example of gaslighting is the concept of ‘white fragility’. You spend your life trying to be a good person, treating people fairly and with respect. You disavow racism and bigotry in all its forms. You judge people solely on the content of their character and not by the color of their skin. Yet you’re told you’re a racist, not because of something you thought, said or did, but solely because of the color of your skin. You know instinctively that charging someone with racism because of their skin color is itself racist. You know you are not racist, so you defend yourself and your character. But you’re told your defense of yourself is proof of your racism.

Are you crazy? No, you’re being gaslighted.

Gaslighting has become one of the most pervasive and destructive tactics in Western politics. It’s the exact opposite of what the Western system was meant to be. It deals in lies and psychological coercion, not the truth and intellectual discourse. If you ever ask yourself if you’re crazy, you aren’t.

Crazy people aren’t sane enough to ask themselves if they’re crazy. That’s why politicians never question themselves. So, trust yourself. Believe what’s in your heart. Trust your eyes over what you’re told. Never listen to the people who tell you you’re crazy, because you aren’t.

MAGA vs. The Swamp #5 in the Drain The Swamp Series

Only 9% Of Americans “Have Confidence” In A COVID-19 Vaccine

CAL-EXODUS: Hollywood and LA Elitists Run for the Hills to Escape Looters, Drug Addicts and the Homeless

Signs of Alien Life on Venus

The Pine Gulch Fire burning north of Grand Junction has become the 2nd largest wildfire in Colorado history after it grew to 125,088 acres in size by Wednesday morning

The Rabbit Hole Podcast: The Purge, Pandemonium, and Riots

Would you expect anything else from 2020? RARE and spooky FULL MOON on Halloween will be visible to the entire world and not for just parts of it

US to ease lockdown after virus passes ‘peak’

Dozens of crows fall dead from the sky in Russia

Is another famine looming in China? The Red Dragon struggles to meet basic food demands