Retired brigadier Hemant Mahajan said the Indian Army is ready for winter conflict in eastern Ladakh after months of conflict in the disputed border region. His comments were then circulated by the Indian Army’s Northern Command Public Relations Officer, who sought to downplay the threats from the brigadier. In June, 20 Indian soldiers were killed by Chinese forces in hand to hand combat in the Galwan Valley at Ladakh. Since then, Indian and Chinese officials have attempted to peacefully resolve the conflict, but have also overseen increased military drills and deployments in the region.

Brig. Mahajan claimed compared to the battle-hardened Indian troops, Chinese troops are not equipped for prolonged deployment in field conditions.

The retired officer was responding to Chinese state media outlet the Global Times, who said India is not prepared to fight through the winter due to operational issues.

Brig. Mahajan said: “This can best be attributed to ignorance. Indian Army is fully prepared and more than capable of fighting a full-fledged war even in winters in eastern Ladakh.”

He went on to tout India as a “peace-loving country” and repeated peace talks are ongoing, but added the country’s army is “well prepared for the prolonged stand-off”. 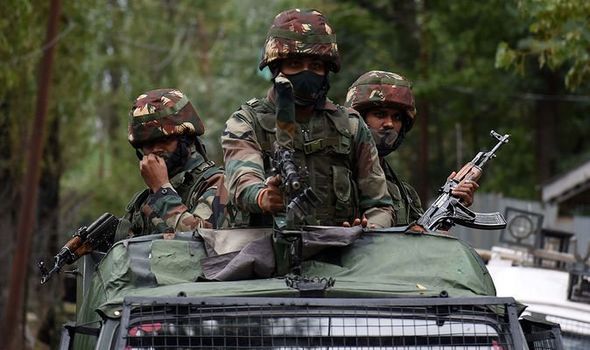 China India news: A retired Indian Army brigadier has warned China its soldiers will outlast them in the winter (Image: Getty)

The retired officer then touted the Indian Army’s experiences in higher altitudes, and referenced Ladakh’s “minus 30 to 40 degree celsius” temperatures in winter.

He added: “The most encouraging part for India is that the Indian soldiers have a huge experience of winter warfare and are psychologically tuned to operate at short notice.”

Brig. Mahajan then said India is well stocked on munitions and well prepared operationally for a winter spent in the field, which should concern China.

He said: “China’s concept has always been to win the wars without fighting, hence if they create conditions for war, they will come across better trained, better prepared, fully rested and psychologically hardened Indian troops.

“These worries have been percolating in the minds of Chinese troops and are visible in Chinese media.”

China India news: Both armies have deployed more than 50,000 troops each to the border region (Image: Getty)

The Indian Army’s Northern Command Public Relations Officer has distanced himself from the retired officer’s comments.

He said Brig. Mahajan’s assessment “doesn’t represent the views of either Northern Command or Indian Army”, and may be treated as “cancelled”.

He then further said Brig. Mahajan “wrongly conveyed” the thoughts of the Northern Command, and did not support his statement.

It comes as diplomacy talks between India and China reached a breakthrough with a five point plan to reduce military tensions agreed by foreign ministers Subrahmanyam Jaishankar and Wang Yi in Moscow on September 10.

But despite the action plan, China has yet to agree to talks with India’s military commanders.

Last week, both armies were on high alert after forces fired bursts of bullets into the air along the Line of Actual Control.

China has responded by deploying 50,000 troops, along with aircraft and artillery on their side of the Ladakh border.

Brig. Mahajan’s warnings are the latest shot between the two countries.

Earlier in September, the Global Times branded New Delhi as “fanatical” ahead of talks between China and India’s military leaders.

It claimed that India has “cancelled much cooperation with China since the Galwan Valley clash in June.”

“It’s nationalism is inflicting damage to itself,” they concluded.

4 Ways to Optimize Your Training with CarnoSyn Beta-Alanine

How does Joe Biden plan to reform US if he is elected president?

Theodore Roosevelt statue to be removed by New York museum