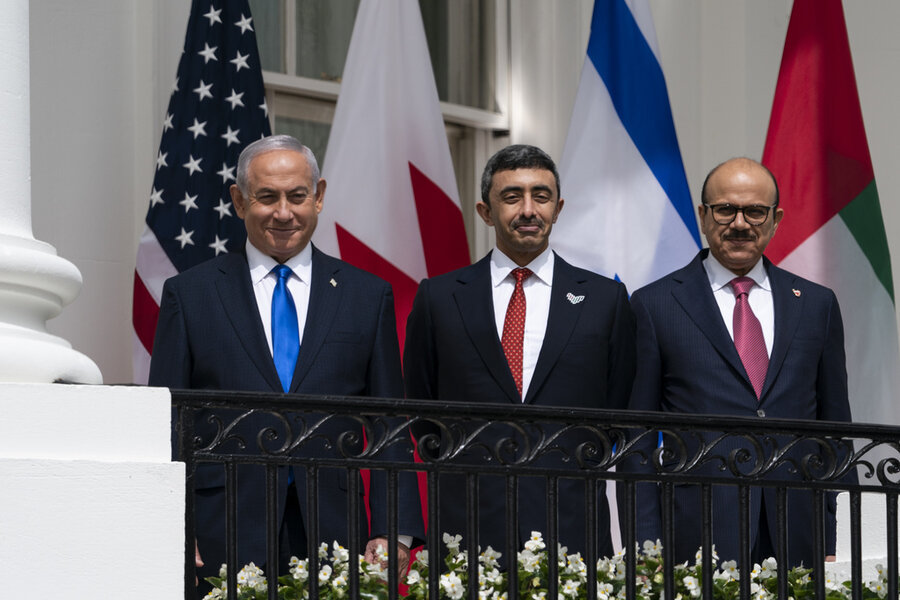 On Tuesday, 193 nations convened virtually at the United Nations with a special note: the celebration of the U.N.’s founding 75 years ago. This broad community of countries – along with the values embedded in its 1945 charter – has “enabled us to avoid the scourge of a Third World War,” noted its secretary-general, António Guterres. In other words, alliances for humanity’s good such as the U.N. can work against bullying nations.

The 75th anniversary arrives just as the world again sees two new partnerships that have formed around shared values to fend off today’s bullies. On Tuesday, the United Arab Emirates and Bahrain signed an accord to normalize relations with Israel in large part to counter Iran’s aggression in the Middle East. And in October, a group called the Quadrilateral Security Dialogue (“the Quad”) – consisting of the United States, India, Australia, and Japan – will meet to discuss China’s military aggression against its neighbors, from the Himalayas to small islands off the Philippines.

In both cases, these regional fronts have made sure to emphasize what they stand for, not only what they stand against. The opening of ties between Israel and the two Gulf Arab states is a “step on the road to genuine and lasting peace, security, and prosperity across the region,” said Bahrain’s foreign minister. The Quad members say they are maintaining the liberal rules-based international order, which China keeps challenging by military means.

If the U.N. has taught the world anything, it is that values-based partnerships are more enduring, unlike those based solely on national interests or a balance of power. In their work to counter China’s aggression, for example, the U.S. and Southeast Asian nations have insisted that Beijing follow international law rather than take islands by force. And the Quad nations are meeting to affirm a “free, open, prosperous and inclusive Indo-Pacific Region based on shared values and principles and respect for international law,” states India’s Ministry of External Affairs.

The global institutions set up by the U.S. and others after World War II have lasted because they were anchored in universal ideals. When the U.N. has faltered against aggression, other alliances of nations – such as NATO – have been needed to ensure peace based on a shared commitment to values. The 75th anniversary is as good a time as any to recall what works for humanity’s good.

Man Living Off-Grid in a Tent on an Island

A beginner’s guide to foraging – Part 3: foraging on the coast

I met boys from Sudan on a beach nearby. There's only one word on their lips – England

Brian Watt: The Mayor of Seattle’s Summer of Blood

News24.com | WHO calls for 'rethink' of elderly care after Covid-19 losses

Dear CNN: 200K Primary Ballots In Nevada Were Mailed To The WRONG Addresses–Is THAT News?

Narnia Criticized For Policy Of Detaining British Children At Border

Why Precious Metals? Why Now?

Father of Parkland shooting victim to speak at RNC

I Need a Motorcycle to Make Friends