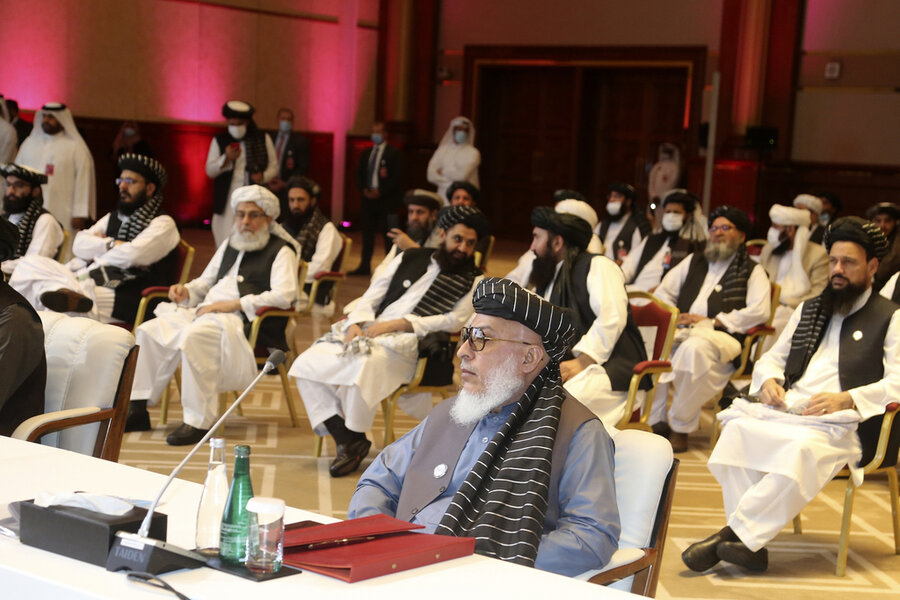 In a historic first for Afghanistan, the Taliban and leaders of the country’s elected government sat together Saturday in hopes of ending a 19-year conflict. Their ongoing negotiation will be closed-door, implying any final deal will be imposed top-down – much like peace deals in history. Yet these days, when more people know the benefits of peace and have the tools to advance it, plenty of players are in “the room where it happens,” in the words of the musical “Hamilton.”

At the table in Qatar is a group most at risk of the Taliban being allowed to revive their harsh Islamist rule (from 1996 to 2001). The government team includes four women. They are there not only to protect women’s rights and achievements – some 40% of girls now attend school – but also to show the Taliban that equality in citizenship has become a global norm. The world has shifted since the Taliban were ousted in the post-9/11 invasion by the United States.

Also in the room during the opening talks were representatives of 13 countries. They gave supporting statements of the elected Afghan government. Few wars are local affairs anymore, as the world has become too intertwined. Demands for peace are more prevalent. In the Afghan talks, this common demand even included rival powers, such as the U.S. and Iran as well as India and Pakistan.

A more vicarious presence in the talks are the people of Afghanistan, especially youth. In polls, they have clearly let the Taliban know that violence is not a path to power. In addition, the Afghan people “will make the final decision” on a peace deal, the government vows. Democracy, like women’s rights, has become too widespread for the Taliban to ignore.

All these players are putting pressure on the Taliban to declare a long-term cease-fire, a precondition by the government before the talks can move to other issues. The fact that both sides released prisoners before the negotiations and the Taliban even agreed to talk are signs of how negotiations work these days – in honor of popular sentiments from the people they represent and in responding to global or regional desires for an end to such wars – especially during a pandemic and recession.

These first direct talks between Afghan and Taliban delegations may be closed-door. But fresh breezes of peace are blowing in.

Netanyahu to Iran: IDF ‘Prepared to Respond to Any Threat’

Coronavirus: Where are global cases rising and falling?

Equality For The Elderly: Grampa Simpson Will Now Be Voiced By Joe Biden

I’ve Put Myself Into a Bad Financial Spot

Really Bizarre Things Are Happening All Over The Globe

Vaccines | Data Behind the Data | The Corona Correction | Refinitiv

Instagram to Allow Everyone to Pin Comments on Posts