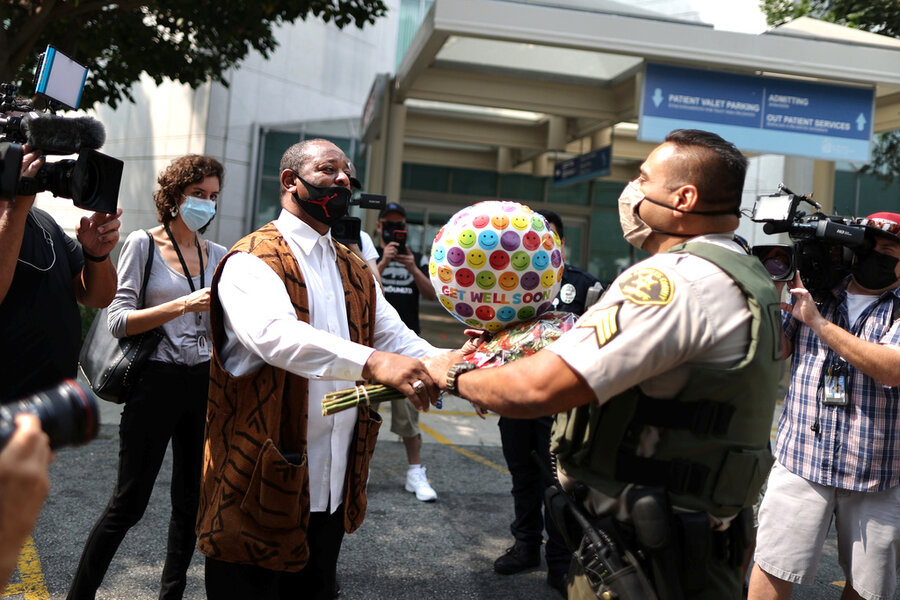 Every American election cycle seems to recycle clichés that don’t always hold up. Republicans are greedy and uncaring. Democrats are socialists and soft on crime. This year is no different. Yet there are signs voters are weary of stereotypes that can harm. In their desire for social justice, Black people are tired of being mischaracterized. Police are tired of being vilified. In the digital age, every group with a grievance more easily sees how labels spread – and can hurt.

Then there are moments when clichés fall away. This was captured in a tweet Sunday by Los Angeles County Sheriff Alex Villanueva. After two of his law enforcement officers – one a young mother – were ambushed by a lone gunman in Compton, the sheriff wrote:

“On behalf of @LASDHQ, I would like to extend our deepest gratitude to both @RealDonaldTrump and @JoeBiden for reaching out today and offering their kind words regarding the horrific ambush which our two brave deputies survived last night.” Both presidential candidates had condemned the act.

It used to be that inflamed rhetoric during a campaign would ebb following an election and give way to a modicum of civility when it came time to govern. That is less true today. Robert Gates, a former CIA director and defense secretary, once warned of the consequences of deepening distrust in politics: “Cynicism about the people and institutions that govern and protect our country can be corrosive. Too often, those who chose public service are dismissed as bureaucrats or worse and, in many cases, politicians run for office running down the very government they hope to lead. In the eyes of many successful private citizens, the burdens of public service have grown too onerous. To them public life seems too mean, too ugly, too risky, too dangerous, and too frustrating.”

This need not be the case. On many issues, voters are not as far apart as they seem. Take public security. Nearly two-thirds are concerned about “law and order,” finds a new Monmouth University poll. That term is problematic as it is historically loaded with racist undertones. Yet after months of social justice protests, some of which resulted in looting or attracted violent confrontations with counterprotesters, a plurality of Republicans and Democrats agree that restoring calm should be a priority.

Importantly, half of Black Americans also agree. While the social justice movement has given voice to the frustration and anguish Black people feel about police violence in their communities, a June Yahoo News/YouGov survey taken after the killing of George Floyd found that 50% of Black respondents still said that “we need more cops on the street.” Only 22% supported zeroing out police department budgets altogether, according to a Gallup poll in July.

Politicians are fond of noting that elections have consequences. That is true as much for how they are waged as for what they determine. Sheriff Villanueva’s tweet carries more than appreciation for bipartisan concern. It conveys an appeal for empathy. That can go a long way toward helping those in public service reach the higher ideals of their calling.

9 Essentials for choosing the perfect bug out location

What to Stock Up On NOW for Fall/Winter COVID Realities

Boy, 12, released under investigation amid footballer racism probe in UK

Obama: Biden and Harris believe no public official ‘should use their office to enrich themselves’

US Calls Out Chinese Regime’s ‘Orwellian Censorship’ on Hong Kong

Desiree Adaway | Exploring the Intersections of Race, Culture and Class

ALL PRE-PLANNED COLLAPSE AND WEALTH TRANSFER!! AMERICA NEVER COMING BACK..