What’s up with all these giant explosions and fires in the last few days?

And don’t forget there are no coincidences in 2020… 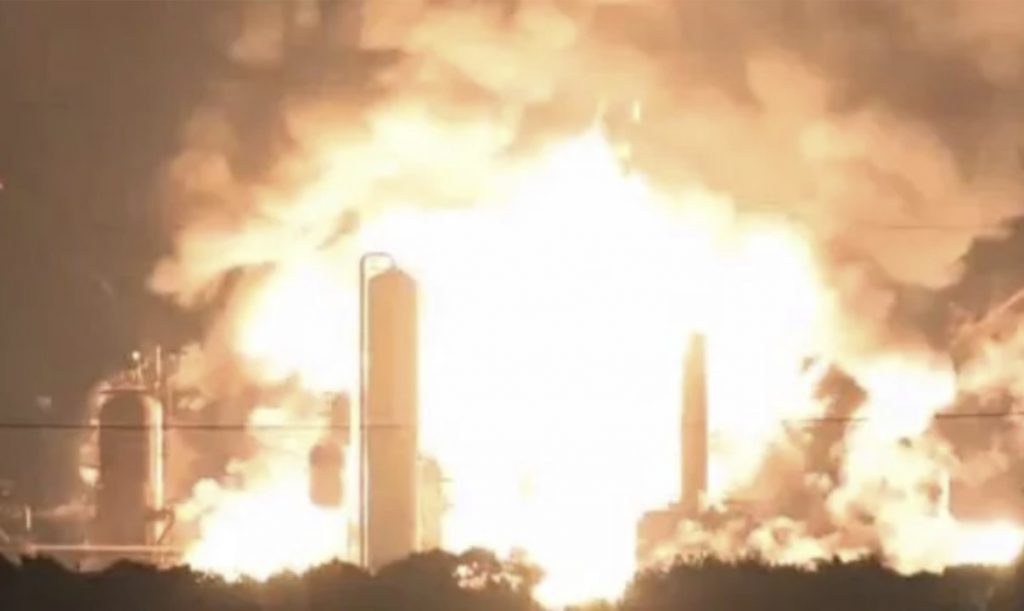 What’s up with all these giant explosions and fires across the world in the last few days? Picture: ABCNews

Everything started on August 3, 2020, in China‘s Hubei province, where a chemical factory flash explosion killed at least six people and injured 4. Cause is under investigation.

This first blast was followed a few hourslater by a giant gas leak explosion in Hyesan, Yanggang Province, North Korea, killing 9 and injuring at least 30 residents. Cause is under investigation.

The day after, the port area of Beirut, Lebanon, was devastated by mammoth explosion killing more than 140 people and injuring thousands. Cause is ammonium nitrate but who put the fire?

Also during the afternoon of August 4, 2020, an explosion panicked residents living around a plant of Vijayshree Pharma Company in Rambilli Zone SEZ of Visakhapatnam in Andhra Pradesh, India. Cause under investigation

Again on August 4th, an electricity cable EXPLODED in the middle of a residential street in Birmingham, UK, sending a smoke and fireball into the air and residents running inside for shelter. The explosion was so big, fire alarms went off from inside homes.

Finally, firefighters on Tuesday battled a large fire in downtown St. Paul, Minnesota, that engulfed a building under construction. Flames were shooting high into the air and the glow could be seen for miles when firefighters arrived about 4:20 a.m.

The fire broke out inside three industrial warehouses east of Tehran on Tuesday. The blaze destroyed manufacturing supplies, including lumber and leather.

Then on August 5, at least seven ships have been set ablaze at shipbuilding factory in the southern Iranian port of Bushehr. According to reports, the cause remains unclear and no casualties were reported.

The fire in Bushehr is the latest in a series of fires at sensitive and important locations in Iran in recent weeks, including an explosion at Iran’s Natanz nuclear facility on July 2, and a blast at a Tehran military facility, which have fuelled speculation of foreign sabotage.

On August 5, 2020, a large fire broke out on Wednesday evening 6:30 pm at a market in the emirate of Ajman, 50 km away from Dubai, in the United Arab Emirates, less than a day after the Beirut nitrate ammonium explosion. Cause under investigation

A large fire has broke out in the #Ajman market, located in the United Arab Emirates #UAEpic.twitter.com/g8ACVm9wPe

A natural gas pipeline exploded and several roads collapsed after heavy rains inundated parts of Yulin, a city in China’s northwestern Shaanxi province. No casualties were reported in connection with the August 5, 2020, blast, but local authorities have evacuated nearly 600 people from the area. Cause under investigation

On the same day, explosion and subsequent tank battery fire is under investigation in Midland, Texas. Cause is also unknown.

Again on August 6, 2020, a massive fire broke out in more than 20 warehouses of wholesale markets in Najaf, Iraq. Causes under investigation.

So what’s up with all these giant explosions and fires in the last few days? There are no coincidences in 2020… More explosion news on Strange Sounds and Steve Quayle. Thanks to Lorraine Cummings.

21 Things You Should Have In Your Vehicle At All Times

James Murdoch resigns from the News Corp. board

Kuwait to lift lockdown in Farwaniya on Sunday

Live: Influencers discuss the power of social media amid the pandemic 中美博主如何在社交媒体上另辟蹊径?