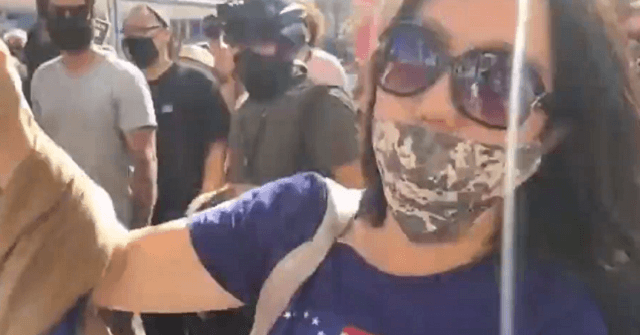 A video shot at a protest in San Francisco shows a woman wearing a t-shirt with a U.S. flag and George Washington silkscreen being harassed, assaulted, and robbed. After stealing her property, the mob continued to taunt her as she tried to walk away.

Woman being harassed, assaulted and stolen from by Antifa
San Francisco, CA pic.twitter.com/qaRwCEwaHW

One person attempted to jump past her and swiped an item from the packages she carried. A second man attacked her and wrestled away one of her items. She scuffles with several attackers before a woman on a megaphone yells, “Stop, Stop, Stop.”

The woman resumes her attempt to walk away but the crowd continues to follow and torment her. As the video ends, the woman continues to be followed and harassed by the mob.

The incident occurred as multiple protests took place across the city. This particular incident happened around the quarter from a Free Speech Protest at the Twitter headquarters on Market Street.

Fact Check: Obama Makes Misleading Virus Claim Saying 'Other Countries Not Doing as Bad as We Are'

‘This Is Us’ Creator: We Wanted Black Lives Matter Themed Season 5 Premiere to Air Before the Election

John Leguizamo: Latinos Who Support Trump Are Like 'Roaches for Raid'

Donald The Orange Returns Triumphantly As Donald The White

Pelosi: 'McConnell Is Not a Force for Good in Our Country'