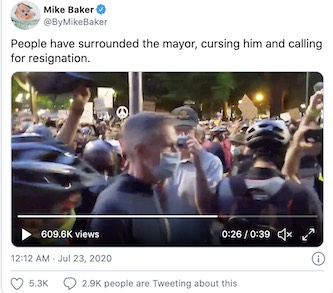 Portland Mayor Ted Wheeler joined a violent demonstration in his city Wednesday night at which “protesters” threw flaming bags of garbage at a federal courthouse — and where he was jeered by the crowd before being tear gassed by federal officers.

The Oregonian reported that the mayor’s appearance on the 56th night of violent “protest” in downtown Portland “attracted attention and jeers from the crowd of more than 2,000 people” at the Mark O. Hatfield U.S. Courthouse.

USA Today reported: “The mayor was caught in a chaotic display of violence and mayhem that began around 11:15 p.m., after some protesters threw flaming bags of garbage over a fence protecting the local federal courthouse, prompting the federal officers to fire tear gas at the crowd.”

Video shot on the scene captured Wheeler at the fence around the courthouse, with flames burning in the background: more

'Morning people' who wake up early at higher risk of Alzheimer's

Tribes In A Flux: Berbers’ houses in North Africa