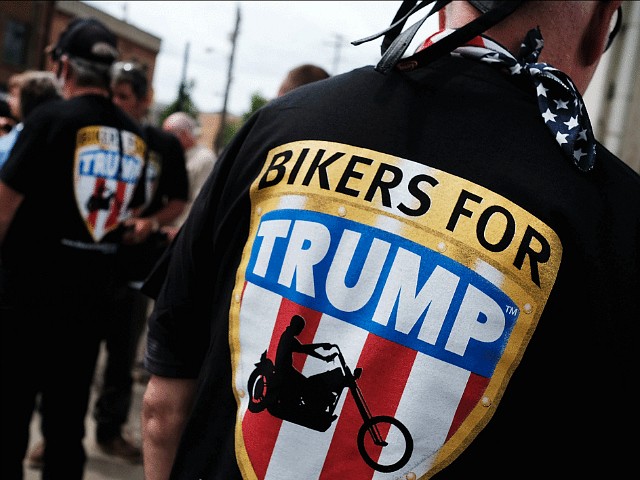 Hundreds of bikers rumbled through Orange Beach, Alabama, on Saturday to show their support for President Trump.

An estimated 800 motorcyclists attended the Bikers for Trump parade and rally that departed from the Wharf on Saturday, according to WKRG News.

“The event ended at Live Bait restaurant on Beach Road. The Bikers for Trump movement has been a growing force since the 2016 presidential election,” the report said.

According to the Bikers for Trump PAC website, it is a “grassroots organization of patriotic citizen crusaders who are committed to supporting President Trump’s agenda and upholding American liberties.”

The Alabama chapter has nearly 3,000 members on its Facebook page.

In late August, a group of bikers in Charlotte, North Carolina, also rallied for the president and police officers, according to Breitbart News.

“As we are drawing closer to the actual election we’re starting to get louder and show our support more vocally for the president in a more visual way,” said Charlotte Regional Republican Volunteer Network Founder Sean Kilbane.

Participant Thomas Mussoni told reporters it felt good to be with like-minded people.

“We’re not gonna debate issues of gun control, or of all lives matter. We’re here to say, look, we support our president,” he noted, adding, “We think he’s accomplished incredible things during his first term and we can’t wait to see what he can get done in the second.”

On October 11, an estimated 1,000 vehicles showed up for a “Trump Train” event in St. George, Utah, Breitbart News reported.

“It’s more than loving Trump; It’s about what he’s up against in D.C. because of the fact that he’s not a lifelong politician versus them. But above all, you’ll see far more American flags than you’ll see of any other kind of flag, and we’re all Americans,” said organizer Jessie Riley.

“We’re all patriots. We love the freedom we get to enjoy, and we don’t want to see those stripped away by an agenda that doesn’t line up with those values,” he concluded.

Telling the Truth About 9/11 – Is the Same Apparatus Behind the Coup Against the President?

Cotton on NYT Endorsing Biden, Claiming Bipartisanship: 'What a Joke'