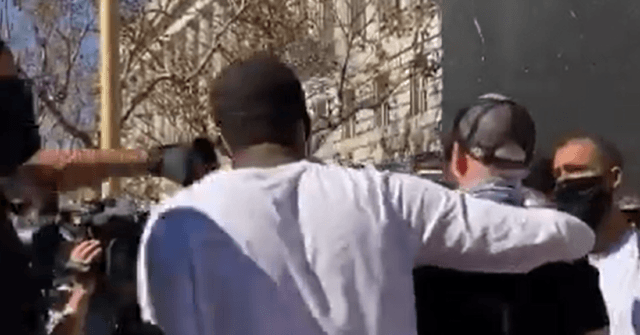 A large Antifa mob attacked a group of pro-Trump attendees of a Free Speech Rally held at Twitter’s headquarters in San Francisco. One video shows one of the men wearing black bloc sucker-punching one of the event organizers, a Black man. At least two people sustained injuries requiring medical attention during the attack.

One video shot as the protest fell into chaos shows a group of Antifa antagonists attacking a Black man who appeared to be shielding one of the white conservatives. As the video streams, a man wearing black bloc suddenly appears from the left side of the screen and punches the Black man in the face. The mob continues to chase the two men as they move to a police barricade for protection.

Another angle shows the suddenness of the attack:

The man later identified himself as Philip Anderson with Team Save America, one of the Free Speech Rally and Protest organizers. He tweeted a photo showing one of his front teeth missing and the other hanging by a thread. “Antifa attacked me for no reason,” he tweeted.

Antifa attacked me for no reason. pic.twitter.com/kDajqqyQ78

The AP photo above shows another Team Save America activist being loaded into an ambulance. The activist told the reporter he had been attacked by the counter-protesters.

The AP reported that “several hundred counterprotesters descended on the conservative protesters.

Tensions flaring again. Looks like somebody was knocked to the ground. pic.twitter.com/LnhuqT13dL

Anderson told the AP these “counterprotester hypocrites” are the reason why he is voting for President Donald Trump.

“I love America, I love this country and I love free speech,” Anderson said.

Hollywood Celebs Are (Still) Going Nude to Get Out the Vote

The Assault on America

Biden And Campaign To Be Sued By Kyle Rittenhouse For Libel

Biden Trashes America To Suck Up To Left

Pope Francis: I Dream of a Europe that Protects Life ‘in the Womb Until its Natural End’

At the Barbershop, Black Men Aren’t Sold on Biden and Harris