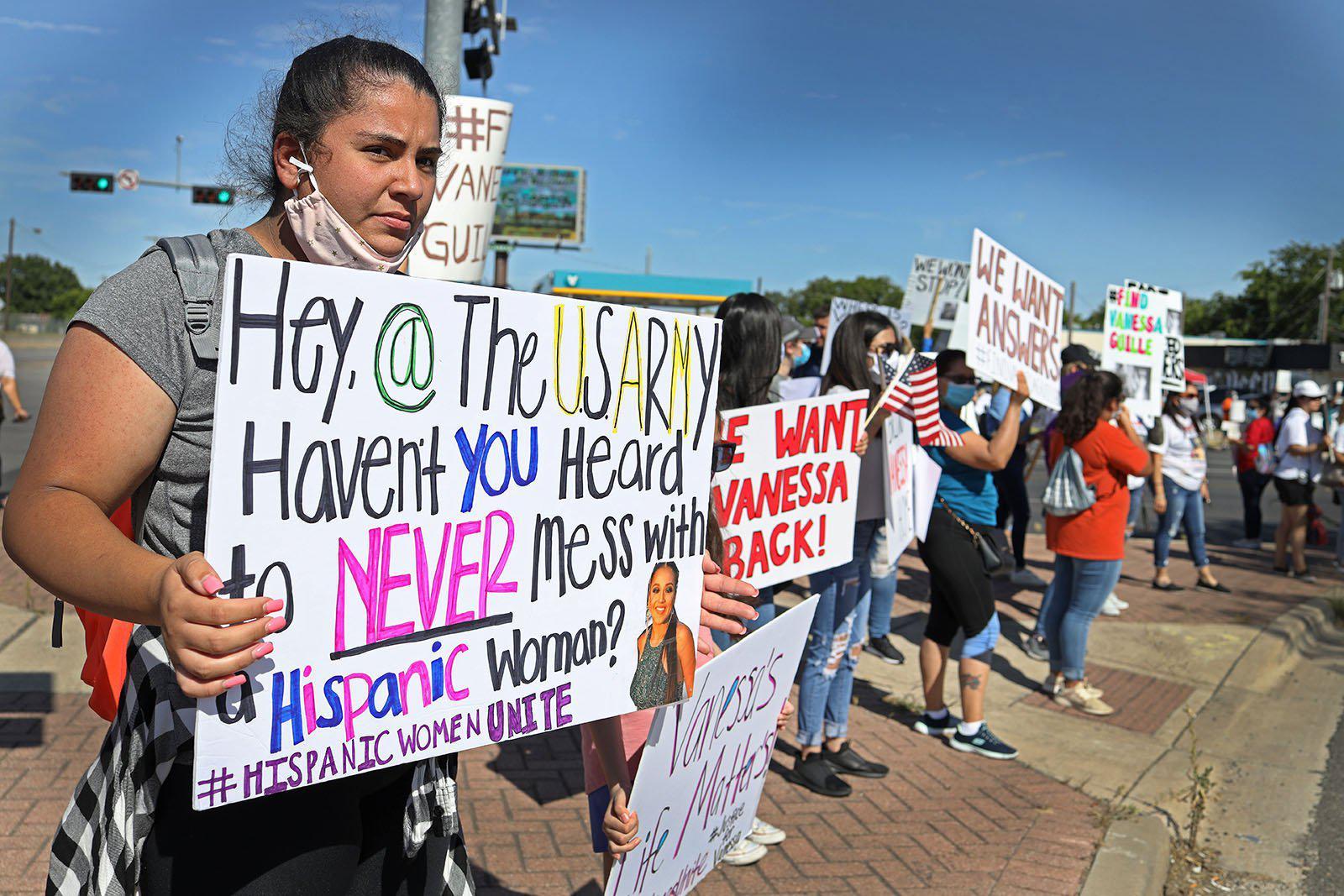 Over 100 protesters marched from Grandview Park to Fort Bliss on Saturday to protest the Army’s handling of the disappearance of Pfc. Vanessa Guillen and demand accountability from authorities.

Guillen, a soldier at Fort Hood, went missing in April and is presumed to have been murdered by a fellow soldier.

Guillen’s family has alleged that she had been sexually harassed by Spc. Aaron Robinson, who allegedly killed her with a hammer in the armory room where she worked after she told him of her plans to file a complaint.

Officials at Fort Hood have said that they were not aware of any complaints of sexual harassment against Robinson, who is the main suspect in her disappearance. Robinson killed himself on Wednesday when police confronted him in Killeen, Texas.

Guillen’s disappearance has prompted acts of solidarity across the state and beyond, including a mural in her hometown of Houston.

As the sun set, the crowd arrived outside Fort Bliss’ Cassidy Gate and stood in front of a row of plastic barriers chanting “say her name,” and “no justice, no peace.”

The protest’s stated demands were a congressional investigation into Guillen’s case, the reprimand and firing of those in Guillen’s chain of command, the removal of military recruiters from schools, the shutdown of Fort Hood, and a boycott of the military by Black and Indigenous people.

Addressing the crowd with a bullhorn, protester Erik Armendariz made a sweeping call for police and military abolition.

“There is no reform for institutions like the military and the police,” he said. “These institutions center violent men and histories of white supremacy.”

Support for major structural change among the protesters was inconsistent. Sylvia Galvan, whose husband is a soldier, told the crowd that she does not want to see Army recruiters removed from schools.

She was, however, outraged by Guillen’s death and upset to see many of her fellow military spouses “more worried about the [protesters’] demands than about the murder of Vanessa Guillen.”

Nubia Legarda, who organized the protest, said that the goal of the demonstration was not to express hostility towards military personnel, but to bring together community members angered by Guillen’s case.

“Our main purpose was not to alienate active military or veterans. We want to make sure that they are included because we lost one of our own,” she said. “I’m sure that people in the service feel the same way.”

Diana Ramirez of the National Women’s Law Center called on the demonstrators to contact their representatives in support of the Military Justice Improvement Act.

The bill, introduced last June by New York Senator Kirsten Gillibrand, would give independent military prosecutors the decision of whether to prosecute serious crimes committed by military personnel, rather than having it handled within the chain of command.

Guillen’s was not the only death commemorated by the demonstration.

Among the protesters were family members of Erika Gaytan, an El Paso woman who has been missing since July of last year and is believed to have been murdered and her remains buried somewhere in Red Sands.

Addressing the crowd in Spanish, Gaytan’s mother Guadalupe expressed solidarity with the Guillen family and pleaded for help with finding her daughter’s body.

Other protesters had signs bearing the names of Pvt. Gregory Wedel Morales and Pvt. LaVena Johnson. Morales, another Fort Hood soldier, went missing in August of last year and his remains were recently discovered in a field near the Army base. Foul play is suspected in his death. Johnson died in Iraq in 2005. Her family disputes the Army’s designation of her death as a suicide and suspects that she was murdered.

Biden Now 'Open' to Court-Packing: 'It Depends on How' Senate Handles Barrett Nomination

Biden: Unlike The African-American Community, The Latino Community Is An Incredibly Diverse Community

Tailgating Is Banned Prior To Virginia Tech Football Games

After Avoiding Chris Wallace for Weeks Biden Gets Some Bad News, Forced To Face Him in First Debate

VIDEO: Black Woman Refuses To Move For White Flight Attendant…Shouts In Face Of Passenger: “Wake up, it’s 2020!…You don’t have white privilege over me”

Baby Was Infected With Coronavirus in Womb, Study Reports

Mark Levin Blasts Harris’ Extreme Record: “She is farther left than 97 percent of Democrats in the United States Senate.”