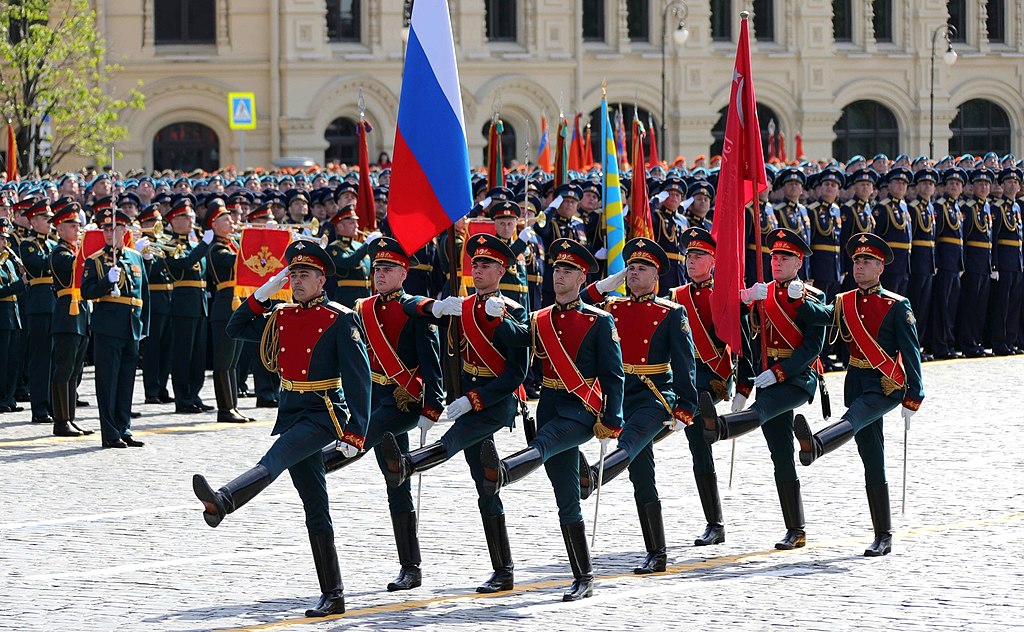 Russia staged a postponed Victory Day military parade in Moscow on June 24 with President Vladimir Putin seeking to solidify support ahead of a referendum that could pave the way for his extended rule.

The parade commemorating the 1945 defeat of Nazi Germany in World War II is traditionally held on May 9.

Putin reluctantly postponed the event until June 24 because of the coronavirus pandemic. The date coincides with the 75th anniversary of the first Soviet Victory Day parade in 1945.

For Putin, the event is particularly significant this year as it falls ahead of a July 1 national vote on controversial amendments to the constitution that would open the door for the Russian leader staying in power until 2036. That vote had been scheduled for April 22 but was also postponed because of the pandemic.

Since coming to power two decades ago, Putin has sought either as president or prime minister to restore symbols of the Soviet and Russian past to boost patriotism.

On June 14, a new Cathedral of the Russian Armed Forces was consecrated outside Moscow to mark the 75th anniversary of the end of what the Kremlin calls the “Great Patriotic War,” a conflict in which more than 20 million Soviet soldiers and citizens perished.

But the spectacle of military might in Moscow’s Red Square – involving some 14,000 troops from 13 countries, more than 200 historic and modern military vehicles, and 75 aircraft – was overshadowed by the ongoing coronavirus pandemic.

Most of the troops in the parade were from Russia. Also taking part were forces from Azerbaijan, Armenia, Belarus, China, India, Kazakhstan, Kyrgyzstan, Moldova, Mongolia, Serbia, Tajikistan, Turkmenistan, and Uzbekistan.

Russia has reported 600,000 coronavirus infections, giving it the third-highest number in the world. Deaths stand at more than 8,000, but real numbers are believed to be much higher.

Putin has spent much of the pandemic conducting affairs of state remotely from his residence outside Moscow.

On June 24, the Kremlin limited access in Red Square to the area where Putin sat along with foreign leaders and World War II veterans of Soviet forces.

Those veterans had been placed under quarantine ahead of the parade.

Soldiers taking part in the parade also had been tested and placed in quarantine ahead of the parade.

Speaking from a podium on Red Square, Putin told the gathering: “It’s impossible to imagine what would have happened to the world if the Red Army hadn’t defended it.”

Putin said Soviet soldiers “did not need war, nor other countries, nor glory, nor honor. They sought to finish off the enemy, win, and return home. And they paid an irreplaceable price for the freedom of Europe.”

Moscow Mayor Sergei Sobyanin had urged spectators to stay at home and watch the parade on television. Meanwhile, several cities that would normally hold smaller parades canceled them or went forward without crowds.

Many foreign leaders also stayed away. The presidents of France, the Czech Republic, Croatia, and China had planned to attend the parade on May 9. But they all canceled their plans to travel to Moscow after the event was rescheduled for June 24.

Kyrgyz President Sooronbai Jeenbekov traveled to Moscow for the event but missed the parade after two people aboard his flight to the Russian capital tested positive for COVID-19 upon their arrival.

Jeenbeekov’s office told RFE/RL’s Kyrgyz Service that the head of the presidential office’s foreign policy unit, Daniyar Sydykov, and a bodyguard had tested positive for the coronavirus.

The presidents of Belarus, Kazakhstan, Moldova, Serbia, Tajikistan, and Uzbekistan all attended the gathering — sitting together in a section with Putin and the World War II veterans.

The de facto leaders of Georgia’s breakaway regions of South Ossetia and Abkhazia, which Russia recognizes as independent states, also attended, along with the Bosnian Serb member of Bosnia’s multiethnic presidency, Milorad Dodik.

After the parade, Putin laid a wreath at the Tomb of the Unknown Soldier at the Kremlin Wall to honor the memory of those killed in World War II.

Later, at a ceremony in the Kremlin, Putin handed the 2019 State Prizes to laureates for achievements in science and technology, literature and the arts, and for humanitarian activities, charity, and human rights.

The ceremony for awarding the State Prizes is usually held on Russia Day — marked each year on June 12.

But this year, Putin presented Gold Star of Labor Hero medals to several laureates instead.

The State Prize is Russia’s highest award for scientific and cultural contributions to society and the state. In 1992, the award replaced the Soviet-era State Prize of the Russian Soviet Federative Socialist Republic.

Trump’s Warning That Biden Would ‘Abolish the Suburbs’ Isn’t Racist, and It Isn’t Hyperbole, Either

Inmates tried to infect themselves with coronavirus to get early release, Los Angeles sheriff says

Spotted a double rainbow yesterday… does that mean things will be getting better?

Involvement In Workplace Democracy Can Alter Your View Of Authority

It looks like TikTok isn't selling its US operations after all. Now, the app's US future hangs on whether Trump walks back an executive order.

McEnany: Barr is looking for the truth behind ‘Russiagate’