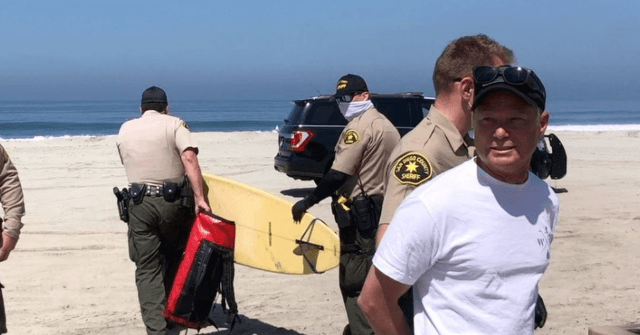 Three people were arrested Saturday for going to a closed beach in the San Diego area to protest the county’s stay-at-home order and beach shutdowns, deputies said.

The San Diego County Sheriff’s Office said about 75 to 100 people showed up to protest at Moonlight Beach in Encinitas, and three of the protesters were arrested for refusing to comply with state and county public health orders.

A cell phone video shared on the @openencinitas Instagram account shows one protester being led away in handcuffs by a police officer while he yelled, “This is America!”

Protesters planned another demonstration on Sunday at the Pacific Beach lifeguard station starting at 1 p.m. PST.

Area beaches, including Encinitas, will be partially reopened starting on Monday. Californians have been going to the beach this weekend, regardless of whether they were open or closed.

Thousands of Californians throughout Southern California have been flocking to open beaches in Orange County, despite Democrat Gov. Gavin Newsom’s stay-at-home order due to a heat wave.

Many of the beachgoers appeared to be less than six feet apart, and many were not wearing masks. Newport Beach-area lifeguards estimated at least 40,000 beachgoers on Friday — double the amount they saw the day before.

Newsom said he expected the state’s beaches to see “a significant increase in volume” due to the heat wave, and pleaded for those beachgoers to practice proper social distancing.

California has a total of 39,867 active coronavirus cases, with 1,684 deaths as of Sunday.

Six seated exercises to keep you limber at your desk

It’s time to organize protests, lawsuits against lockdowns and other COVID-19 mandates