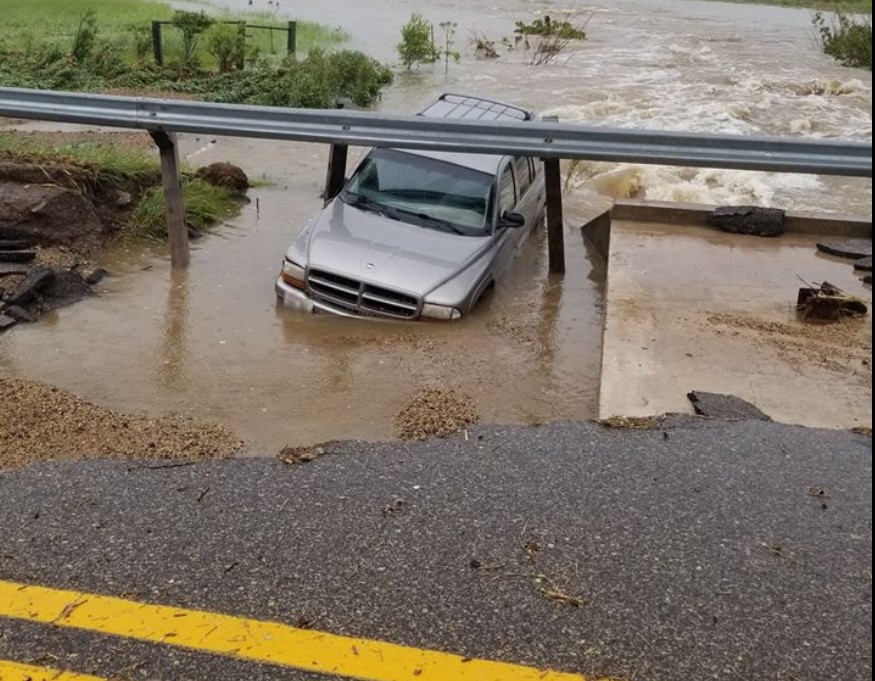 Deadly flash floods in Wisconsin on June 29, 2020. Picture via Facebook

Officials in St. Croix County in western Wisconsin declared a state of emergency on 29 June after major flash flooding.

In a statement, county officials said: “On June 28 and 29, parts of St. Croix County received over seven inches of rain causing flooding and washed out roads across the county.

One of the reasons U.S. Highway 63 was closed today north of Baldwin #Wisconsin #wiwx pic.twitter.com/hy2H0sUtZM

Rainfall map and list of highest measurements from the last 24 hours ending around 7 AM this morning. Locations highlighted in red have received over 4″ of rainfall. Over 8″ was reported near Baldwin, WI. List of rainfall reports by county: https://t.co/cYtB4axXTe #mnwx #wiwx pic.twitter.com/76D2oUAKFr

At one point over 50 roads were closed in the area due to flooding.

The Sheriff’s Office also said that at least eight families were evacuated from houses near an overflowing creek and taken to a nearby community centre. – Floodlist

Meanwhile, portions of the Wood River Valley in Idaho woke up to more than 6 inches of snow on Monday morning, as the end of June looked more like a mid-winter morning.

Galena Summit saw more than 6 inches of snow on Monday, an uncommon occurrence at the end of June in Idaho. Picture: Eric Brill / KMVT

The mountain towns within the Central and Sawtooth Mountains were a little bit too warm too see any of the white stuff fly, but once you were able to get above approximately 6,700 feet, snow started to cover the ground.

At Galena Summit, which is approximately midway between Ketchum and Stanley, saw more than 6 inches of snow. This is at approximately 8,700 feet above sea level, and of course, the higher you are above sea level within this part of the Central and Sawtooth Mountains, the more snow you will see.

Luckily, with temperatures last week as well as Saturday in the 70s for highs, the snow wasn’t able to accumulate very much on Highway 75.

With that noted, the threat of snow is expected to linger around until Tuesday. Another 2-4 inches of snow will be possible, with the majority of the accumulation happening on grassy surfaces, as well as the majestic trees of the Sawtooth National Forest.

While the snow isn’t the most common thing to see in southern Idaho for late June, the amount of snow that is accumulating within this specific storm is uncommon. – KMTV

So, you want to escape the summer heat? Here’s some summer snow in Idaho! More anomalous weather phenomena on Strange Sounds and Steve Quayle. Now if you are looking for supplements to increase your healthy lifestyle and sexlife please visit Natural Health Source. Thank you for your support!

TEXAS: Store Gives ‘Defund The Police’ The Finger With…

'Speak and be heard': Why black media matters

Fourth Christian in Less than Two Months Killed in India

How to make your own Shooting Range | Build and Targets

Watch: Black Texas Man’s Grandmother Stands Between Him and Gun-Wielding Police Officers…All Because He Reportedly Ran a Stop Sign

The frailty of life and urgency of compassion

The True Cost of Dollar Stores

Banish Trump to the Anticanon

Trump speaks to press before trip to Kenosha, WI

People don’t want to defund the police. Can you blame them?