The unelected members of the House of Lords were outraged by a cut to their £323 daily allowance to £162, a Freedom of Information (FOI) request has revealed. The payment is made for those who “actively participate” in debates, as part of the changed response to Parliament’s working hours.

But in an incredible appeal, revealed in a FOI request shared by the Scottish National Party with Express.co.uk, peers complained about the move to the Lords’ Commissioner.

One unelected peer claimed: “A number of Peers have been financially embarrassed by the present arrangements.”

Another peer queried: “If there was any chance of setting up a hardship fund for members in financial difficulty during this time?”

Another Lord said “I would be very disappointed to give up my lease and then find things back to normal” while a colleague remarked peers may be forced to resign from their roles as “the financial pinch is so horrible”. 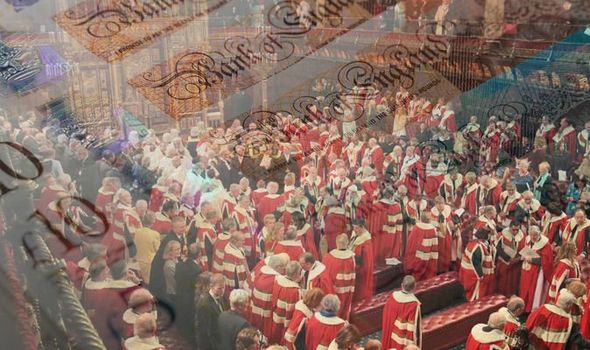 Lords are complaining about a paycut (Image: GETTY•PA)

A fellow Lord also claimed the pay cut has left them “feeling exploited” and “completely undervalued”.

One peer remarked the changes to pay are “not even minimum wage”, referring to the National Minimum Wage for a worker over 25 in the UK is currently £8.72 per hour.

Another peer said the system was unfair because Peers could queue to speak in a debate but would not be paid if they didn’t contribute before it ended.

The added: “This means that you can sit in front of your computer at home for the length of Question Time with a wish to speak, but should you not be reached you get zilch whilst anyone who has had a supplementary walk away with £162.

The Scottish National Party made FOI requests to the Lords (Image: Getty )

“That is plainly inequitable.”

But one Peer warned: “For those Committee members who don’t have private wealth or a pension it is quite difficult as that time is obviously a time when one can’t do other work that we need to in order to pay the mortgage etc.”

She added: “How dare these peers complain they aren’t paid enough when thousands of people across Scotland are struggling just to make ends meet due to the financial impact of Coronavirus.

The TUC is urging the government to extend the Furlough scheme (Image: Getty )

“These Lords are out of control – only Communist China has a bigger legislative body – and even more members of the privileged elite, like Baroness Ruth Davidson, will be skipping down the road to join them very shortly.

“It’s time to put the brakes on this gravy train and abolish the House of Lords for good.”

Danielle Boxall, Media Campaign Manager at the Taxpayers Alliance, told this website: “When many citizens are feeling the pinch or at risk of redundancy, it’s ridiculous that the well-heeled House of Lords considers themselves hard done by.

“Despite the devastating impact of the covid crisis, the upper house blue-bloods are continuing to cash in on payments for virtual appearances.

“Moneyed members should think twice before complaining and concentrate on doing their duties.”

It comes as former Scottish Tory leader Ruth Davidson is due to take up a seat in the House of Lords after receiving a resettlement grant of £53,725 as she steps down from Holyrood.

“The issue of allowances is a complex matter and the Commission gave considerable thought to how to respond to this unprecedented situation, in the full knowledge that there were no easy solutions.

“The temporary allowance system that reduced allowance rates by 50% was considered appropriate for the changed circumstances where most Members were working from home. It was agreed by the House as a whole on 6 May 2020.

“The House of Lords is a highly effective and busy Chamber, performing a vital role of improving legislation and holding the Government to account.”

TUC general secretary Frances O’Grady said: “Unemployment isn’t just miserable for families, it will hold back the economy, just at the time when if we are facing further spikes and lockdowns we need more support.

“We’ve put forward proposals to the Government for a job retention and upskilling scheme and I’m really appealing to the Chancellor to stand by working families and keep people at work.”

She described the furlough scheme as a success, stating it is “too soon to pull the plug”.

“The problem is if the Government doesn’t act now we could be facing mass unemployment and we know how much harm that does to the economy and how much more expensive it is in the long run.”

American America Haters – You Are Your Own Oppressors

QUICKSAND GOT ME WHILE SETTING TRAIL CAMERAS!

Flynn exonerated and his grandson says all we need to hear

Dominica thanks China for help as COVID-19 situation eases