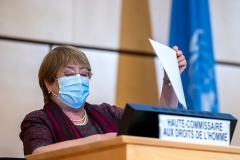 (CNSNews.com) – As the U.N. Human Rights Council began a new session on Monday, it faces growing calls to confront China, a country that has been a perennial fixture on the Geneva-based body yet has escaped censure for human rights violations at home.

More than 300 rights-focused non-governmental organizations (NGOs) from across the globe are urging the U.N. to end China’s “impunity,” citing mass abuses against minority Uighur Muslims in Xinjiang, the crackdown in Hong Kong, suppression of information relating to the coronavirus outbreak, online censorship and digital surveillance, among other concerns.

“No state should be above the law,” they wrote in an open letter to U.N. member-states, U.N. Secretary-General Antonio Guterres, and High Commissioner for Human Rights Michelle Bachelet.

“A state that tries to hold itself above any kind of scrutiny presents a fundamental threat to human rights. That China – a state with extraordinary global power – expects such treatment affects us all.”

The civil society groups threw their support behind a call last June by a group of independent rights experts (“special rapporteurs”) for the HRC to hold a “special session” on rights violations in China, and to establish a special mechanism to monitor and report annually to the council on the human rights situation in China.

China has occupied one of the 47 seats on the HRC every year since the council was created in 2006, except for two mandatory stand-down periods, in 2013 and 2020. In an election next month, it is virtually guaranteed to return for a new three-year term for 2021-2023.

Of more than 235 country-specific resolutions adopted by the HRC since 2016, not one has criticized China’s human rights record. (More than 75 have targeted Israel alone.)

Beijing is confident of the support it enjoys from allies at the U.N.

(As reported at the time, 22 of those 46 nations backing Beijing’s treatment of minority Muslims were Muslim-majority countries.)

Earlier another ministry spokesman reacted dismissively to the concerns raised in the NGOs’ letter.

“The groundless allegations of these organizations are not worth refuting,” said Zhao Lijian in response to a question about the open letter. China characterizes its mass incarceration of Uighurs as a education and vocational program targeting radicals.

Beijing is famously sensitive about human rights criticism, and its delegation at the HRC has on a number of occasions interrupted NGO representatives mid-flow as they have raised concerns relating to China.

During a regular session in July last year, for example, the Chinese delegate reacted by a statement on Hong Kong by the Geneva-based NGO, U.N. Watch, by repeatedly interrupting the speaker, accusing the NGO of abusing its accreditation, violating U.N. rules for civil society participation, and engaging in “slandering and accusations on China’s sovereignty and internal affairs.”

When U.N. Watch executive director Hillel Neuer on another occasion spoke about abuses against Uighurs in Xinjiang, Chinese delegates banged on the desks and repeatedly demanded that the presiding officer cut him off.

‘When conditions are conducive’

The HRC holds three regular three-week long sessions a year, and on Monday Bachelet opened a new one with an address that touched on human rights situations in 36 countries or regions around the world.

In the brief section on China in her speech, the language was notably cautious.

Bachelet encouraged Hong Kong authorities to review the controversial national security law imposed by Beijing “in response to any negative consequences it might have on the enjoyment of human rights.”

In Xinjiang, she said she was “concerned about the Uighurs.”

“My office continues to engage with the Chinese government on the situation in the Xinjiang Uighur Autonomous Region and the impact on human rights of its policies,” Bachelet said. “Following an invitation extended by the government of China, I have been discussing with the authorities the conditions of a possible visit to Xinjiang when conditions are conducive.”

In contrast, Bachelet when referring to situations elsewhere used terms like “violations,” “intimidation,” “killings,” “torture,” “violent repression” and “excessive use of force.”

HRC membership is staggered, with roughly one-third of the seats coming up for election each year. Next month the U.N. General Assembly in New York will hold an election to fill 15 seats.

Four of those seats are reserved for the Asia group, and China is one of five candidates. The other four are Saudi Arabia, Pakistan, Uzbekistan, and Nepal.  China, Saudi Arabia, and Pakistan have each served four terms on the council, and have never lost an election.

They and other rights-abusing regimes have been elected onto the HRC despite an appeal in the council’s founding resolution for U.N. member states to consider candidates’ contributions “to the promotion and protection of human rights,” when voting to fill its seats.

Because the General Assembly votes by secret ballot, countries aren’t held accountable for their voting decisions.

After an unsuccessful effort to promote reforms, the Trump administration withdrew from the HRC in 2018, citing the fact that egregious human rights abusers are frequently members, and its disproportionate critical focus on Israel.

The Democrat Party platform includes a pledge to “rejoin and reform” the council.

Bypassed by Biden, Abrams likely to focus on 2022 rematch against Kemp

US Supreme Court refused to block first federal executions since 2003

Meghan, Prince Harry sue over photo of son taken at their L.A. home

The Superman of Supplements

Pelosi on Trump Administration: ‘Where They Are in All of This is an Insult to the Intelligence of the American People’

Encore- Pandemic is Pretext to Implement “The Plan”

'A bloody method of control': the struggle to take down Europe's razor wire walls

People who lent their names to words