The UK saw a scorching three-day heatwave this week as summer made its striking comeback in September. Hot temperatures will blast Britain through the weekend and into next week.

But forecasters have warned that the weather will continue to get more unsettled with heavy showers expected in the south.

Next week will start with highs of 23C in the South East of England.

The weekend will experience similar hot temperatures despite the beginning of Autumn.

On Thursday, Britain will continue to see plenty of sunshine for most areas. 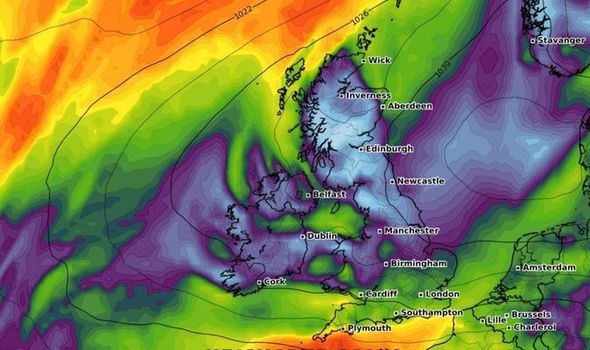 Britain will continue to be hit by unseasonably hot temperatures today (Image: WXCHARTS)

Jo Farrow, Netweather Meteorologist, said: “Tomorrow there will be plenty of sunshine, especially for central and eastern Britain.

“Early cloud over Wales and western England should shift, Northern Ireland keeps some cloud but will be bright and it will be more patchy over Scotland.

“But still a fine dry day on Thursday.”

Ms Farrow warned of Atlantic low pressure which is influencing the UK weather.

Britain will continue to see plenty of sunshine for most areas on Thursday (Image: WXCHARTS)

She wrote: “A non-tropical area of low pressure is located over the far north-eastern Atlantic Ocean a few hundred miles northeast of the Azores.

“This system could acquire some subtropical characteristics while it moves south-eastward and eastward.”

High pressure is sweeping over the UK bringing settled and sunnier conditions.

Matthew Box, Met Office Meteorologist, said the mercury level rocketed up to 26.8C at Hurn in Dorset on Wednesday.

Mr Box said: “At the moment it looks like pretty limited heatwave criteria has been met really, limited really almost just to the south coast, or parts of the south coast.

“Areas around Bournemouth have met that criteria.”

This month has seen four-year record high September temperatures with highs over 30C.

Mr Box highlighted how the heatwave mainly hit the south due to warm air being pushed by a cold front coming down across the UK.

From Saturday to Sunday there will potential for heavy rain outbreaks in the south (Image: WXCHARTS)

But sunshine is forecast for most of the UK on Thursday.

Although temperature will not be quite as high as the last few days.

Southern parts of the country can expect 23C or 24C on Thursday.

On Friday there will be settled conditions through to the weekend before showers start in southern counties.

From Saturday to Sunday there will potential for heavy rain outbreaks in the south, but elsewhere in the UK will be mostly dry.

‘I’m not a bad guy’: George Floyd cries out in new body-cam footage

Pay Off Debt Now or Wait On My Parent’s Help?

England faces a 'cascade' of new coronavirus cases and could be heading towards a second 'hard' lockdown, an expert has warned

Why Biden’s Lead Will Evaporate