The weather in the UK has slowly been getting colder as Brits prepare to usher in the winter season. While rainfall and strong winds have been common weather patterns, snow hasn’t been on the cards – until now. The latest maps and weather forecasts from NetWeather show parts of Britain are likely to be hit with snow over the coming days.

Freezing air coming in from the Arctic will take hold of Britain in a northwesterly direction at the end of this month, bringing snow and icy, freezing temperatures with it.

As it stands, weather maps from NetWeather for October 30 – in just 12 days – shows the north and Scotland bearing the brunt of the bad weather.

Parts of central Scotland will definitely see snow hitting, while neighbouring regions are likely to get some as well.

The map shows the North is increasingly likely to get some of the fallout from the snow due to its geographical proximity to the worst-hit areas. 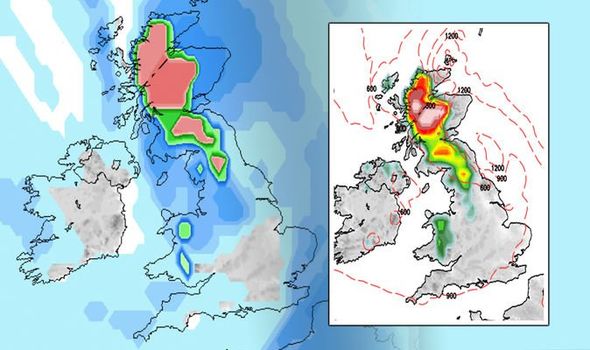 Wales and the west of England could see some snow fall, but much less likely than other parts of Britain further north.

Those living in the south, such as London and Kent, and the Midlands, are unlikely to have any snow reach them.

Maps show this area as being largely clear of extreme weather patterns for this time period.

Similarly, maps show areas of Northern Ireland forecast to be hit by snow as well, although nowhere near as much as in Scotland.

UK snow map: The UK will experience a drop in temperatures (Image: The Weather Outlook)

As the day progresses, the snow in the North will largely subside until the northern-most regions of Scotland are the only snowy areas left.

The west of England, however, alongside Wales, are much more likely to see snow fall in the late hours of the day, starting from around 6pm.

By October 31, the snow is expected to have dissipated in all areas of Britain.

Forecaster Brian Gaze from the Weather Outlook warned of an “early winter” striking, with freezing temperatures expected across the British Isles.

UK snow map: Scotland and the North will bear the brunt of the snow (Image: NetWeather)

Mr Gaze said: “It looks like an early winter, with the cards stacked in favour of a cold second half of Autumn.

“-10C is expected in Scotland and -7C in England by late November, with snow on Scottish mountains now, in northern England from early November and the South at risk from late November.”

It comes as the Met Office predicted wintery weather between Tuesday, October 27, and Tuesday, November 10, in its long-range weather forecast.

The Met Office writes: “Confidence becomes low towards the end of the month.

“However, the early part of the forecast will likely see a gradual transition to a generally more unsettled pattern across the whole of the UK.

“Spells of rain and showers are likely, with these turning wintery over high ground in the north and north-west.

“There may also be the odd settled spell at times during this period, but they are likely to be short lived.”

The weather isn’t expected to get any better, according to the Met Office, which has predicted overnight fog and frost hitting Britain from November 1, to November 15.

Exactly How Much Water Should You Drink In a Day?

This New Japanese Towel Trick Will Get You Abs in 10 Days – Wait, What?

America Threatens to Evacuate its Largest Diplomatic Mission on Earth

Boris Johnson is told to end his 'women problem'

Cryptocurrency as an alternative during times of inflation