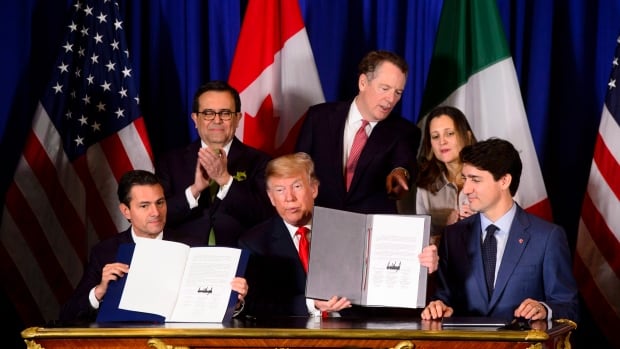 The new North American trade agreement is officially the law of the land, and the Trump administration is vowing to ensure that Canada, Mexico and the United States live up to their obligations.

U.S. trade ambassador Robert Lighthizer has issued a statement marking today’s coming into force of the Canada-U.S.-Mexico Agreement on trade (CUSMA), and promises to ensure that its rules and obligations are enforced.

In it, he hails the deal as the signature accomplishment of U.S. President Donald Trump and a “monumental change” that will benefit American workers, farmers and ranchers instead of multinational corporations.

Kirsten Hillman, Canada’s ambassador to the U.S. and a central player in the negotiations, said the agreement is designed to ensure more people in all three countries can reap its benefits.

That was the enduring flaw within the previous NAFTA agreement, which has been derided for years in the U.S. as a principal reason why manufacturing jobs migrated to Mexico.

The new deal has more stringent labour provisions that require more products to be built with well-paid labour in order to qualify for duty-free treatment.

How The Fed Bubble Ends | What You MUST KNOW

House punts return until Friday at the earliest