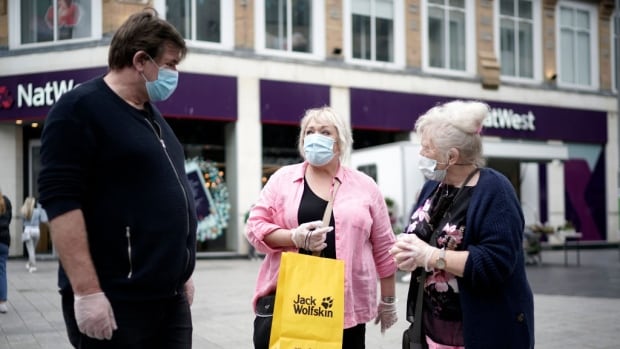 People wear face masks and wear gloves as they shop on Tuesday in Liverpool, United Kingdom. People entering shops will be required by law to wear a face mask starting July 24, but the Health Minister Matt Hancock said Wednesday the government won’t be recommending masks be worn in offices. (Christopher Furlong/Getty Images)

British Health Minister Matt Hancock said that the government would not be recommending that people wear face masks in offices, after speculation that rules for work places could follow shops.

“We will not be recommending masks in the office,” Hancock told Sky News on Wednesday.

Shoppers in England will have to wear face coverings in shops and supermarkets starting July 24 to help reduce the risk of a new pick-up in the spread of the coronavirus, the Prime Minister Boris Johnson said on Monday.

Hancock told the BBC that the government had looked at making wearing masks in offices but rejected the idea on the basis that if people spend a long time together, face coverings do not offer protection.

“It’s interaction with people who you aren’t normally with, and that’s where the mask can be particularly helpful,” he said.

Face coverings are already compulsory on public transport in England.

The Telegraph newspaper reported earlier on Wednesday that the government could soon recommend face coverings in all public places including offices and other workplaces.

Asked about the report on the BBC, Hancock said: “No… It’s something that we’ve looked at and rejected.”

Are You Thinking What I’m Thinking? 2A

Annual Press Freedom Rankings: Canada is #16 but America is #45? Where does China rank?

Way to Go: BLM Idiots Vandalize Statue of a Former Slave Outside Black Church in Kentucky

AAP sale finalised to save newswire