Twitter has once again censored the Republican candidate for Delaware’s U.S. Senate seat, Lauren Witzke, over a tweet drawing attention to the consequences of mass immigration for Europe.

As Breitbart News previously reported, Witzke has already been locked out of her Twitter once this month.

The far-left platform, whose CEO, Jack Dorsey, will likely be subpoenaed by the Senate Judiciary Committee next week over its censorship of the New York Post’s bombshell Biden-Ukraine story, said the tweet constituted “hateful conduct.”

“Let’s be clear, mass migration absolutely destroyed Europe,” said Witzke in her tweet. “Italy, France, Sweden and Germany took in tons of migrants who never assimilated. Rapes, murders, and other heinous crimes abound. I will end ALL immigration into the US for ten years.”

Twitter said the tweet violates its rules against “hateful conduct,” warning the senate candidate that repeated violations would result in the termination of her access to the platform.

Twitter has now censored the Republican candidate again, over a tweet containing a graphic image of the severed head of a teacher in France, who was decapitated by an Islamic terrorist while walking in a Paris suburb.

The teacher had discussed cartoon drawings of the Prophet Mohammed in his class — cartoons that Islamic terrorists have used to justify acts of mass violence in the past, notably the 2015 massacre of French cartoonists working for the satirical magazine Charlie Hebdo.

“The gift that keeps on giving!”

Twitter responded by locking Witzke’s account, calling it a violation of its rules against posting media depicting gratuitous gore. 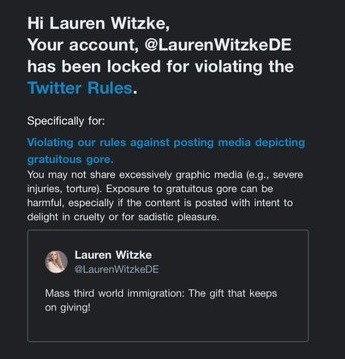 Witzke was required to delete her tweet before returning to the platform. Upon her return, she called reporters at the establishment conservative publications RedState and the Washington Examiner for allegedly reporting her tweet.

Looking forward to apologies from weak “conservatives” @SirajAHashmi of Washington Examiner, and @BeccaJLower of RedState for reporting my factual Tweet and calling for my censorship.https://t.co/5Qubylu1K1

“Back from my SECOND Twitter suspension this week,” said Witzke. “Looking forward to apologies from weak “conservatives” @SirajAHashmi of Washington Examiner, and @BeccaJLower of RedState for reporting my factual Tweet and calling for my censorship.”

Allum Bokhari is the senior technology correspondent at Breitbart News. His new book, #DELETED: Big Tech’s Battle to Erase the Trump Movement and Steal The Election, which contains exclusive interviews with sources inside Google, Facebook, and other tech companies, is currently available for purchase.

Germany is beginning a universal basic income trial with individuals getting $1,400 a month for 3 years

Stoking his base, Trump warns of a Kamala Harris presidency

Bars in Paris before and after Covid curfew – in pictures

Gavin Newsom Pulls Out of DNC Appearance Amid California Fires

Electoral college explained: how Biden faces an uphill battle in the US election

Hundreds gather outside US Supreme Court to mourn ‘RBG’