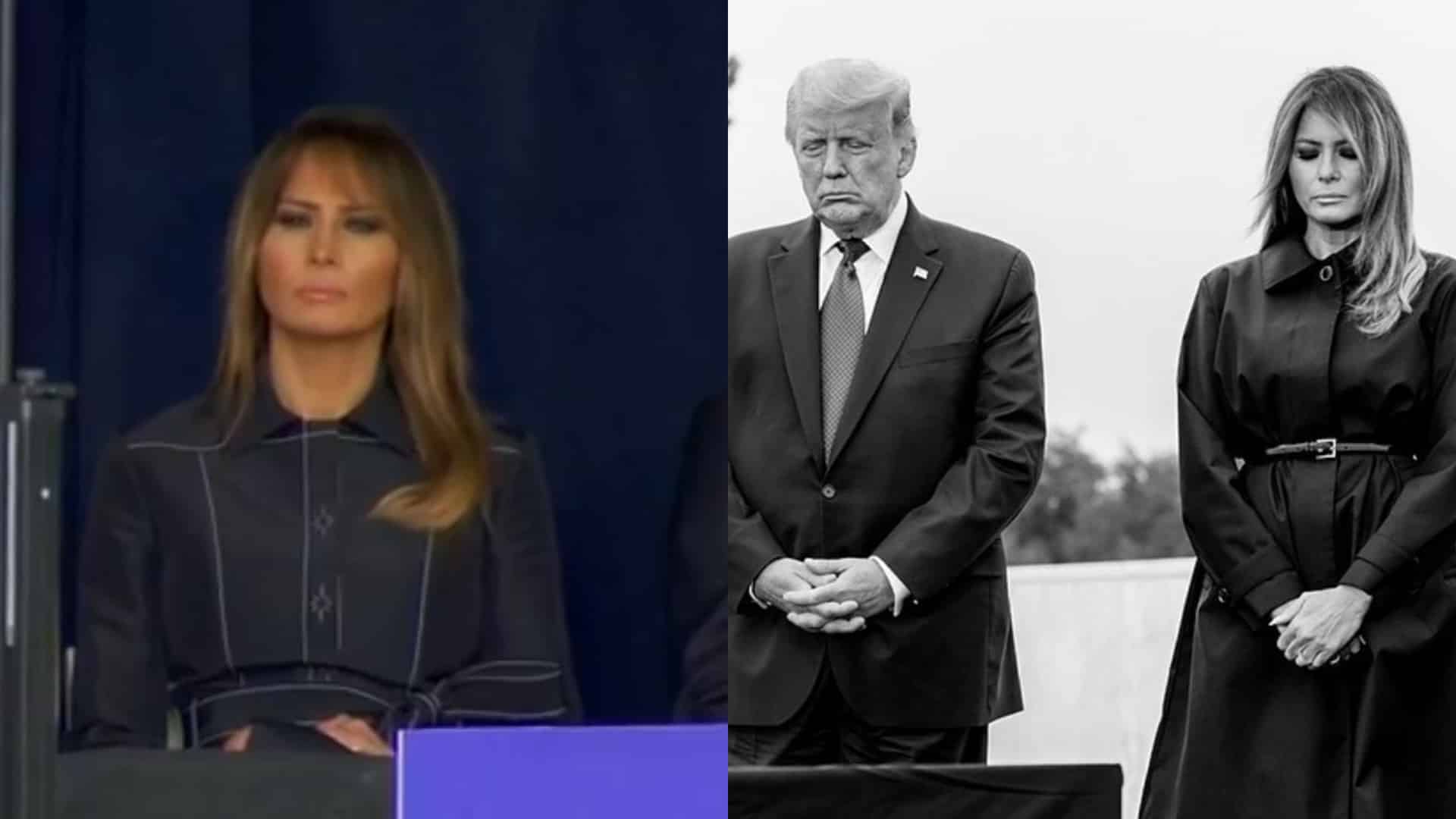 Melania Trump tweeted about ‘the truth’ coming out on September 10th and people on Twitter felt the tweet was a little ironic, to say the least. After all, the truth did come out and it wasn’t pretty.

Stephanie Grisham, Chief of Staff and Spokesperson for Melania Trump, tweeted out about people saying lies to get some money and time on television.

I continue to be shocked by the lengths that power hungry people will go to, in a pathetic attempt to be relevant. Spreading falsehoods in exchange for a few dollars & some TV time is never worth it.

Although Grisham did not mention specifics, many people speculate that it could be about the recent books that have come out discussing President Trump and the White House. President Trump has been caught lying a numerous amount of times. A fact that people on Twitter were quick to remind Grisham.  (You know…in case she forgot)

What falsehoods? He’s on tape saying it?

Wow. I never thought you would describe the Trump crime family as perfectly as you just did.

This commenter found a different way to phrase Grisham’s tweet.

A Response From The First Lady

Meanwhile, Melania Trump responded that the truth will come out.

The truth will prevail! https://t.co/kZeQAkpnC8

And Twitter certainly had something to say about that response.

This user questioned if Melania is the one that doesn’t know the truth.

Another giving FLOTUS a way she thinks will help the truth prevail.

Has Donald decided to submit his DNA to prove his innocence in one of his rape cases?

That would help the truth to prevail.

Has Maxwell released more information yet about you and Donald?

That would help the truth prevail. pic.twitter.com/nz4Mxd8s36

A 15-year-old replied his support for the First Lady.

Which quickly offended many people. This user found it particularly offensive.

Dont be ridiculous-what exactly has she done to be given that honor.

Co-Host of The View, Joy Behar, chimed in finding the Tweet to be rather funny.

The Pot Or The Kettle?

Yes, President Trump has been caught lying several times. There’s no secret there. Has he denied the lies well after evidence has proven otherwise? Also, yes. But his most recent lie cost us lives…THOUSANDS of lives.

So let’s talk about it.  Shall we?

Famed journalist, Bob Woodward, has released tape recordings of the President talking about the coronavirus. These recordings and information came out along with his new book titled, “Rage.”

Which pretty much sums up the feelings of so many Americans when they heard just what was said on the recordings. President Trump caught in another lie. Although people already knew about this lie, the suspicions have now been confirmed.

President Trump insisted that the virus would disappear. At least, that was what he told the public. But in an interview on March 19th, President Trump told Woodward, “To be honest with you, I wanted to always play it down. I still like playing it down because I don’t want to create a panic.”

Trevor Noah, the host of The Daily Show, tweeting his reaction.

FOX: IS PRESIDENT TRUMP TOO HANDSOME TO WIN THE NOBEL PEACE PRIZE?

Trump has known about the danger and severity of the coronavirus pandemic since the beginning of this year. We urged him to use his presidential authority to protect our country. He chose to lie, delay, and downplay the crisis.

Keith Boykin, a CNN commentator, shared a video from The Lincoln Project about the news findings.

Trump knew the coronavirus was deadly. He knew it was not a hoax. And he knew it was worse than the flu. But he lied to the American people so he could “play it down” and make himself look better.

Now he’s been caught on tape admitting his lies.pic.twitter.com/a7hR3COXYd

In his book, Bob Woodward states, “Trump never did seem willing to fully mobilize the federal government and continually to push problems off on the states. There was no real management theory of the case or how to organize a massive enterprise to deal with one of the most complex energies the United States had ever faced.”

This hashtag started trending on Twitter shortly after the recordings were released.

One user tweeted his confusion about the fear of panic President Trump claimed to have.

He was worried about PANIC? Is that why he discouraged mask wearing, distancing and had superspreader rallies that affected people? Nah…he just didn’t give a damn!!#TrumpKnew #TrumpLiedPeopleDied #VoteBlueToEndThisNightmare @TWR2020 @TWR2020media pic.twitter.com/5sLKgMj6po

A reference to Jaws was made by this Twitter user.

A tragic irony: the woman who said “You knew there was a shark out there and you let people go swimming” died from the coronavirus. #TrumpLiedPeopleDied pic.twitter.com/t9yifVoAcp

Remember when you were in school and had to say the pledge of allegiance every morning? I’ve said it so much I can probably say it backwards without hesitation.

Now I think it’s safe to say that the President of our country should know the Pledge of Allegiance of all people.

Well, apparently we had a little bit of trouble remembering it at the 9/11 commemoration in Shanksville, PA.

President Trump recites the Pledge of Allegiance at this morning’s 9/11 commemoration in Shanksville, PA. pic.twitter.com/KZPWjai9ye

People were quick to notice that Trump didn’t seem to know the words. Melania Trump was criticized as well for not saying anything at all.

These comments questioned if ‘recites’ was a good way to phrase that.

i see you are using “recites” in the loosest definition of the word.

Does not look as though he is “reciting” much of anything. Looks like he doesn’t know the words to this one…

A supporter came to his defense by explaining her husband doesn’t recite it.

Not everyone recites the Pledge of Allegiance or sings National Anthem out loud…give me a break-my husband doesn’t as an example but will remove his hat (if one is on) and crosses his heart.

The only way @FLOTUS could recite the Pledge of Allegiance is if Michelle Obama said it two weeks earlier.

At the end of the day, the irony in Melania Trump’s response was abundantly clear. Twitter certainly did not let Melania get away with tweeting that response without reminding her of the recent facts that have been made public. Many lies have been proven to be told

But it doesn’t stop there.

Ronna McDaniel, Chair of the Republican National Committee, also decided to tweet about the truth.

Joe Biden can’t run from his disastrous record responding to the coronavirus.

In the tweet, McDaniel referred to the accusations that Joe Biden responded poorly to COVID-19. Twitter was again quick to fire back at her response.

This person reminding McDaniel that the President was caught lying about the threat of the virus.

The president admitted that he lied about the coronavirus threat. For months.

While others mentioned Joe Biden isn’t the President.

Wait until she finds out who the actual president is.

He wasn’t the POTUS. He also didn’t have the information that Trump had on Feb 2. Nice try Ronda Romney.

Ronna made a typo. TRUMP can’t run from his disastrous record responding to covid-19, because TRUMP is the one currently in office, NOT Biden. Trump has the authority to do something about covid, but chooses not to. Biden has no authority as he holds no seat. So stop lying, Ronna

But this user agreed with Ronna McDaniel.

Its about time the media finally asks a question that means something other than how he feels.
Joe doesnt have a clue as to what he would have done to make a difference in a world wide pandemic. All he can say is POTUS didn’t handle it well.
He has no idea what to do

‘The truth’ seems to be a popular topic of conversation for both parties but there are some things that you cannot deny. And things Twitter certainly will not forget. I think it’s safe to say that Twitter’s lesson of the day for the First Lady and fellow republicans, would be those with glass houses should not throw stones.

The Abject Ridiculousness of the Left

Gottlieb: ‘White House Leadership Was Failed by Health Officials’ in the Early Days of the Pandemic

Iran chides US as world refuses to reimpose sanctions

Republicans Nervous Roe V. Wade Could Be Overturned, Eliminating Any Reason To Vote For Them

Democrats Lure Progressive Voters To Polls By Disguising Them As Riots

Isn’t It Obvious We Need a New System?