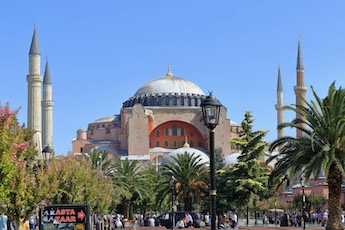 Legal Insurrection: Turkey’s President Recep Tayyip Erdogan has ordered the conversion of Istanbul’s Hagia Sophia into a mosque. The 1,500-year-old cathedral would open to Muslim worship later this month. The announcement was met with the cries of ‘Allahu akbar’ by a crowd gathered outside Hagia Sophia, media reports said on Friday.

The sixth century cathedral came into Islamic possession in 1453 when Ottoman Turks defeated the Christian Byzantine empire, also known as the Eastern Roman empire. It was finally turned into a museum in 1934 by Turkey’s founding father Mustafa Kemal Ataturk, as part of his efforts to secularize the Muslim-majority country.

The Friday’s presidential decree is seen as a major symbolic act in the overturning of Turkey’s secularist legacy. Turkey underwent a process of secularization in the early part of the twentieth century under Ataturk’s rule. Erdogan has embarked on a mission to Islamize to country since he took power seventeen years ago. more here

Should Taiwan Be Permitted To Become A Nuclear Weapons Power?

Should I wear a mask? Experts on how we stay safe as Australia eases coronavirus restrictions

THE TIME TO ACT IS NOW!! THIS IS GOING MAINSTREAM!!!

Regardless of where your state and community are in their own #COVID19 curves, there are steps that everyone should continue to take to practice good hygiene and prevent the spread of the virus. Learn more: https://www.whitehouse.gov/openingamerica/ pic.twitter.com/YDlxK6bLaG

Working from home: 'I'm a bit brainier than he thought I was'

Protester attacks NYPD officers, including chief of department, as they made arrest