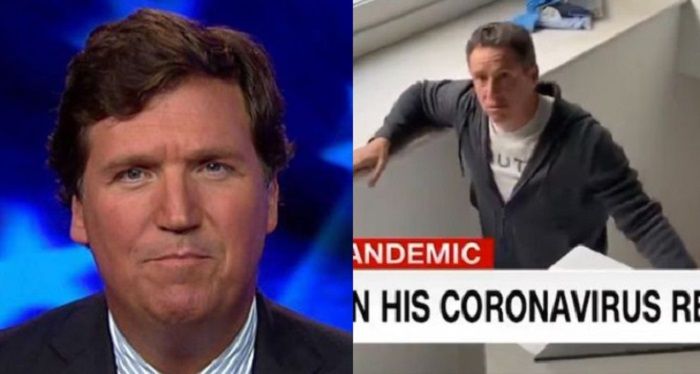 Fox News host Tucker Carlson absolutely leveled Chris Cuomo over a ‘fake’ stunt he and the network pulled showing him emerging from his basement quarantine.

Cuomo’s CNN show, Cuomo Prime Time, aired video of what they called “the very moment [Cuomo] emerged from his basement, where he’s been riding out coronavirus for the last several weeks.”

Cuomo himself narrated the event, claiming it was his “official reentry from the basement,” said he was sweaty from working out, and implied he had just been personally cleared for release by the CDC.

“CNN, shameless cheese balls that they are celebrated by filming Cuomo rising like a buff cable news Lazarus from the grave and back into ordinary life,” Carlson mocked.

Here’s the very moment @ChrisCuomo emerged from his basement, where he’s been riding out coronavirus for the last several weeks. pic.twitter.com/tugkXCGZD7

Cheesy or not, the entire segment was the very definition of ‘fake news.’

While the network wants viewers to believe Cuomo has been locked in his basement for ‘several weeks,’ the reality is the CNN host broke his quarantine last week when he traveled with his family to visit undeveloped property he owns in East Hampton.

He admitted this himself!

Video (1/2): @TuckerCarlson took an absolute blowtorch to Fredo @ChrisCuomo for having “risen from the dead” and having “seize[d] every chance to remind everyone watching that he was sick and in very strict containment” when, in fact, it was all LIES but Cuomo and CNN didn’t care pic.twitter.com/DBkSXgU7TJ

During a segment on his SiriusXM satellite show just over a week ago, Cuomo went on a stunning rant against his current gig on CNN.

He said his role as a CNN anchor is designed for “hyper-partisanship” and amounts to “trafficking in things that I think are ridiculous.”

But during that diatribe, Cuomo, who is the brother of New York Governor Andrew Cuomo, a man who has demanded residents in his state wear masks in public and ‘stay home, stay alive,’ admitted to being out in public.

The CNN host railed against a “loser biker” who confronted him on Easter Sunday for being outside his property with his family despite his coronavirus diagnosis.

“I don’t want some jackass, loser, fat tire biker being able to pull over and get in my space and talk bulls–t to me, I don’t want to hear it,” he fumed, lamenting that he’d like to have told the guy to “go to hell” and “shut [his] mouth.”

Video (2/2): @TuckerCarlson turns up the heat on Fredo @ChrisCuomo for acting like a “buff cable news Lazarus” when he’s instead filled with “narcissism.” With help from “shameless cheeseballs” at CNN, they created a scandal by demanding we stay locked in while he roams #Tucker pic.twitter.com/GLgE9hHa2n

Tucker proceeded to level Cuomo for the joke segment.

“When did journalists start talking about themselves so much? It’s not a story, it’s narcissism,” Carlson correctly pointed out.

“And that’s weird enough. But it’s not all. That was fake,” he continued. “Just last week Cuomo admitted getting into a fight with the bicyclist who harassed him for going outside and congregating with other people, something CNN has been vilifying ordinary people for wanting to do.”

It should be noted that Cuomo had to admit the altercation with the biker in question because that person filed a police report.

#Tucker showing @ChrisCuomo end his Coronavirus stay in quarantine. But he LIED to all of us. He broke quarantine last week. He got into a fight 30 minutes from his home with a biker. That biker filed a police report against him. @FoxNews

He [biker named David] said Cuomo then started toward him, coming to within about 40 feet.

“I said to him, ‘Your brother is the coronavirus czar, and you’re not even following his rules — unnecessary travel,’” the resident said.

Does anybody really think this was the only time Cuomo broke his quarantine? That he stayed locked in his basement the entire time with the exception of this visit to East Hampton?

And while Cuomo threatened him, Tucker invited the biker to come on his show.

“By the way, if you are the loser fat tire bicyclist, you are always welcome in the show,” Carlson said. “We’d love to hear from you. That whole exchange seems kind of unpleasant but there is a scandal underneath it.”

“Here you have a top CNN anchor who appears to have been ignoring the social distancing rules his network has been promoting and forcing on everyone else,” he added. “It seems like he wasn’t telling the truth about staying.”

What an absolute joke this network has become.

The Chinese Government Wasn’t Happy with This Reporter, so He Doubled Down [VIDEO]

Merkel says Germany will start reopening its economy on April 20

Gaza Factories Spring Back to Life Making PPE for Israel