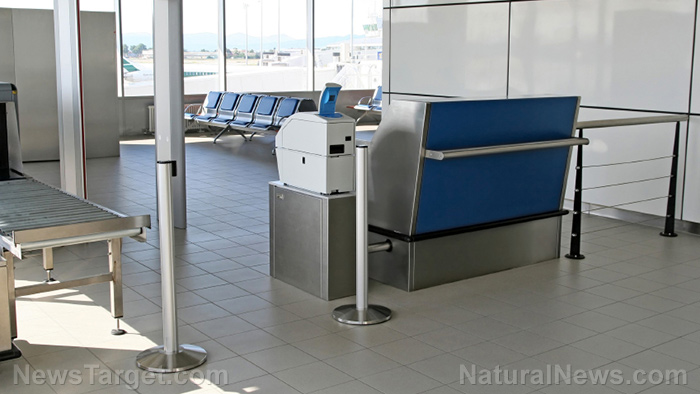 (Natural News) The Transportation Security Administration (TSA) announced that it would begin pilot testing of a new biometric identification and tracking scheme for domestic travelers at the Ronald Reagan Washington National Airport on Aug. 2.

Travelers who “volunteer” for the new scheme are instructed to insert their driver’s license or ID card into a magnetic stripe reader or place their passports on a scanner. Afterward, they are told to stand on a marked spot in front of a webcam and remove their mask for image capturing. The image captured by the webcam is then compared to the image on the ID or passport presented to see if they match.

In a press release, TSA stated that the new system was part of a “safer checkpoint experience” in light of the Wuhan coronavirus pandemic. The press release also mentioned that any pictures of travelers taken are not saved – they’re only used to verify if the traveler indeed owns the proof of identification presented.

The new “touch-less” system, however, still poses problems of its own. While TSA agents need not touch anything, travelers will still be touching the scanners for their ID or passport that other passengers have used before. This is on top of having to remove their face masks – just after touching these surfaces – before their photographs are taken, putting it back on afterward. Touching multiple items or surfaces and then touching the face raises the risk of COVID-19 infection as the coronavirus has been found to linger for some time on surfaces.

In addition, many local and state health departments have issued orders requiring all people to wear masks in public places – with some places penalizing those who refuse to do so. Massachusetts, for instance, imposes fines of up to $300 for not wearing a mask or face coverings in public. Removal of any mask or face covering for the TSA mug shot forces travelers to break a rule to comply to another, so to speak.

Moreover, while the notices at the new TSA touch-less stations indicate that travelers can decline to have their mug shot taken, they are still required to scan their ID or passport at the station – with no legal basis whatsoever.

The TSA has been called out numerous times for its outright disregard of passengers’ rights in the name of security – from touching passengers inappropriately, conducting unreasonable searches and seizures to targeting people critical of its policies at airport checkpoints, and the list goes on and on.

Aside from these violations, the agency has also been criticized for noncompliance with the federal Paperwork Reduction Act (PRA). Under the act, an agency that wishes to collect information from the public needs to establish procedures and undergo approval by the Office of Management and Budget before doing so.

A report by Papers, Please cited the practice of taking mug shots of travelers as an example of TSA blatantly disregarding federal laws.

The report explains that under the PRA, any regulation or notice ordering that information be collected from the public such as mandatory facial recognition should be approved first by the Office of Management and Budget (OMB). The office will then issue a control number to attest that the notice to collect is valid and approved.

Given that the TSA is unable to produce an OMB control number or otherwise prove that it got approval for its mandatory facial recognition rule, then it should not be able to force passengers to have their photographs taken. Furthermore, the PRA also states that without the OMB’s approval, domestic travelers are not subject to any penalties if they fail or refuse to comply with facial imaging procedures at TSA checkpoints.

The TSA did not indicate in the press release how long the pilot test would continue. Based on how it’s handled the rollout of previous procedures, however, the agency seems to implement new changes to its surveillance procedures in an incremental manner. Statements saying that the new rules are “just a test” or “voluntary” for a short time tend not to hold true with the practices continuing indefinitely, until such time that they become mandatory for travelers to pass through TSA checkpoints.

The same press release stated that travelers can participate in a survey via QR code about their “experience and satisfaction” with the new system. It would be better if the survey also asked users if they knew how unconstitutional the new system was, with its infringement of travelers’ fundamental rights.

Learn more about the TSA’s unconstitutional regulations and other violations in the name of security at Liberty.news.

Bill Gates turns on CDC and FDA, insists they can't be trusted with Trump in charge

THE REAL KEYS TO CONSISTENCY | BEING CONSISTENT IS A SCIENCE

An Extinction Event for America’s Restaurants

Russia’s ‘Hunter’ Is Unlike Anything in America’s Arsenal