Donald Trump attended a church service on Sunday at the International Church of Las Vegas. The US president was seen adding, what looked to be eight $20 bills, to the church collection plate.

The pastor said: “He gave the church back a voice.

“He’s given a voice to the unborn.”

He also thanked the president for attending the church for his third appearance. 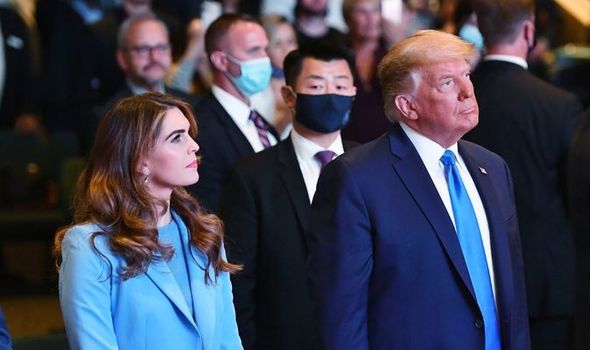 The pastor said: “This is your third time here. That means you’re really a church member.”

The president went to the indoor non-denominational Christian church service with his aides Hope Hicks, Kayleigh McEnany and Dan Scavino.

One social media user wrote: “Well well well. Look who Trump decided to go to some kind of church with today.

“Hope Hicks had COVID-19 as well so something is not right.”

Other users questioned why the president and his aides were not wearing face masks two weeks after Mr Trump was diagnosed with COVID-19. 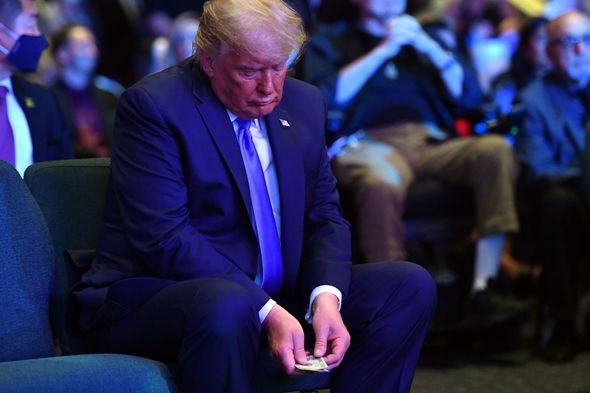 “If they are out amongst people without masks, they are deliberately spreading the virus.”

Only a few church goers were seen wearing masks at the indoor service.

Mr Trump’s former Press Secretary, Kayleigh McEnany, posted on Twitter that she attended the church event with the president.

It came just a few days after she said she was “blessed to be COVID clear” on Twitter.

President Trump and the First Lady both tested positive for the coronavirus at the start of October, just over a month before the US presidential election.

Mr Biden has reportedly been going to church since they reopened.

On Sunday, Mr Biden also visited the grave of his son Beau Biden, who died of cancer in 2015.

Mr Trump has reportedly not been to church services in person since late 2019.

List of officials who sought to ‘unmask’ Flynn released: Biden, Comey, Obama chief of staff among them

The cancel culture: the intolerance of the tolerance agenda

10 Clever Upgrades for Your Bug Out Bag

Diabolical ironclad beetles can get squished under 39,000 times their weight and survive. Scientists figured out how.

Sedated and abandoned: the struggle to care for my disabled daughter during lockdown

Weather: Temperature drops to 7.9°C in parts of UAE

Letting Go of Wrath and Anger

Covid-19: Auckland man who visited The Malt pub had been exposed to virus that day

WHO: Over half of Beirut’s health facilities are ‘non-functional’

Election 2020: How the world reacted to Jacinda Ardern's landslide victory