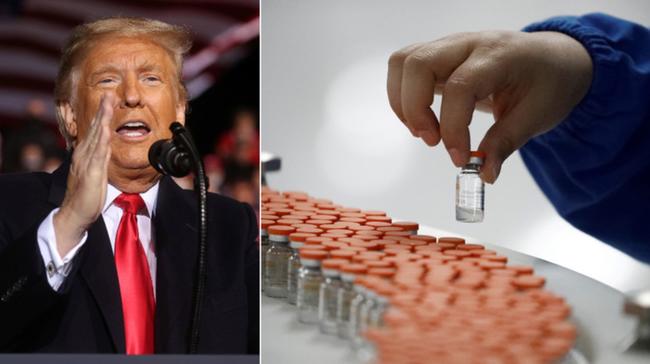 It’s not every day that President Trump outflanks his progressive critics on the issue of ‘consent’.

But according to some recent comments from the president, skeptics worried about the prospect of mandatory vaccination orders in the US and in the UK have rallied to voice their opposition.

But if President Trump is reelected, Americans who are concerned about what some ‘experts’ have characterized as a ‘rushed’ approval process for the COVID-19 vaccine won’t need to worry about being forced to accept the vaccine and vaccinate their children. Because President Trump says he will not issue a mandate requiring that individuals receive the coronavirus vaccine once one becomes widely available.

President Trump is making sure essential workers and all Americans will have access to a safe and effective coronavirus vaccine. pic.twitter.com/FSlnVDpGp8

While Trump claimed that “essential workers” and “older people” would take priority, the president made a brief detour detour during the interview with Fox’s Stuart Varney that he won’t require vaccinations because “some people feel very strongly” about the issue, Trump said.

Bill Gates, who insists that everyone – all 7+ billion humans on the planet – must be vaccinated to completely stamp out the virus and reduce its incidence to “zero”.

“I don’t believe I’d ever do a mandated vaccine,” the president told Fox’s Stuart Varney. “I just don’t think I would do that, where you have to have it, because there are some people who feel very strong about that whole situation,” Trump said.

Polls suggest roughly 50% of Americans would decline to take a COVID-19 vaccine, regardless of the developer, due to concerns about the approval process, which Bill Gates himself once denounced as potentially corrupt, blaming President Trump’s insistence on approving a vaccine before election day.

A Deadly Formula – Why Viking Weapons and Armor Were So Effective

Trump’s push to ban TikTok in the US, explained in 30 seconds

The 25 Best Films To Stream On HBO Max Right Now

Portland Rioters Hurl Chunks of Concrete at Police During Clashes

Number of managed isolation breaches from earlier this year revealed

Tired of being stuck at home? This website lets you peek out of windows around the world

Back in the Saddle

US Embassy in Turkey warns about terrorist threats, kidnappings of Americans…