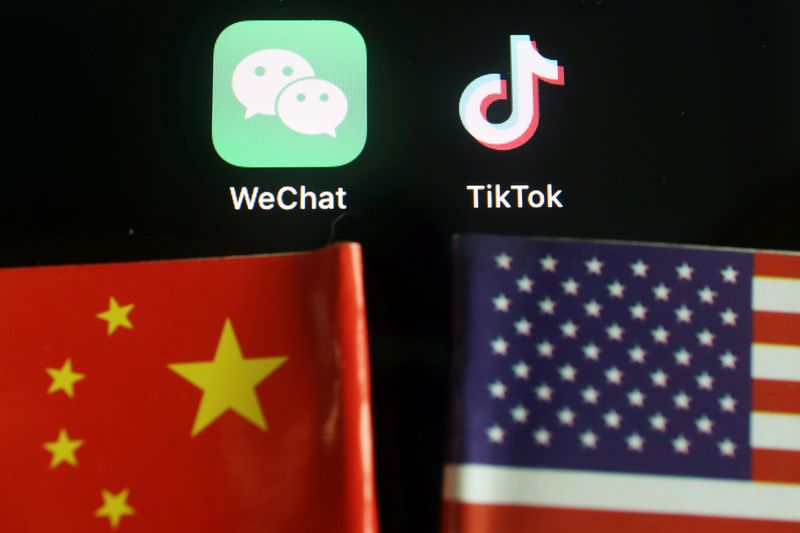 The messenger app WeChat and short-video app TikTok are seen near China and U.S. flags in this illustration picture taken August 7, 2020. REUTERS/Florence Lo/Illustration

By David Shepardson and Alexandra Alper

WASHINGTON (Reuters) – U.S. President Donald Trump has unveiled sweeping bans on U.S. transactions with the Chinese owners of messaging app WeChat and video-sharing app TikTok, escalating a high-stakes confrontation with Beijing over the future of the global tech industry.

China said on Friday the companies comply with U.S. laws and regulations and warned that the United States would have to “bear the consequences” of its action.

TikTok has come under fire from U.S. lawmakers over national security concerns surrounding data collection as distrust between Washington and Beijing grows. Reuters on Sunday reported that Trump has given Microsoft Corp <MSFT.O> 45 days to complete the purchase of TikTok’s U.S. operations.

“We are shocked by the recent Executive Order, which was issued without any due process,” TikTok said in a statement on Friday, adding that it would “pursue all remedies available to us in order to ensure that the rule of law is not discarded”.

The ban on U.S. transactions with Tencent, one of the world’s biggest internet companies, portends further fracturing of the global internet and severing of long-standing ties between the tech industries in the United States and China.

“This is the rupture in the digital world between the U.S. and China,” said James Lewis, a technology expert with Washington-based think-tank Center for Strategic and International Studies.

“We are reviewing the executive order to get a full understanding,” a Tencent spokesperson said.

WeChat has been downloaded a relatively small 19 million times in the United States, showed data from Sensor Tower. In China, however, the app is ubiquitous as a medium for services as varied as games and payment. It is also a common platform to communicate with individuals and businesses outside China.

U.S. social media and messaging services such Facebook Inc’s <FB.O> WhatsApp and Messenger are blocked in China, where a “great firewall” prevents citizens from freely accessing the worldwide web, and where online communication is routinely monitored and censored.

U.S. concerns about China’s tech industry had until recently focused on telecom equipment vendor Huawei Technologies Co Ltd [HWT.UL]. As relations soured over a host of economic and human rights issues, it has sanctioned numerous other Chinese tech firms.

Tencent is the biggest target yet. It is Asia’s second most-valuable company after Alibaba Group Holding Ltd <BABA.N> with a market capitalization of $686 billion, and is among the world’s largest social media and video game companies. It opened a California gaming studio this summer and owns minority stakes in numerous gaming and internet firms around the world, including U.S. messaging app operator Snap Inc <SNAP.N>.

Trump’s order sent Asian stock markets lower on Friday, with Tencent shares falling as far as 10.1% before recouping some of its losses in afternoon trade. [MKTS/GLOB]

The yuan <CNH=>, a barometer of Sino-U.S. relations, posted its steepest drop since the United States expelled China from its Houston consulate a little over two weeks ago. [CNY/]

Trump issued the orders under the International Emergency Economic Powers Act, a law that grants the administration sweeping power to bar U.S. firms or citizens from trading or conducting financial transactions with sanctioned parties.

Tension has been simmering between the two powers for months, with the United States taking issue with China’s handling of the novel coronavirus outbreak and moves to curb freedoms in Hong Kong. The increasingly aggressive posture towards China comes as Trump bids for re-election in November.

Trump said this week he would support Microsoft’s efforts to buy TikTok’s U.S. operations if the U.S. government got a “substantial portion” of the proceeds. He nevertheless said he will ban the popular app on Sept. 15, though some Republicans have raised concerns about potential political fallout.

The app may be used for disinformation campaigns that benefit the Chinese Communist Party, and the United States “must take aggressive action against the owners of TikTok to protect our national security,” Trump said in one order.

In the other, Trump said WeChat “automatically captures vast swaths of information from its users. This data collection threatens to allow the Chinese Communist Party access to Americans’ personal and proprietary information.”

The United States is not alone in its concern about Chinese internet apps: WeChat and TikTok were among 59 mostly Chinese apps that India outlawed in June for threatening its “sovereignty and integrity”.

The WeChat order would effectively ban the app in the United States by barring “to the extent permitted under applicable law, any transaction that is related to WeChat by any person, or with respect to any property, subject to the jurisdiction of the United States, with Tencent Holdings Ltd.”

It was not clear whether the sanction would effect Tencent’s other holdings in the country.

“Banning WeChat is against America’s liberal principles,” Jeason Ma, a 33-year-old in Los Angeles who obtained U.S. citizenship in November, told Reuters. “Most of our family and friends are in China. This will cause significant inconvenience to our lives.”

Ma has been sharing his account information for WhatsApp and messaging rival Line Corp <3938.T> with friends and family, fearing he could lose access to WeChat.

The order “calls TikTok a national security threat,” said Derek Scissors, an expert on Sino-U.S. economic relations at the American Enterprise Institute think-tank. “Either we’ve missed the threat for three years or it just became one and yet we are waiting 45 days.”

How Antifa and Black Lives Matter Compare with Satan

6 Takeaways from the First Night of the Democratic National Convention

4 mysterious objects spotted in deep space unlike anything ever seen…

When we end up under martial law, and if you keep it up we will, you’ve no one to blame but yourselves. Not God. Not your parents. Not the police. Not Trump. Not your fellow humans. I say this out of concern. https://t.co/MFQ4pX7OQx

Laacher See: The Caldera in the Middle of Europe Is Bubbling Intensively – Is the Volcano Awakening Again?