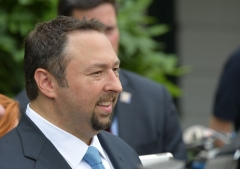 As to whether President Donald Trump is still downplaying the severity of the coronavirus, Miller said, “Not at all, but I think the president is accurately saying that Americans are starting to safely and responsibly reopen all around the country. People want to get back to work. They want to get back to school.

“They want life to return to normal, where we see football coming back, saw the NFL start on Thursday. We saw some college football yesterday and more pro football today. Americans want to get their lives back, and this is a key differential, George, between President Trump and Joe Biden. Joe Biden, I think, wants everyone to stay locked in their basement forever. President Trump wants to be safe, responsible, get us back open,” he said.

When asked what evidence he has that Biden wants people to stay locked in their basements, Miller said, “Well, very simply, when he was asked if he would shut down the economy in January, he said yes. He said: If the experts tell me to shut it down, then I will.

“He said if the scientists –” Stephanopolous interjected.

“What we need is to safely and responsibly move forward and developing this vaccine is absolutely critical, and I think it’s very dangerous that Biden and Kamala Harris are both trying to throw out these anti-vaxer type rhetoric, casting doubt over a vaccine when, look, all of the vaccine makers have come out and made it very, very clear, it’s going to be driven by the experts,” he said,

“It’s going to be approved by the experts. And that’s why we’re moving ahead with Operation Warp Speed that President Trump has put into action. Eight different vaccines that are currently in the works, we’re going to get America back to normal. We’re going to defeat this virus, George,” Miller added.

Stephanopolous said Biden said he would take a COVID-19 vaccine if the experts said it was safe, even if that cost him the election.

“Well, he needs to share that information with Kamala Harris who was very much throwing out some different rhetoric last week, and that’s why they’ve changed their tune, but the fact of the matter is that Americans know that President Trump, as a businessman, as someone who cuts through all the bureaucratic nonsense, is pushing this ahead,” Miller said.
“Think how remarkable this is for a moment, George, the fact that we’re going to have a vaccine the same year we’re getting hit by this global pandemic, this is unheard of, and if it was typically going back to kind of the bureaucrats or the swamp monsters and the status quo we’ve seen from Joe Biden, they’d be going super slowly,” he said.

“You remember back in the swine flu, the H1N1, that even Biden’s former Chief of Staff Ron Klain said that it was — that it was fortuitous, that they didn’t have an absolute pandemic, something even worse break out, said they did everything wrong. Americans don’t want someone like Joe Biden who did everything wrong the last time they had a chance. That’s not deserving of a promotion,” Miller added.

Stephanopolous cited polling that indicates the fallout from the Bob Woodward tapes are taking a toll on Trump. He said 65 percent of Americans, according to a new Ipsos poll, disapprove of how Trump handled COVID-19, 67 percent think he acted too slowly. Less than one out of three trust what Trump says about the pandemic, compared to 51 percent who trust Democratic presidential nominee Joe Biden.

Asked how Trump can turn around some of the harsh judgments about his handling of the pandemic, Miller said, “What you didn’t mention is that Americans very much trust President Trump to help us recover with the economy, and Americans also believe that President Trump is the one who is best positioned to lead us to a vaccine, something that President Trump, I believe, will deliver this calendar year and a return to normal in 2021.

“But, George, one other thing I got to point out that we didn’t hear from in the intro, there is a reason why Bernie Sanders and other Democrats are so concerned about Joe Biden and the lack of enthusiasm with his candidacy,” he said.

“Last night, I was with President Trump in Northern Nevada, and what we saw were thousands of enthusiastic people, and listen to this, George, over 20 percent of the people who were at that event didn’t even vote in 2016. That’s why our internal numbers show us actually winning Nevada, feel very well-positioned. It’s another blue state we’re going to flip this year,” Miller added.

Matthew McConaughey spreads message of unity amid coronavirus pandemic: This is not about politics

What Senate Republicans have said about election-year Supreme Court vacancies

North Korea's Kim Reappears In Public After Speculation About His Health

Open letter to Gov. Newsom: Let's work together with churches for common good

Coronavirus cases are now doubling in England every week as the 'R' rate reaches 1.7

Why the CARES Act Doesn’t Care About You

Western countries should learn to respect others’ sovereignty