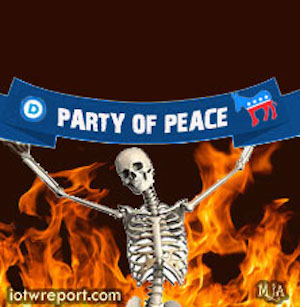 It was a perfect tactical move by the president.

Lifezette:
Like the guaranteed ritual of swallows returning to Capistrano, you can always count on certain Democrats to defend thugs, arsonists, and criminals even when those scum are burning down the cities those Democrats operate. You see, some Democrats hate this nation so much that any wanton violence against person or property is fine with them as long as it damages the country in any way.

What they don’t get, but President Trump does understand, is that a vast majority of the American people, regardless of color, are decent individuals who are disgusted by the antics of the thieves and looters afoot in many major cities in the U.S. President Trump, by calling these animals “thugs,” put himself on the side of that American majority (much like Richard Nixon did in 1968 in regards to violent New Left and hippie protests against American troops fighting in Vietnam) who recoil from rioting and looting no matter the supposed reason. By his accurate use of “thugs” Trump brilliantly baited the Democrats into coming to the visceral defense of said thugs. Well played, sir.

The president said this in a tweet on Friday, “These THUGS are dishonoring the memory of George Floyd, and I won’t let that happen. Just spoke to Governor Tim Walz and told him that the Military is with him all the way. Any difficulty and we will assume control but, when the looting starts, the shooting starts. Thank you!” A just and proper comment on the situation. more here

'Fourth of July isn't for people who look like me'

Virologists are LYING about the origins of coronavirus: Yes, the coronavirus contains gain-of-function gene sequences that were INSERTED into the virus

The 2020 Economic Crisis Is NOT A “Great Depression”

Hiring Liberals Was Policy: CDC Employees Made Over 8,000 Political Contributions to PACs Since 2015 — Only 5 Were to Republican Causes

Has US Dollar Lost Critical Support? What Next?

Happiness an Interview with Randy Alcorn