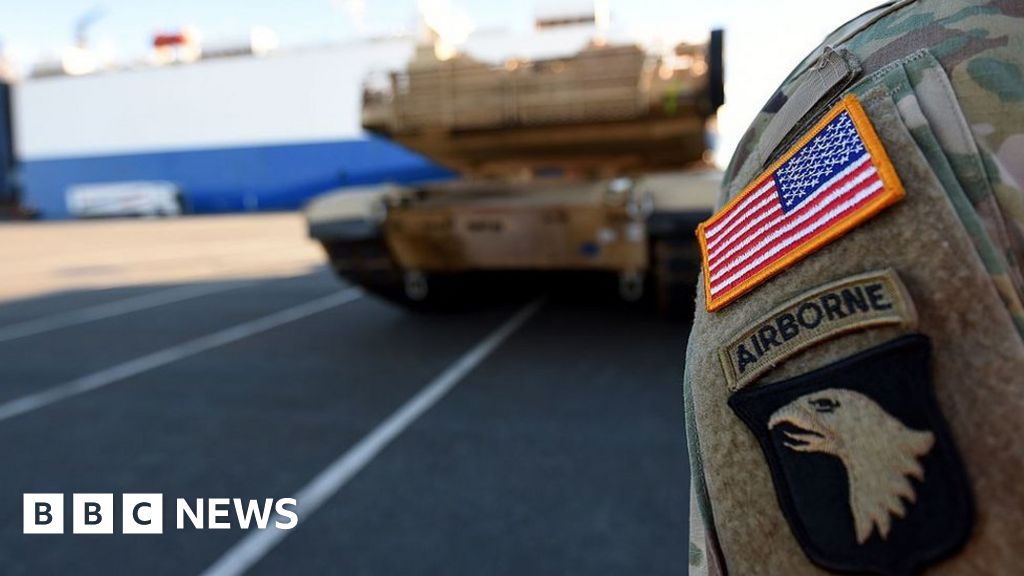 US President Donald Trump has approved a plan to withdraw 9,500 American troops from bases in Germany, the Pentagon says.

President Trump has previously accused Germany of not contributing enough to Nato.

A Pentagon spokesman did not give details on where the troops might be redeployed or when it would happen.

However, last week President Trump said some soldiers would be moved to Poland.

During a visit by his Polish counterpart, Andrzej Duda, Mr Trump said: “Some will be coming home and some will be going to other places. Poland would be one of those other places.”

Pentagon spokesman Jonathan Hoffman said it would brief Congress on the redeployment “in the coming weeks” and then consult Nato allies “on the way forward”.

The US move – which was first mooted in early June – has caused concern in Germany and among other Nato allies worried over possible Russian expansionism.

“The proposal that was approved not only meets the president’s directive, it will also enhance Russian deterrence, strengthen Nato, reassure allies, improve US strategic flexibility and US European Command’s operational flexibility, and take care of our service members and their families,” Mr Hoffman said.

Mr Trump has previously complained that the US is bearing too great a cost for Nato and that other members states should spend more. He singled out Germany for specific criticism.

The debate focuses around the target agreed by all alliance members that defence spending should reach 2% of GDP (gross domestic product, the total value of goods produced and services provided) by 2024.

“Germany is paying a very small fraction of what they’re supposed to be paying,” Mr Trump said during President Duda’s visit. “They should be paying 2% and they’re paying a little bit more than 1%, depending on how you calculate. But if you assume they’re paying 1%, that’s a tremendous delinquency.”

The US military presence in Germany is a legacy of the post-World War Two Allied occupation of the country. Germany currently hosts by far the largest number of US forces in Europe, followed by Italy, the UK and Spain.

The headquarters for the US European and Africa commands are both currently based in Germany.

A Note About the State of the World Right Now

The Social Contract Between Government And People Is Unraveling

Courthouse set on fire during protest in California

Amazing Debrief On The Republican Convention And More

Dr. Birx says November in-person voting should be as easy as going to Starbucks

What The “Opening Of America” Really Involves