At the start of 2012 Horseman Global did something which virtually none of its peers dared or would dare to do: it took its formerly 100% equity net long exposure to deep net short, launching an 8 year period in which the fund would be bearish month after month on stocks, yet as the monthly P&L table below shows, it also manged to generate impressive annual returns over this same period (with the exceptions of 2016 and 2019) despite constant central bank intervention pushing stocks relentlessly higher, largely thanks to the Fund’s significant bond long position. 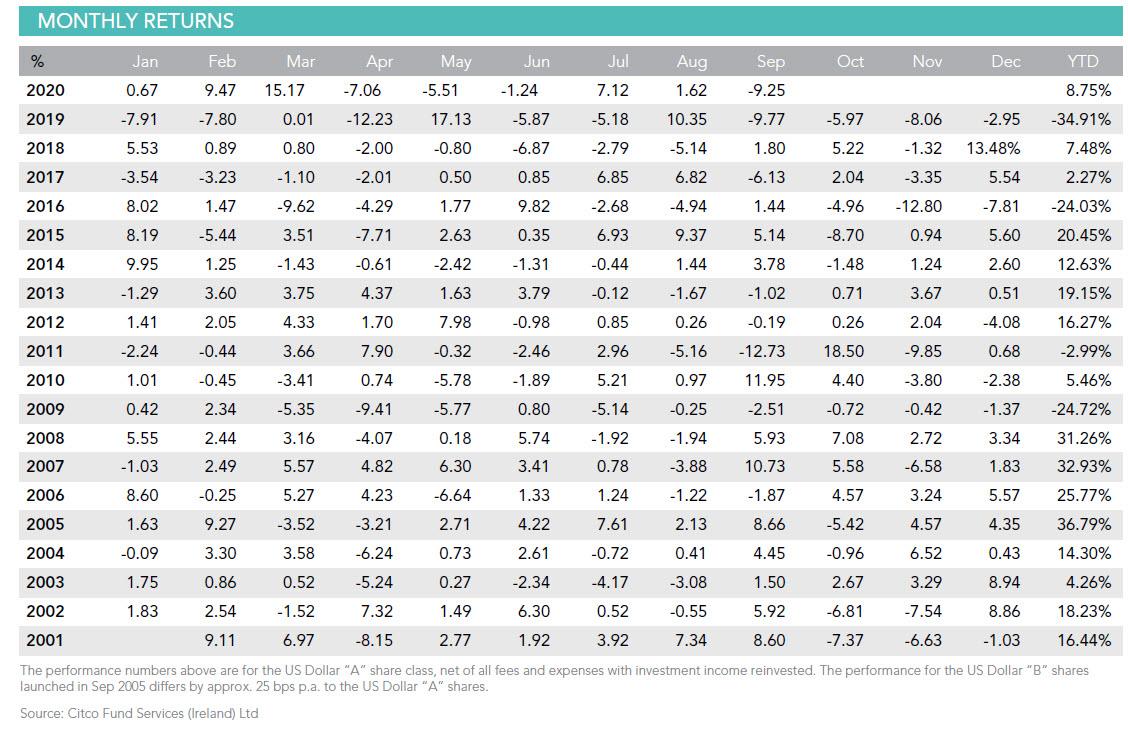 Yet after a dismal 2019, in which fund CIO Russell Clark finally met his match in Powell as it full-on fought the Fed and the Fed won, resulting in a 35% drop last year, things changed dramatically at Horseman, which has since rebranded itself as Russell Clark Investment Management.

First, as we reported back in April, the fund suddenly ditched its long-running bet on deflation, with Clark saying he used the opportunity offered by the Covid-19 crisis “to exit deflationary positions. We have sold all our government bonds, and I am now trying to short assets that have benefited from very low interest rates, wages and commodity prices, namely commercial property, restaurants and utilities (and potentially private equity).”

And yet, the fund was still net bearish on stocks, because as Clarke explained, “if inflation appears, then US markets are in big trouble. For me, the 1970s and stagflation beckons. Short bonds and long commodities look right, with a bias to shorting US equities. I see inflationary assets outperforming deflationary assets.”

Fast forward six months later, when things aren’t working out quite as expected because in a year that had seen wild swing in the fund’s P&L, September proved to be the worst month of 2020 for Clark, with the fund losing 9.25%, and cutting its return for the year by more than half to 8.75%. Worse, it also meant that the AUM for the Russell Clark Investment Management strategy had dropped to just $100 million, from $150MM at the start of the year.

… and was less than 20% of what it was at the start of 2019, which with a -34.9% return, would end up the worst year on record for Clark (in May of 2019, Bloomberg profiled Clark saying he is “betting it all on a market crash“, which did in fact materialize… unfortunately several months too late to help the hedge fund CIO).

But what we find most notable is that sometime in the past few months, Horseman, pardon Russell Clark, underwent a historic position and sentiment shift and after 8 years of being net short, the fund is now back on the bullish bandwagon with a 23.2% net long position (with no exposure to bonds).

Well, as is customary, Russell first gives a big picture view of what is going on in the hedge fund world, where it is hardly a secret, nothing works any more as central banks flipped the market on its head in their nuclear bomb response to the covid pandemic, and handed it to 16-year-old Robinhood daytraders on a silver platter. Needless to say, that made chasing momentum and consensus positioning critical, and crushed any contrarians who shied away from the herd. Sadly for Clark, he was among them, and the result has been a rollercoaster for both the fund, and Clark’s investment positioning, with the fund manager claiming that Covid-19 not only “allowed central banks to short circuit the natural de-leveraging process”, but also “literally turned the world upside down” making it extremely difficult for Clarke to “develop new ideas.”

Your fund lost 9.25% this month, from the long book and the currency book.

My big thing, for what it is worth, is finding something that no one else knows about and then building a fund around that. Ideas like Ireland was not going to default on its bonds, or iron ore prices were going to fall, shale oil drillers will never make any money or mall REITS are shorts. Simple ideas, which you can then build structures around, that both make money and fill an investment need for clients. For that reason, I have tended to shy away from consensus ideas and momentum, unless it explicitly fits in with that big idea.

In the last couple of years, the big idea was that clearinghouses were mispricing risk, market products that sold volatility would cause volatility to spike, and that this should result in a lot of financial bankruptcies and a significantly lower stock market. Covid-19 caused this to come to fore, but also allowed central banks to short circuit the natural de-leveraging process that would have occurred as a result. Usually I have a few ideas on the go, so that I can naturally move from one idea to another, but Covid-19 literally turned the world upside down, and so I have had to push myself harder than usual this year to develop new ideas.

So what is the one unifying idea behind Clark’s latest trades? As he says, “now the simple idea is that inflation is coming. All the inflation indicators that I look at; things like the Australian dollar, the Nikkei, Japanese Government Bond yields, the Transport index, Chinese Yuan and the CRB Raw Industrial Index, all say inflation but the loss in the fund this month says otherwise.”

In terms of specific trades, Clark had focused on the nat gas market whose rebalancing he thought was “signalling inflation.”

And certainly, there are signs of change there – but I can’t help noticing that it is Asian bond yields that are rising, not US bond yields, which is where you would think a rebalancing natural gas market would affect first.”

Perhaps there is a better place to bet on rising prices: Food.

Towards the end of the month, I revisited my presentations and noticed that Chinese pork prices have been very strong and are at 6 times that of the US. Can Chinese food prices really cause inflation in the rest of Asia? The answer is probably yes, but whether that will be bad inflation or good inflation is hard to tell. Naturally, high food prices are negative for consumption, but Asia has more farmers than anywhere else in the world, and high crop prices have tended to create consumption booms in places like India, Indonesia, and the rest of ASEAN. If China starts to increase imports of food from Asia, it could be very economically beneficial.

Still, as Asian bond yields have made it clear, “higher food price will cause bond yields to rise” according to Clark who adds that “food and food prices have been at the heart of every major Chinese revolution and crisis for the last 150 years. For that reason, I expect Chinese rates to stay high, and for the Chinese Yuan to keep appreciating.”

One key anchor to the fund’s new food inflation obsession comes from none other than Warren Buffett according to Clark, who explains as follows:

To answer one final question, how do I know that no one knows about food inflation? Well I just read a long article in The Economist, trying to understand why Warren Buffett bought the Japanese trading houses. The Economist had no idea of course. Japanese trading houses are the number one companies to benefit from food inflation in Asia. That is, I believe, why. If you don’t believe me, start googling about businesses that export pork, bananas or any other major food. We are moving to a portfolio that is long food, short bonds.

One small caveat: last week we wrote “Food Shortage Simulation Predicts 400% Increase In Food Prices By 2030“, so to say that “no one knows about food inflation” may be a bit of a stretch.

Finally, Clark’s latest dramatic portfolio reassessment means that “starting late September, and continuing in October”, Clark is “moving our commodity longs to food related names.” This is likely good news for the fund’s remaining LPs as it also means is that Clark “can focus the fund down to fewer names on both the long side and short side, as I now have a better idea of what is going on, which should reduce volatility going forward.”

Two final observations: while the fund is net long some of the most inflation-sensitive sectors such as financials, basic materials, industrials and energy, it remains short the covid-impacted industries such as restaurants and transports; and while we assume the tech short is just a bet on mean reversion, the substantial short in utilities is just another way for the fund to go short Treasuries.

Finally, in terms of geographic positioning, one can summarize Clark’s latest view simply as “long Asia, short the US.”

How to get a better night's sleep this winter

‘A miracle’: Doctors said actor had almost no chance of survival

Fauci: 'We had a superspreader event in the White House'

Why isn't Jenny Durkan being criminally charged for allowing left-wing terrorists to take over Seattle?

Starting A New Job Remotely? Here’s What You Need To Do

Lego, Barbie and Monopoly are being tipped to be among the top toys this Christmas

How to Lead a Glitteringly Creative Life

How Sunday blew up at the intersection of Trump, The Villages and Twitter