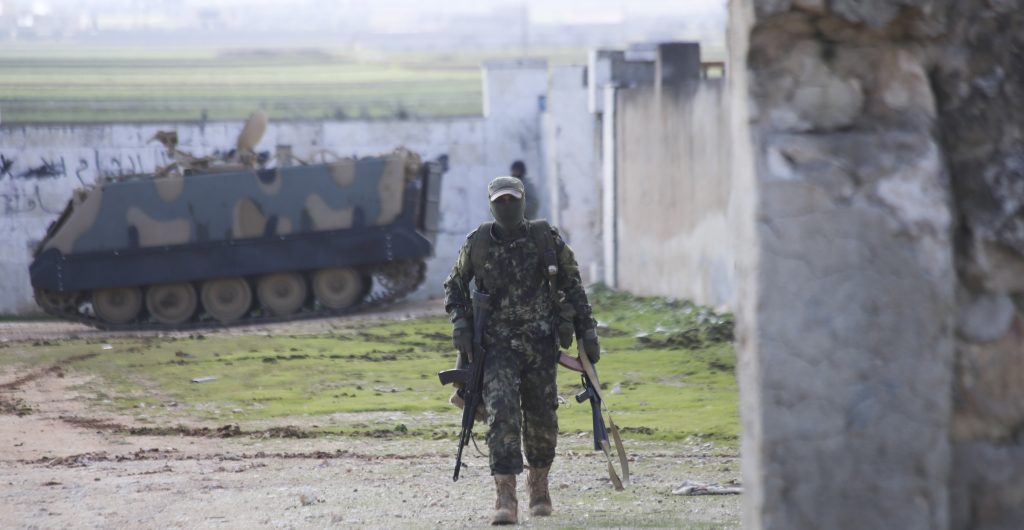 Crown Prince of Abu Dhabi Mohammed Bin Zayed offered money to the Syrian regime in a secret meeting between al-Assad and an Emirati senior diplomat to breach the ceasefire agreement that Syria, Russia and Turkey reached in early March. This is according to a report in the London-based Middle East Eye last week, which cited unnamed high-ranking sources familiar with Turkish diplomacy.

What Does Bin Zayed Want?

Bin Zayed, who opposed a truce in Syria altogether from the beginning, repeatedly attempted to break the ceasefire agreement by urging Assad to resume military action against Turkish troops and Turkish-backed forces in the northeastern part of Syria. This area is the last opposition stronghold where Turkey and Russia have been intervening militarily, and which Syria is trying to recover control of.

The sources that the Middle East Eye cited said that Bin Zayed offered the sum of $3 billion after the Syrian regime said it needed financial support and requested $5 billion.

“’He [Assad] said that Iran has stopped paying because they don’t have cash, and the Russians don’t pay anyway,’” one source was quoted as saying. Purportedly, by the end of March, Abu Dhabi had already advanced $1 billion.

Russia Intervenes to Prevent a Catastrophe

Turkey had been warning of major retaliation if the ceasefire was to be breached, and Russia, who monitors military movements in the northeastern area, soon became aware of Syria’s next move, sources went on. Moscow immediately sent its defense minister Sergey Shoygu to Damascus in an impromptu visit to prevent the catastrophe from happening.

Another Turkish senior diplomat, who remained nameless, was quoted by the same website as confirming the covert deal between Assad and Bin Zayed who had sent a high-ranking Emirati diplomat instead. Bin Zayed was also said to have reiterated his demands to break the ceasefire even after Shoygu’s intervention.

Though the United Arab Emirates backed the opposition when war broke in Syria following the 2011 events, Abu Dhabi’s ties with Damascus, who is closer in relations to Iran and Russia, have been shifting to being warmer in recent months, particularly as Assad’s forces recovered more national territory following the fall of ISIS.

A Scheme Stretching All the Way to Libya

The Emiratis’ offer to Syria came as no surprise to some critics, who see Abu Dhabi’s growing influence in the Middle East and North Africa as blatant and brazen. Most recently the UAE has exerted its will in Libya by backing the Libyan National Army (LNA) led by Khalifa Haftar even as Turkey is also having its fair share of leverage by opposing Emirati-backed forces and aiding the Tripoli-based Government of National Accord (GNA).

Abu Dhabi’s efforts to rekindle the Turkish-Syrian conflict in Syria was largely received not only as a scheme to mitigate Turkish forces and Turkey’s presence in northeast Syria by tying Ankara down to further fighting, but also as a diversion which would undermine Ankara’s defense of Tripoli as Haftar’s forces advance in their yearlong offensive to seize the capital.

Forces loyal to Haftar and the Libyan National Army, which controls most Libyan territory and is based in east Libya, have been conducting an unremitting offensive since April 2019 to unseat Fayez al-Sarraj, leader of the GNA and push his UN-recognized government out of Tripoli.

While Haftar rejoices in the support of the United Arab Emirates, Saudi Arabia, Egypt and France, among others, the Tripoli-based GNA almost wholly relies on Turkey, which provided significant military and logistic aid.

The United Arab Emirates’ interests in Syria and in Libya, however, only mirror the Turkish ones in both countries as well. After it led its third cross-border military intervention in Syria, Turkey started deploying its troops and drones in Libya, being given the opportunity to do so by the GNA who desperately needed Ankara’s help.

Much the same as Turkey shares borders with Syria — seeing it as a major regional matter not void of issues relating to its own stability — Ankara deems Libya necessary by sharing maritime borders with it. Moreover, both Libya and Syria proved to be the biggest refugee hotspots recently as war ravaged both countries, and Ankara often used the issue to exert pressure on the European Union.

Ankara also saw in Tripoli a relief of what it deems a maritime chokehold, as Turkey confronts its eastern and western neighbors in the Mediterranean Sea over energy reserves and exclusive economic zones.

One of the first deals Tripoli and Ankara reached occurred last November, after Turkey sided with the GNA. This was an agreement that redrew maritime boundaries in favor of Ankara, which provoked a rise in tensions with neighboring Cyprus and Greece, as regional actors race to acquire hydrocarbon reserves and control the distribution of energy pipelines.

Countries such as Greece, Cyprus and the U.A.E.-ally Egypt bridled at the agreement of Tripoli, which they said gave Turkey further control over maritime swaths that were already claimed by their legitimate countries.

Last year, Egypt, Israel, Jordan, Palestine, Cyprus and Italy formed the Eastern Mediterranean Forum, as most of the members wanted to build a pipeline to ship natural gas through Crete to Italy and mainland Greece. Turkey — which has long opposed such projects as it wants to take the upper hand on energy in Mediterranean — was left out.

Tripoli, however, says it needed the support of Turkey — as well as that of the United Nations — to tip the balance in Libya as it strives to establish democracy.

The Rise and Fall of the Islamic State in Afghanistan

Who is Winning the Sahel War?