“The only thing we have to fear is fear itself.” Those were the famous words of Franklin Delano Roosevelt, spoken at his first inauguration on March 4, 1933, at the height of the Great Depression.

Unemployment had hit 25 percent and there was panic in the land. Roosevelt was the epitome of calm and reassurance. He told the American people truthfully that they must not give in to “nameless, unreasoning, unjustified terror.” Roosevelt was speaking to a people demoralized and thoroughly spooked by a crushing depression and a loss of confidence in the institutions that had seemed unassailable only a short time before.

The rest, as they say, “is history.” Although difficult years lay ahead, Roosevelt proved to be exactly the president the American people needed, and he led them out of that very deep and dark place.

Those words ring loud and true today. A pandemic has laid low mighty nations—nations that have given in to fear and that may have massively overreacted to a new virus which, while both highly contagious and deadly, is not fundamentally different from any of the viruses that have run through human populations since antiquity. It is clear that people must throw off the fear that has resulted in both a severe economic catastrophe and the greatest loss of liberties the free world has ever witnessed.

Not every nation succumbed to panic. As I have been noting, Sweden is an example of a country that recognized early on that slowing down the virus made sense, but shutting down the economy, taking children out of school, and imposing draconian social distancing laws was the wrong way to go. Instead, minimum restrictions were imposed, and Swedes were advised about a suggested social distancing protocol.

Swedes were not stripped of their civil liberties, as in lockdown countries. Instead, people did their own risk assessment and decided how much risk they were personally prepared to take. The older and more vulnerable people tended to voluntarily adopt stricter social distancing regimens than did the young and healthy. That is almost certainly what we should have done in North America.

But we didn’t. Somehow, we panicked, and instead of “herd immunity,” we got “herd mentality.” We now find ourselves living in police states.

It is becoming increasingly clear that the Swedish system has worked. Like the lockdown countries, they experienced many nursing home deaths, but they have emerged from this crisis with their economy and their health-care and education systems intact.

Just as important, it is reasonable to assume that Sweden will have achieved “herd immunity” sooner than many of the countries that panicked and chose the lockdown model. Although it is still not clear that infected people will be completely immune to a second wave of the coronavirus, there is unanimous scientific consensus that those infected can expect a large degree of immunity for some time after their infection.

Eastern countries like Taiwan, South Korea, Japan, and Singapore all followed variations of the herd immunity model and have probably achieved a significant degree of immunity. In addition, they did not shut down their economies and will probably avoid the severe economic consequences shutdown entails. Those countries must have been channeling Rudyard Kipling’s advice to “keep your head while all about you are losing theirs.”

It should be remembered that Britain and Holland both originally planned to follow along with Sweden and keep their economies going. Then spiking numbers spooked them and they abandoned the Swedish herd immunity approach. As it turns out, they have suffered all the negative economic consequences Sweden has avoided, but their mortality figures are not essentially different from Sweden’s. 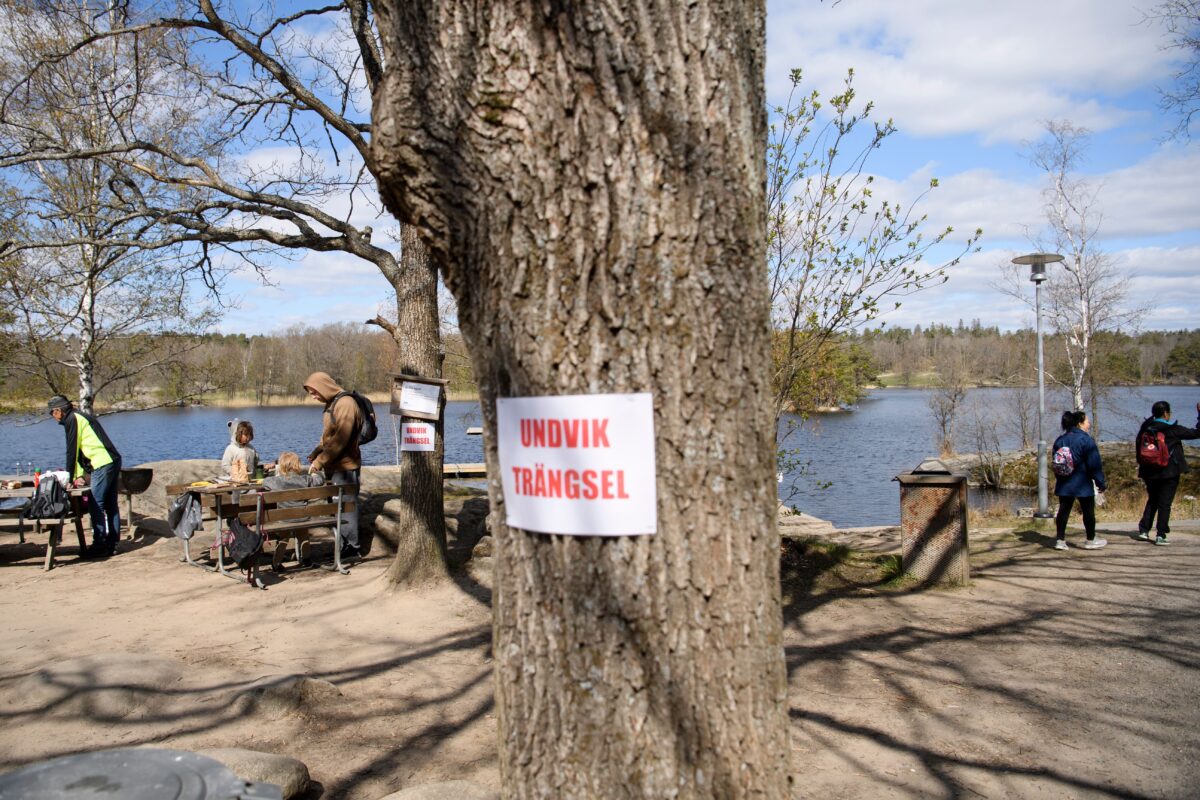 A sign on a tree reads “Avoid congestion” at the popular recreational area Hellasgarden in the outskirts of Stockholm, Sweden, on April 26, 2020, during the COVID-19 pandemic. (Henrik Montgomery/TT News Agency/AFP via Getty Images)

It is interesting to speculate on what might have happened if Britain and Holland had stuck to their guns and followed the Swedish model. Would that have given courage to leaders in countries like the United States and Canada to do the same?

We will never know now. In fact, as we emerge from this pandemic world, we had better get used to leaders claiming that it was their lockdown and civil liberty-crushing strategies that made the virus go away. The iconoclast Peter Hitchens tells this joke to illustrate the falseness of their argument:

And that is what every lockdown leader will inevitably claim. Except that if it turns out that Sweden and other non-lockdown countries did not suffer disproportionate deaths but kept their economies going and their children in school, we will see through the lockdown leaders’ false claims.

And if the half of the world’s population that couldn’t social distance and stop working even if it wanted to—the poor half—doesn’t suffer the huge death numbers that the doomsday modellers forecast, it will be proof positive that the nationwide lockdown model was the wrong model to follow.

The people who don’t have the luxury to social distance and stop working are the people who live in crowded shanties and must venture out each day to earn enough to survive the day. Most of those people live in places like the favelas of Rio or the slums of Lagos or Mumbai. But Europe and North America have many poor people as well. Social distancing and loafing at home are simply impossible for them.

Most American and Canadian politicians continue to hang on to their “stay at home” message even after the “curve” has clearly been flattened. They offer some strange promise that the virus will simply go away if we “hunker in our bunkers” long enough. This is very bad advice. Any competent epidemiologist will tell you that a virus must roll through a population before herd immunity can be achieved. With time, that virus will mutate and become less virulent. Our leaders should be clear with us about that. With a few exceptions, it is not happening. The message is to “stay at home” even in areas with low numbers.

The first Canadian leader to break with this policy of giving vague, misleading advice and instead officially adopt the Swedish herd immunity model is François Legault, premier of the province of Quebec. That province was one of the hardest-hit areas of Canada. People over 60 accounted for 97 percent of its deaths, and most of those deaths occurred in nursing and long-term care homes.

Legault wants to gradually reopen schools and businesses using herd immunity as the model. He is the first Canadian leader to be honest with his constituents and tell them that the virus will only cease to be a problem after it has rolled through the entire population. He assures people that most of those who do become infected will not die. In fact, many will experience either minor symptoms, or no symptoms at all. But he also tells people candidly that simply suppressing the virus by social distancing will just prolong the life of the virus in the community.

Other lockdown leaders are not being so candid. Some even seem to be enjoying their status as virtual commanders of populations all but denuded of their civil rights. They have strayed from their initial “flatten the curve” goal and appear to be offering some false promise that if the population simply stays in their homes, the virus will somehow magically disappear. As noted, there is no scientist or epidemiologist who would support such a wild theory.

Protecting Both the Vulnerable and Individual Choice

I suggest that eventually all lockdown leaders must follow the Swedish immunity model. The elderly and vulnerable must be offered protection, but civil liberties must be restored to citizens. People can make their own decisions about how much risk they are prepared to take.

Now that we know the risk of death for healthy people under 65 is not any higher than it would be in a bad flu year, this decision becomes easier. Older people with health complications, as well as younger people who are obese, diabetic, hypertensive, or smokers or have other health complications, might choose to strictly social distance, while those at least risk can choose to accept more risk and live more of a normal life.

There is a type of fairness in this choice. That is, the more risks the young and healthy are prepared to take, the sooner herd immunity will be achieved, hence the sooner the vulnerable can venture out into the community and be unafraid of a virus that has now run its course.

The point is that this should be the choice of the individual and not the state. And even as we regularly hear talk of “protecting the elderly and vulnerable,” those should also be personal choices. Older people faced with a choice of strict isolation until (if) a vaccine is found sometime in the future might well decide to take their chances on catching what could be for them a deadly virus rather than living out the last part of their lives in cold isolation.

‘Fear Does Not Stop Death. It Stops Life’

The latest solid information available from the state of California is that 96 percent of the people who get sick from this virus will recover. Most Californians won’t even be infected. The overall death rate for Californians is at most 3 in 1,000, similar to a bad flu. It might turn out to be less.

Books will be written in the future about the insanity of quarantining and stripping rights from entire populations of healthy people while depriving them of their livelihoods for what is looking more and more like a bad flu year. Perhaps “The Panicdemic of 2020” will be a future book title.

This novel coronavirus caught us all by surprise. Everyone was thoroughly frightened. But some nations reacted better than others. The nationwide lockdown model was a panicked response. The Swedish pragmatic approach was a reasoned response. This will not be the last pandemic. We should learn from Sweden and the other countries that kept their wits about them.

Author Vi Keeland said: “Fear does not stop death. It stops life.” We should remember those words when the next virus pays a visit.

Brian Giesbrecht is a retired judge and a senior fellow with the Frontier Centre for Public Policy.

Exposed: Lies, Corruption, & Pay To Keep The Public In a Fear-Induced Panic For Ultimate Control

It's Not Fake News: Trump Did Actually Suggest That Injecting Bleach Could Be a Cure for COVID-19

Senate Democrats Demand Coronavirus Aid Be Given To DACA Students

VIDEO: Woman Brutalized and Hauled Out of Michigan Capitol by Security for Protesting Quarantine