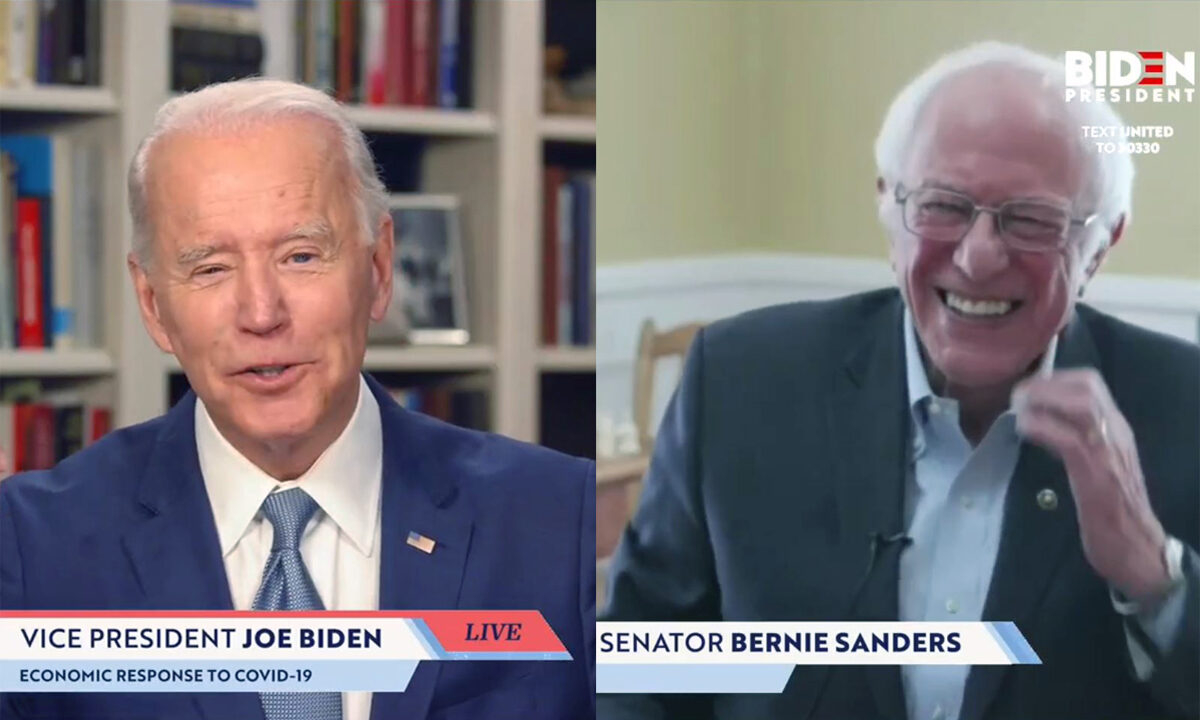 The man you have supported for five years, who built his reputation on fighting the Establishment, who told the Fat Cats that he could not be bought, who understood better than anyone the corruptions among big and small politicians … this last, best hope for a fair society has given it up and come out for a quintessential D.C. insider.

It was hard to watch. There was Biden welcoming our leader to his campaign livestream, calling him “my friend” and “a leader who shares those values” that the former vice president espouses.

This isn’t what you wanted. Oh, Sen. Sanders talked about helping the candidate create task forces to improve education, reduce incarceration, and stop climate change. And yes, he asked Biden if he would raise the minimum wage to $15 an hour (Biden agreed). He insisted, too, that in the present crisis we protect workers and monitor big business to ensure that the COVID-19 bills don’t benefit the rich and neglect the poor. Free college came up, too, and loan forgiveness.

VP Biden gave all the right assurances. He even brought up income inequality and “structural racism” before Sen. Sanders did. It sounded so promising and unifying and forward-looking. You can imagine liberal Democrats across the country nodding and smiling, a lingering tension in the party healed and now directed at unseating the great enemy in the White House.

But you don’t believe one word of it. This uplifting rap session you’ve seen before, when politicians huddle together and tell ordinary Americans how much they care and how hard they’ll work to relieve suffering once they win office. It’s been happening since you can remember. Words, words, words.

Sen. Sanders can talk all he wants, and he sounds the same as ever, but he’s not a candidate any longer. The hard progressivism of the man from Vermont who sought to find sister cities in the Soviet Union is in the hands of the man from D.C. who, with his wife, made $15.6 million in 2017–18 and whose son made a killing in banking and investment.

It’s ridiculous. No, it’s sickening. Your leader sits down and buddies up with a guy who is better connected with lobbyists and the Swamp than anyone who challenged him in the primaries. He makes Donald Trump look like a hick from the provinces. Biden’s pledge to favor the American worker makes you snort with contempt. Where was he in the Bush II and Obama years when globalization and mass immigration lowered wages for industrial workers? What did he say about NAFTA in the ‘90s and the closing of factories in the Midwest? This is the guy you wanna endorse?

You look across the aisle at the Republicans, see how they had their shake-up in 2016, and you were certain it was your turn in 2020. It was time for someone different, radically different, an adversarial character as disruptive to Establishment liberals as Trump was to Establishment conservatives.

Some of you were young enough to support Sen. Obama in 2008, believing him to be the salvation of progressive politics. But he proved just as close to Goldman Sachs as Bill Clinton was. With Tim Geithner of the New York Federal Reserve Bank serving as Obama’s Secretary of the Treasury, you were ready to abandon the White House for Zuccatti Park in Fall 2011—and you remember Sen. Sanders’ support back then.

That’s the Bernie Sanders you love, the enemy of Wall Street. The Sen. Sanders of class warfare—that is, the war Big Banks and Fortune 500s wage every day against workers—he’s the one who inspires you.

Yes, Sen. Sanders has discovered identity politics in recent years (like every other aged Democrat, including VP Biden), and in his livestream he rehearsed the culpable -isms of President Trump (racism etc.). But you have known for a long time that sexual and racial grievances are all too easily used as diversions from the core issue of income inequality. When Corporate America and the super-rich universities that train the people who work there become the loudest advocates of those kinds of identity diversity, you know it’s a sideshow.

You can see the senator’s fresh move into the Biden camp, then, only as a tragedy. How could Sen. Sanders not realize that this is to play the very political game he has despised forever. He hates Trump, fine, and so do you, but you also know that the predatory tactics of the ruling class long preceded 2016 and they will continue long after President Trump departs. And we know, too, that Biden won’t do anything about them. If he did pose a genuine threat to the system, you say to yourself, would he have pulled endorsements from every end of the Party?

So, what should Sen. Sanders have done?

He should have given up on the political system, pulled out of the Party, and inaugurated a new campaign, not a run for office but a mobilization of the tired and poor and disaffected ones, especially the young. Rallies, townhall meetings, YouTube clips, tweets every hour, TV and radio spots … in sum, a culture war against both parties, against Wall Street and Harvard, too, and Koch Industries, and Fox News.

That’s what you wanted. You don’t care about the triumph of the Democratic Party, and you don’t see President Trump as the root problem. He’s a symptom, and Joe Biden is not the cure. A Bernie wave through the airwaves and in the public square is now but a dream of what might have been, a counter-political movement that would energize the hungry and idealistic young left.

It might have made Sen. Sanders go down in history. Instead, he has sunk into nothing, a zero. And you don’t even know what to do with your dismay.

Mark Bauerlein is a professor of English at Emory college. His work has been featured in The Wall Street Journal, The Weekly Standard, The Washington Post, TLS and Chronicle of Higher Education.

Coronavirus US live: Trump says Michigan governor should 'make a deal' with protesters

Trump Will Try to Delay Election, Says Biden – But Why?