Authored by Ryan McMaken via The Mises Institute,

It’s becoming increasingly clear to even mainstream media outlets that things are unlikely to return to “normal” after the 2020 election. 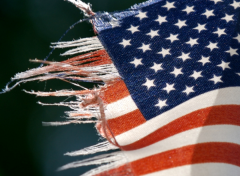 No matter who wins, it is likely the losing side will regard the winning side as having obtained its win using dirty tricks, foreign meddling, or through relentless propaganda offered up by a heavily biased and one-sided news media.

And if about half the country regards the winning president as illegitimate, where does one go from there?

The survey data isn’t exactly calming on this issue. As reported by Politico last week, the percentage of Americans who believe it is justified to use violence to “advance political goals” has quadrupled since 2017, for both Republicans and Democrats.

After all, political invective has reached a fever pitch since Hillary Clinton declared that a sizable portion of the United States population constituted a “basket of deplorables.” Perhaps not since the 1870s and 1880s—when Catholics, Southerners, and Irish (all core constituents of the Democratic Party) were denounced by Republicans as spies, traitors, and drunks—has half the country so despised the other half. As early as 2017, when asked of the chances of another civil war in the United States,  about one-third of foreign policy scholars polled said it was likely.

Perhaps, then, it is not shocking that we are now seeing articles even in mainstream publications suggesting that maybe, just maybe, the United States can’t continue in its present form. Moreover, the view is now increasingly being promoted by writers and ideologues outside the usual conservative and libertarian groups that have long advocated in favor of decentralization and local control.

On September 18, for example, Steve Chapman in the Chicago Tribune asked: “Can the United States survive this election?” For the past century, the answer given by most any mainstream journalist would have been a decisive yes. The usual narrative has long been this: “Of course America will endure for centuries to come! We Americans are masters of compromise. We’ll all soon realize we are all in this together and come together in unity!”

The concept of splitting off is as American as the Fourth of July. The high point of separation sentiment came after Abraham Lincoln’s election in 1860, resulting in the Civil War. But New England states contemplated leaving over the War of 1812….The bonds that hold Americans together have frayed, and what happens on Nov. 3 may do additional damage. No nation lasts forever, and ours won’t be the first. This election won’t be the end of the United States. But it could be the beginning of the end.

Moreover, Chapman notes that while many no doubt will continue to see the United States as strong and likely to endure indefinitely, such assumptions may be unwise given the reality of experience elsewhere:

In 1970, the Russian dissident Andrei Amalrik wrote a book titled, “Will the Soviet Union Survive Until 1984?” At the time, the idea of a giant superpower disintegrating sounded like a fantasy. But it eventually came true. … Countries like Czechoslovakia and Yugoslavia also have broken apart. Britain is leaving the European Union, and Scotland could push to leave Britain. It would be folly to think the United States is immune to these forces.

Chapman is not alone.

Last month in the Philadelphia Inquirer Chuck Bonfig suspected that maybe the end is near:

The country has gone through many periods of strife in my time here: assassinations, recessions, desegregation, inflation, gas crisis, Watergate, hanging chads, the AIDS crisis, 9/11. Maybe it’s the 24-hour news cycle or the immediacy of social media that makes the landscape seem so bleak, but I don’t recall us ever being so divided.

No one in our country seems happy today. The right is angry. The left is despondent. Our nation reminds me of those married couples who try to stay together for “the children” but end up making everyone around them miserable.

Maybe it’s time for a breakup….Just think about it, America. I know breaking up is hard to do. We used to be good together. But what is the point of having the “greatest country in the world” if none of us actually like it?

The debate over separation and secession has been additionally pushed into the national debate by Richard Kreitner and his book Break It Up: Secession, Division, and the Secret History of America’s Imperfect Union. Kreitner, who writes for the leftist magazine The Nation, suggests that the United States has never been as unified as many suggest and also concludes that secession and division may be a necessary tactic in bringing about the left-wing reforms he’d like to see. In an interview with The Nation, Kreitner discussed how he began to think about secession as a serious solution:

What if the United States broke apart? Would that be such a bad thing? Is it possible that the progressive policies and programs that I wanted to see put into place might be easier to enact in a smaller entity than the United States, with its 330 million people and the need to always convince people with very different attitudes and interests? So with that question, I was curious if anybody else in American history had favored secession for noble or progressive reasons—not to perpetuate slavery but even to oppose it.

The answer, I quickly found, is yes: There were disunion abolitionists who were fiercely against slavery and who wanted the northern states to secede from the union in the 1840s and 1850s as a way not only to protest slavery but to undermine it. Taking in their arguments and their rhetoric was really, really interesting.

Kreitner goes on to note that secession has long been at the forefront of American political ideology. This, of course, goes back to the secession of the American Revolution and can also be found in the secession movement favored by abolitionists and in New England’s efforts to secede during the War of 1812.

Secession has long been entertained by many Americans, and not just defenders of the old Confederacy. In the early days of Southern secession, many Americans—including those who didn’t like the South or slavery—were fine with the Confederacy’s departure. New Yorker George Templeton Strong, for instance, declared in 1861, “the self-amputated members [the Southern states] were diseased beyond immediate cure, and their virus will infect our system no longer.” That same year, other New Yorkers seriously discussed leaving the Union and becoming a city-state devoted to free trade. In 1876, the battle over who won the presidential election very nearly produced a national split, with the pro-Democrat governor of New York “promising state resistance” to the Republican usurpers.

Nor were the nation’s founders necessarily opposed to division. Thomas Jefferson expressed prosecessionist views, even when he was a sitting president. In an 1803 letter to John Breckinridge, Jefferson explained that if the future states of the Louisiana Territory sought to secede that was fine with him:

[If] it should become the great interest of those nations to separate from this, if their happiness should depend on it so strongly as to induce them to go through that convulsion, why should the Atlantic states dread it? But especially why should we, their present inhabitants, take a side in such a question?

And in 1804, Jefferson wrote to Joseph Priestly stating:

Whether we remain in one confederacy, or form into Atlantic and Mississippi confederacies, I believe it not very important to the happiness of either part.

Only Decentralization Can Save the Union

At this point, there is only one strategy that can prevent a continued slide toward conflict, disunion, and (possibly) violence: decentralization of political power.

Thanks to decades of growing centralization of power in Washington, DC, American policy is increasingly made by the national government and not by state and local authorities. This means American life is more and more governed by one-size-fits-all policies hatched by faraway politicians in DC. Thus, with each passing election, the stakes become higher as gun policy, healthcare, poverty relief, abortion, the drug war, education, and much more will be decided by the party that wins in DC, and not in the state capitol or in the city council. In other words, the laws that govern Arizona will be primarily made by politicians and judges from other places entirely. These faraway politicians will be more concerned with the needs and ideology of a national party, rather than with the specific needs of people who live in Arizona.

It is only natural that as the national government becomes supercharged in this way many Americans might start considering ways to get beyond the central government’s reach.

It doesn’t have to be this way. The United States could follow another path in which domestic policy is created and enforced in a decentralized manner, in which laws for Texans are made in Texas and laws for Californians are made in California. This, of course, is what Thomas Jefferson imagined when he wrote that the states should be self-governing and unified only on matters of foreign policy:

The true theory of our constitution is surely the wisest and best, that the states are independent as to everything within themselves, and united as to everything respecting foreign nations. Let the general government be reduced to foreign concerns only.

In a decentralized political scheme such as this, the stakes in a national election are much lower. It doesn’t matter as much for Ohioans which party is in power in Washington when relatively few laws affecting Ohioans are made at the federal level.

To adopt this way of doing things, however, would require a sizable departure from the current ideology that reigns in Washington. On the left especially, it seems few can imagine a world where people in Iowa or Indiana are allowed to run their own schools and healthcare systems without meddling from Washington. While conservatives’ efforts to force marijuana prohibition on states like Colorado show that the Right is not immune from this impulse, it is abundantly clear that the Left is quite enthusiastic about the idea of sending federal enforcers to ensure the states enact abortion on demand, adopt Obamacare, and enforce drug prohibitions as dictated by Washington.

But unless Americans have a change of heart and begin to decentralize the political system, expect a growing unwillingness to accept the outcomes of national elections and growing resistance to the federal government in general. What follows is unlikely to be pleasant.

Coronavirus: Guards are BACK on Irish border to monitor lockdowns

Is the Deep State Attempting a Hybrid War in Mexico?

EU warning: Brussels in 'catch 22 position' as states to question point of membership

Furious MEP explodes at Michel Barnier in Brexit fisheries row: 'Do not abandon us!'

Chrissy Teigen taken to the hospital

Mr. Vice-President, I am speaking