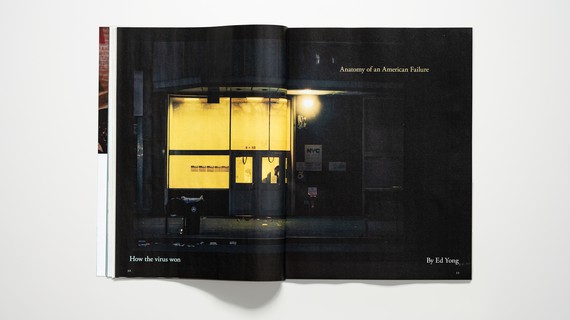 Anatomy of an American Failure

In September, Ed Yong reported on how the virus won.

Yong’s report hits all of the crucial points with the exception of the president’s self-centered, myopic focus on his reelection, which hampered America’s response from day one. Also, our American culture of rugged individualism—with its related thinking of “me and mine” and “survival of the fittest” as opposed to “we and ours” and “survival of us all together”—has contributed to the United States’ world leadership in cases and fatalities.

I was riveted by Ed Yong’s excellent and informative piece, until he veered off course to single out the president for ill-preparedness. I am not a Trump supporter—far from it—but I am compelled to see the coronavirus as presenting the sort of novel and calamitous crisis this nation hasn’t faced since Pearl Harbor. It will be easy for historians and analysts to look back one day at 2020 with 20/20 hindsight, spotlighting the failings and mistakes of our leaders, all of which likely made the situation worse than it would have been. Yet there is little reason to think governors, mayors, county executives, public-health officials, etc., did not have access to the warnings of health organizations and medical and scientific experts long before this silent and invisible enemy reached our shores. No state, city, or municipality seems to have taken steps to prepare for what health experts had been predicting for a long time. It was all about reaction, and for that we are all to blame.

Mr. Yong criticizes the World Health Organization unnecessarily harshly. As a retired physician, I followed news reports closely. From the beginning, the WHO said the novel coronavirus was dangerous and recommended that countries prepare. The WHO could not declare that the virus had reached pandemic proportions until that term’s definition was met; perhaps that definition should be reexamined. It’s not the WHO’s role to play guessing games. Realistically, with the modern level of international travel, any new, highly contagious virus is likely to reach many countries before it’s even recognized as a threat.

My article was primarily about America’s broken systems and long-standing failures, which allowed the coronavirus to run wild. In discussing Donald Trump, I explicitly said that he “isn’t solely responsible for America’s fiasco, but he is central to it.” Subsequent reporting showing that he deliberately downplayed the risk of the virus only substantiates this analysis.

In September, Clint Smith wrote about how a visit to the abolitionist’s birthplace helped him understand this moment in America.

Clint Smith’s article reveals the enduring hypocrisy behind current efforts to preserve statues of Confederate soldiers. He notes that only in 2011 was a statue commemorating Frederick Douglass erected in front of the Talbot County Courthouse, in Maryland, not far from where Douglass was born. It was placed near a statue dedicated to the Talbot Boys, 84 local Confederate soldiers. That statue was erected in 1916, half a century after the end of the Civil War, during the Jim Crow period.

Local citizens attempted unsuccessfully in 2015 to have the Confederate statue removed. Smith notes that when he visited, the issue was pending once again before the Talbot county council. Unfortunately, the council majority once again rejected this effort to remove the statue, arguing that the coronavirus had prevented wider citizen input. It is truly ironic that these public officials would use the pandemic as an excuse for inaction, given that COVID-19 has harmed African Americans and other minorities disproportionately.

While we cannot reverse our nation’s ugly racial history, we all have an obligation to correct harmful myths so that our nation can honestly discuss how to rectify its past.

Since the publication of my essay, Marylanders have reached out to me to share their own stories of growing up in the shadow of the Talbot Boys statue. Some wrote about how, prior to a few months ago, they had never considered what the statue, and others like it, meant. Others said that they have long seen it as a stain on the state they call home. The Talbot Boys statue is the last Confederate memorial on public property (outside of cemeteries and battlefields) in the state of Maryland, and many residents felt certain that after the killing of George Floyd and the nationwide protests that followed, it would finally come down. When I wrote the essay, a resolution had been brought before the county council to remove the statue, but as James G. Cibulka notes, the council ultimately voted 3–2 to keep the statue in place, despite overwhelming calls from local residents for it to be taken down. Outside the council meeting after the vote, roughly 100 people protested the decision and vowed not to give up the fight; the protests have continued.

As I have written before, the Confederacy was a traitorous army that fought a war predicated on maintaining the institution of human bondage. Statues and memorials honoring Confederates on public property should be removed. Some questions of history and memory require nuance and even compromise, but whether Confederate statues should remain lifted up on pedestals in public spaces is not, to my mind, one of them. According to the historian Kevin M. Levin, more than 75 Confederate monuments and memorials across the country have been taken down since protests began this summer. If the residents of Talbot County and the Marylanders who have written to me have their say, it is not a matter of if the Talbot Boys statue will come down, but when.

What we learned fact-checking this issue

In “The Election That Could Break America,” staff writer Barton Gellman describes the worst-case scenario for the November election: that Donald Trump could exploit the uncertainty of a close vote and use his power to prevent a decisive outcome against him. “Trump may win or lose, but he will never concede,” Gellman writes.

It wouldn’t be the first time an American election has ended in ambiguity. One example, from 1947, is known as the “Three Governors Controversy.” After running a viciously racist campaign and winning Georgia’s governorship, Eugene Talmadge died just weeks before his inauguration. Three other politicians then stepped in to claim the office: Herman Talmadge, Eugene’s son; M. E. Thompson, the lieutenant governor–elect; and Ellis Arnall, the outgoing governor, who declined to leave the position.

Knowing that the sickly Eugene might die before taking office, Herman Talmadge and his father’s allies had secretly encouraged write-in votes for the candidate’s son. He amassed only a few hundred, but he became governor based on an obscure part of the state’s constitution that granted decision-making power to the legislature in the event that no candidate received a majority of votes. At one point he shared the position with Arnall, who worked in an office 20 feet away. Talmadge had new locks installed, and Arnall eventually gave up the governorship.

But Talmadge’s time in office was short—fewer than 70 days. The Georgia Supreme Court ultimately ruled that Thompson was the legitimate successor.

In the opening paragraph of Barton Gellman’s cover story, an image emerges: a blinking red light. It’s an apt metaphor for the essay, which offers a stark warning about all that could go wrong in this year’s election and its aftermath. Our cover art, by Elias Klingén, took the form of an emergency light, signaling the hazards to our democracy that lie ahead, and the dire importance of voting.

Doug Casey: “This is Going to be One for the Record Books”

US orders China to close consulate in Houston

Failing to quarantine infected patients is to blame for second Covid-19 wave, warns the WHO

Live: Weaving a 2-bln-yuan business out of poverty alleviation workshop走村直播看脱贫

What is China Doing in Xinjiang?

My investigation of COVID-19 by Jon Rappoport

Lockdown Finally Ended My Relationship With My Gaslighting Boyfriend

Does Trump’s move on TikTok stands up from a legal standpoint?

There Will Be A Lot More Rioting, Looting And Civil Unrest As The U.S. Economy Continues To Crumble