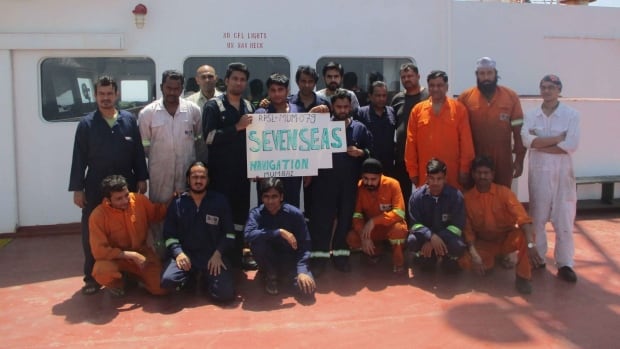 An oil tanker sought by the United States over allegedly trying to circumvent sanctions on Iran was hijacked on July 5 off the coast of the United Arab Emirates, a seafarers organization said Wednesday.

Satellite photos showed the vessel in Iranian waters on Tuesday and two of its sailors remained in Tehran.

It wasn’t immediately clear what happened aboard the MT Gulf Sky, though its reported hijacking comes after months of tensions between Iran and the U.S.

David Hammond, the CEO of the British-based group Human Rights at Sea, said he took a witness statement from the captain of the MT Gulf Sky confirming the ship had been hijacked.

Hammond said that 26 of the Indian sailors on board had made it back to India, while two remained in Tehran, without elaborating.

“We are delighted to hear that the crew are safe and well, which has been our fundamental concern from the outset,” Hammond told The Associated Press.

Hammond also said that he had no other details on the vessel. TankerTrackers.com, a website tracking the oil trade at sea, said it saw the vessel in satellite photos on Tuesday in Iranian waters off Hormuz Island.

The Emirati government, the U.S. Embassy in Abu Dhabi and the U.S. Navy’s Bahrain-based 5th Fleet did not immediately respond to requests for comment.

In May, the U.S. Justice Department filed criminal charges against two Iranians, accusing them of trying to launder some $12 million to purchase the tanker, then named the MT Nautica. The vessel then took on Iranian oil from Kharg Island to sell abroad, the U.S. government said.

Court documents allege the scheme involved the Quds Force of Iran’s paramilitary Revolutionary Guard, which is its elite expeditionary unit.

“Because a U.S. bank froze the funds related to the sale of the vessel, the seller never received payment,” the Justice Department said. “As a result, the seller instituted a civil action in the U.A.E. to recover the vessel.”

That civil action was believed to still be pending, raising questions of how the tanker sailed away from the Emirates.

Meanwhile, the 28 Indian sailors on board the vessel found themselves stuck on board without pay for months, according to the International Labour Organization. It filed a report saying the vessel and its sailors had been abandoned by its owners since March off the Emirati city of Khorfakkan.

The Arctic is on fire: Siberian heat wave alarms scientists

In the middle of the blame game initiated by the U.S., will the EU take sides or remain neutral?

Welfare & Marxism: A Deliberate Attack On Man’s Will

A family suspected of being Antifa protesters was trapped on a road near their campsite, police say