In Budapest, Hungary’s far-right prime minister, Viktor Orbán, says he is “rooting for another victory for Donald Trump”. In Rio de Janeiro, Jair Bolsonaro has been pictured in a Trump 2020 campaign hat.

Rightwing nationalist politicians around the globe are abandoning the usual diplomatic etiquette of hedging bets before foreign elections and instead are throwing their support firmly behind Trump in November’s US vote in the hope that he can confound the pollsters for a second time and win another four years in power.

While surveys suggest that a comfortable majority of the global population disapproves of Trump, insurgent far-right movements are wary of a return to geopolitics as usual if he leaves the White House.

“We are very familiar with the foreign policy of US Democratic administrations, built as it is on moral imperialism,” Orbán, who has positioned himself as Europe’s leading proponent of “illiberal democracy”, wrote in a recent essay. “We have tasted it – albeit under duress. We didn’t like it and we don’t want a second helping.”

Last week Trump’s challenger, Joe Biden, said “all the thugs in the world” were drawing inspiration from Trump, name-checking the governments in Hungary and Poland and drawing a furious response from Hungarian officials.

For Orbán and other nationalist leaders, there may be concrete policy benefits in a second Trump term, but the biggest draw would be the immeasurable psychological benefit of having a politician like Trump occupying the world’s most important office. If Biden wins, it may be taken as a sign that the populist moment is over.

“It would be seen as a major failure of populist nationalism as a governing ideology, particularly at a time when societies are looking for competent leaders who can steer their countries through the Covid crisis,” said Erin Kristin Jenne, a professor of international relations at Central European University.

During his divisive 2016 campaign and throughout his time in office, Trump has offered a blueprint and a psychological boost for rightwing nationalists.

Ágoston Mráz, who runs the pro-government Nézőpont Institute in Budapest, said Orbán and his Fidesz party had watched Trump carefully over the last few years, for example adopting and adapting his “America First” rhetoric. Orbán, who has been in office for more than a decade, now frequently speaks about “Hungary first” policies.

“Trump is the trendsetter and what Trump managed in the US, even a party like Fidesz can learn from. It is observed what kind of tools Trump uses, and through polls in Hungary it is checked if it works here,” he said.

Of particular note is Trump’s popularisation of the phrase “fake news” and his rants against the media. In Orbán’s government frequently accuses critical outlets of peddling fake news, and its coronavirus measures have included potential jail time for journalists spreading misinformation about the pandemic.

The “fake news” phrase has also been used by authorities to justify regulations and prosecutions in South Korea, Thailand, Saudi Arabia, Bahrain and Brazil. Egypt’s government passed a law in 2018 criminalising the spread of “false news”, and has used it to charge at least 19 journalists as well as bloggers and even people who post videos online decrying problems such as sexual harassment. In the Philippines, Rodrigo Duterte has railed against “fake news” outlets and introduced steep fines for news that damages “the interest or the credit of the state”.

A recent European poll found that no more than 20% of respondents in each of seven countries surveyed wanted Trump to win. However, among some central European governments and many far-right parties on the fringes of politics elsewhere, there is admiration for Trump. 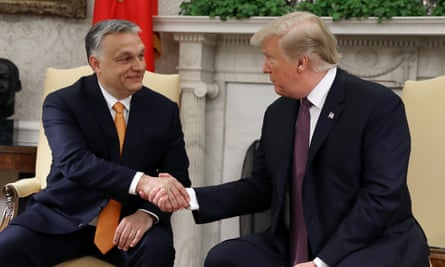 Viktor Orbán and Donald Trump at the White House in May 2019. Photograph: Mark Wilson/Getty Images

Aside from Orbán, the US president’s biggest European supporters are in Warsaw, where the ruling Law and Justice (PiS) party has pursued an agenda based on so-called “family values” that has involved a sustained anti-LGBT campaign. In June Andrzej Duda, a PiS ally, travelled to Washington for an endorsement from Trump just days before a tightly contested presidential vote that he eventually won. Duda has not yet repaid the compliment, though in August the PiS MEP Dominik Tarczyński compared Trump to John Paul II, the Polish pope, and wrote on Twitter: “Polish people will support you on November 3rd.”

Other admirers in Europe include Janez Janša, the populist prime minister of Slovenia, who takes a Trump-like approach to the media and his political opponents. After the Trump-Biden TV debate last month, Janša wrote that Trump had “won big”, and he has frequently praised the US president’s policies and speeches.

Some western European far-right parties, such as Spain’s Vox and the increasingly popular Brothers of Italy, have also spoken of Trump and his strategy as a direct inspiration. “It’s an inspiration in various ways: it’s about using patriotism to confront globalism,” said Iván Espinosa de los Monteros, Vox’s parliamentary spokesman and deputy secretary for international affairs.

“It’s also about defying political correctness – which has never been successfully challenged – and the ideas promoted by a very globalist left, which has imposed a series of mantras and ideas that everyone accepted and treats as absolute truths. But he has challenged that and he’s challenged it very successfully.”

A Trump loss, he added, would be bad news “not for Spain or for Vox but for the traditional western values that have made the west the best place to live in history”.

Before the US elections in 2016, Matteo Salvini, the leader of Italy’s far-right League, travelled to the US and posed for a photo with Trump in Philadelphia. Trump later denied they ever met, but that hasn’t diminished Salvini’s admiration. Last week he declared his endorsement by wearing a “Trump 2020” face mask during a protest outside a tax office in Rome. He said that when it came to the economy, despite the coronavirus pandemic wrecking havoc, Trump was “number one”.

Giorgia Meloni, the leader of Brothers of Italy and a former deputy prime minister, travelled to the US in February to hear Trump speak, and afterwards said: “This is the recipe we want to bring to Italy, where we too want to defend our products, our companies, our borders and our families.”

Perhaps Trump’s biggest fan among world leaders is Bolsonaro, who basks in his portrayal as the “tropical Trump”. The Brazilian leader touts a supposedly unbreakable bond with the US president, taking ministers to celebrate US Independence Day at the ambassador’s residence in Brasília and repeatedly posting photos of the pair on social media even as Trump’s re-election hopes fade. His politician son Eduardo has called for Trump to be given the Nobel peace prize and often shares Trump’s election propaganda on Twitter.

Observers say Bolsonaro seeks inspiration and domestic legitimacy from his North American counterpart. Bolsonarista officials trumpet Trump’s approval as proof that their rightwing revolution is on the right track and part of a broader global conservative and Christian movement being led by Washington.

Jair Bolsonaro having dinner with Trump at the Mar-a-Lago resort in Palm Beach, Florida, in March this year. Photograph: Tom Brenner/Reuters

Unlike Bolsonaro, Duterte has not consciously positioned himself as a Trump-like figure, but the two share the same ideological outlook and sometimes vulgar rhetoric. The Philippine president said this year that Trump deserved to be re-elected, and leaked phone call records show Trump praised his counterpart for doing an “unbelievable job” in his fight against illegal drugs – a campaign that some groups estimate has led to tens of thousands of extrajudicial killings.

This White House sanctioning of controversial policies is one reason that even populists who may not align ideologically with Trump see benefits to the disruption caused by his presence in the White House. Analysts say Turkey’s Recep Tayyip Erdoğan is rushing through various policies – such as a domestic crackdown and the acquisition of Russian S-400 missiles – in the anticipation that a Biden administration may take a tougher line.

In Mexico, the left-leaning populist president, Andrés Manuel López Obrador, known as Amlo, has forged an unlikely bond with Trump, who launched his first presidential campaign by badmouthing Mexicans. Amlo even travelled to Washington as election season heated up to celebrate a new trade deal and thank Trump for treating Mexico with “respect”. Trump, in turn, has repeatedly lauded Amlo a “great guy” – a point of pride for the Mexican president’s supporters.

“A president as unorthodox as Trump allows Amlo to get away with things that a more normal American president wouldn’t let him get away with,” said Carlos Bravo Regidor, a political analyst in Mexico City.

For leaders in Hungary and Poland, who are frequently reprimanded by EU politicians for democratic backsliding, having the White House as an ally provides a powerful counterbalance to criticism from Brussels, particularly in domestic messaging.

“If Trump is on my side then nobody can call me a leader that is excluded from the foreign policy community,” said Péter Krekó, who runs the Political Capital thinktank in Budapest, explaining Orbán’s thinking.

If Trump is no longer there, that equation changes. Under Biden, what Orbán called “moral imperialism” and what Democrats would call a values-based foreign policy may make a return. During the course of the campaign, Biden has accused Bolsonaro’s Brazil of tearing down its rainforests, and has lashed out at the Polish government’s anti-LGBT policies.

Critics of rightwing politicians cosying up to the US president say they are setting their countries up for an even rougher ride under a Biden administration. As the political commentator Eliane Cantanhêde warned in the conservative Estado de São Paulo this week: “Without Trump, Brazil could become an international zombie.”

Tensions at Italian Migrant Centre Under Quarantine Erupt into Violence

Trump Slams Fauci: His Pitching Arm Is ‘Far More Accurate’ Than His Predictions