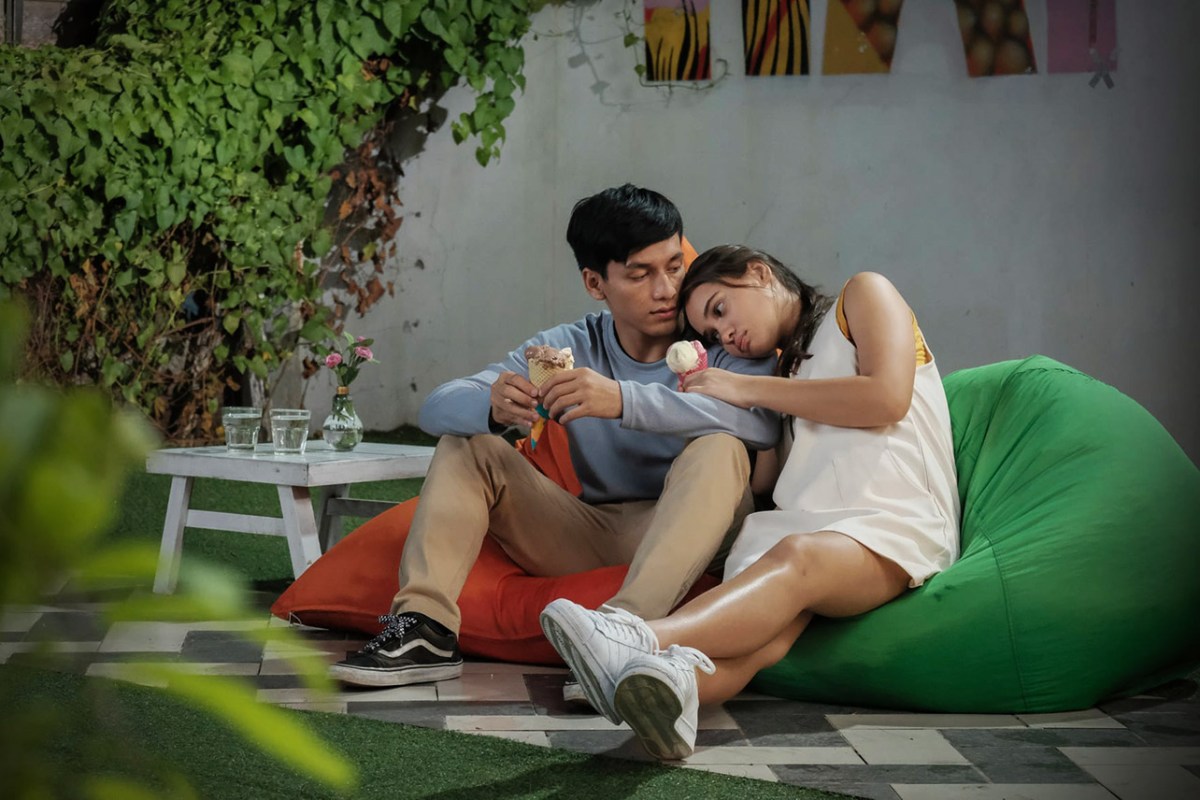 Love Like the Falling Rain, adapted for Netflix from a novel by Indonesian author Boy Candra, introduces us to young collegians Kevin and Nara, friends and neighbors since childhood, who must confront the shifting landscape of relationships, romance, and their feelings for one another as they navigate their way toward adult life. This tale has of course been told many times before, and with wildly varying thresholds for language and lasciviousness. The tone Love Like the Falling Rain takes, however, is one of careful melodrama, as polite a film as its leads are toward one another.

The Gist: Vin and Nara eat lots of ice cream, wink and call each other “Ugly” from their neighboring bedroom windows, and are pretty much inseparable around campus, where Nara studies traditional Indonesian dance and Vin is a budding environmentalist. Nara, love’s eternal optimist, always cries on Vin’s shoulder when a relationship goes south; her buddy, meanwhile, soulful and introspective, tells us in voiceover that he’s head over heels for Nara, but just can’t find the guts to tell her that she’s the one. We also meet Juned, a hothead fresh from a bad breakup, who seeks the thrills of motorbike riding and rock climbing to try and outrun his heartbreak.

While Vin struggles to break out of the friend zone, there’s an obvious spark between Nara and Ned, even if they at first deny it. At home, Ned’s mom drops some wise wisdom. “Running away from heartache won’t make us feel any better.” And Vin, despairing in slow motion, tries and fails to tell Nara how he feels, but she only encourages him to date Tiara, a cute colleague from his environmental club. “I want you to experience love!” she says radiantly, and we see Vin turn away in tears. Can you feel the heat of a spurned man? Maybe not, because burning love in Falling Rain is at its lowest setting.

The bad boy and the true believer promise themselves to each other. Ned opens his bruised heart, and takes Nara to his secret place, a swimming hole in the tropical forest. And even as he half-heartedly dates Tiara, Vin hangs his head in sad sack shame. (In the nicest way possible, Tiara calls Vin out for seeing her while pining for Nara. It’s about as confrontational as the feelings in Falling Rain get.) When the dramatic moment we saw coming from a mile away finally arrives, both Vin and Nara have to search their hearts for a bond beyond friendship, beyond even puppy love. Will they find it? Are you still awake?

What Movies Will It Remind You Of?: There’s some derivative “kissing in the rain” Notebook energy here, but it’s a heartfelt hug instead. The Malaysian film Pulang (2018; Netflix) offers similar themes of true love and betrothal, while Netflix also programs a multitude of lighthearted Chinese-produced rom com TV with like minded lightheartedness.

Performance Worth Watching: As Nara, Indonesian actress Aurora Ribero is the clear standout here. Sunny, vibrant, and delivering lines like “That’s not how feelings work” with more emotional heft than they probably deserve, Ribero keeps the feather-light Love Like Falling Rain from drifting off on the breeze.

Sex and Skin: None. Fair warning: there is one forehead kiss followed by a long, meaningful gaze.

Our Take: Love Like The Falling Rain is unfailingly, exceedingly polite, like a pleasant bicycle ride through the tree-lined streets of Jakarta. It explores themes of friendship, true love, and betrothal with a chaste restraint that would feel old fashioned were it not for all the handsome young people dressed in Vans and contemporary casual separates. It’s easy to smile and laugh a little at such a light tone, but it’s really not hurting anyone, and there are more than a few interesting shots of Indonesia’s lush, wild backcountry. And while everyone knows love is the international language, apparently so is a “best friends forever” pinky swear, because it’s the only English phrase spoken in the entire film.

Our Call: SKIP IT. Unless you’re particularly fond of stock “teens in love” tales, Love Like the Falling Rain offers too few meet-cute moments mixed with too much milquetoast melodrama.

Johnny Loftus is an independent writer and editor living at large in Chicagoland. His work has appeared in The Village Voice, All Music Guide, Pitchfork Media, and Nicki Swift. Follow him on Twitter: @glennganges

Not Trump’s Fault: Honduran Mother Sends 7-Month-Old Baby Across Rio Grande with Teen Brother So US Will Take Care of Them

Trump: Biden ‘Has Waved the White Flag on Life – He Doesn’t Leave His Basement’

KNAVS OUT: Melania launches ferocious attack on ex-aide over tell-all…

Goya Foods CEO: US ‘Blessed’ to Have a Leader Like President Trump

AOC: Speech to 'expose' Yoho part of effort to break 'chain of abuse'

Does Dave Ramsey Believe in a Cashless Society?