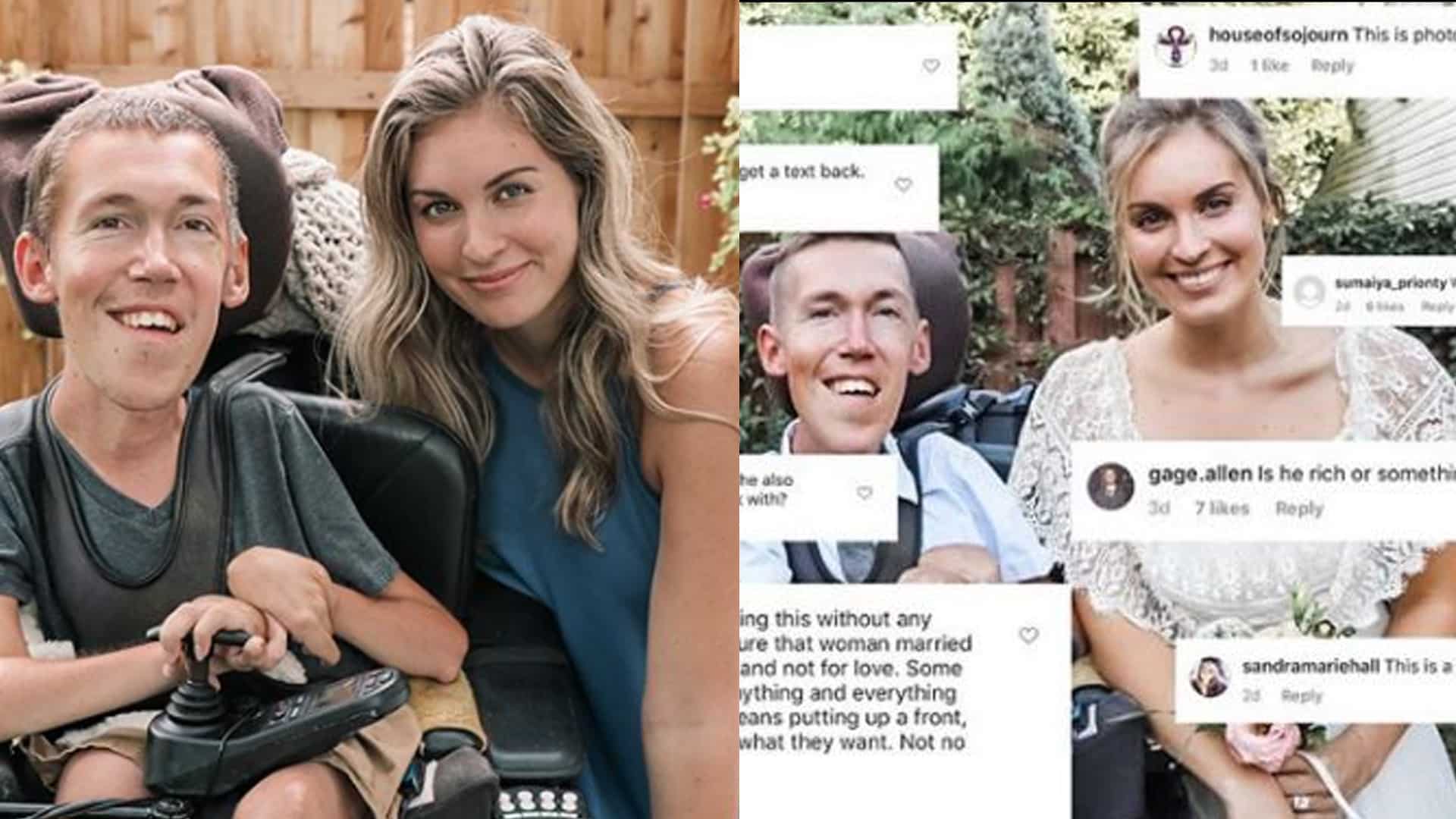 Shane Burcaw and Hannah Aylward, the interabled couple of the YouTube channel Squirmy and Grubs have been the target of offensive comments on their recent wedding video. The couple has faced ignorance and discrimination about their relationship in the past, but this time it went too far.

If the past two years of having a YouTube channel have taught me anything, it’s that you’re never going to be able to educate everyone. No matter what you do, some people will just never come around. Worrying about these people’s opinions is a waste of time, and as time has gone on, it’s become so much easier to genuinely have no internal reaction to comments like these. A few years ago, reading words like these was painful. For a while, I held onto the idea that once Shane and I were married, all the people doubting our relationship would realize it was real. Now, of course, I’m not that naive. Although it’s taken time, I’m able to completely dismiss people like this. Shane and I continue to make content and share our story with the hopes of showing as many people as we can that disabled people are worthy partners. Comments like these only encourage us to continue! We’re so grateful for all of the people that our story has managed to reach in a positive way.

‘Squirmy and Grubs,’ better known as Shane Burcaw and Hannah Aylward have been dating and showcasing their interabled (a relationship where one person is disabled and the other is not) relationship on YouTube for a little over two years now. Shane has Spinal Muscular Atrophy, aka SMA, a rare disease that causes the muscles to deteriorate, while Hannah is able bodied. Their channel quickly reached half a million subscribers as they educated others on disabled living and showed the daily life of an interabled couple.

Shane is an active voice in the disabled community. Originally starting a blog poking fun at his disability, he has since started a nonprofit organization that speaks to schools and provides equipment for those with muscular dystrophy. He has also written a memoir and been the center of a short documentary produced by Rainn Wilson.

The couple originally met because Hannah saw the Rain Wilson documentary and decided to email Shane. The two quickly developed a virtual relationship before even meeting in person! They have been dating for the past four years and finally got married this month.

Shane and Hannah got married in a beautiful backyard ceremony on September 4th. They wrote on their social media channels that while it was not the wedding they expected, the day was perfect and filled with happiness. They both beam in photos and have said they are happy that they have married their best friend and love of their life.

While many fans were happy to see the couple finally getting hitched,

#SquirmyAndGrubs I’m so 😁 4 Y’all!!! Now u just gonna have to share the baby bellies to come & we wanna see babies!!!

Others were less thrilled. A week after they posted their wedding content on social media, hurtful and ignorant comments began flooding their pages. Some of the negative comments were screenshot by Hannah herself. They read:

“Is he rich or something?”

“This is some kind of joke.”

“I’m saying this without any apologies. I’m pretty sure this woman married him because if money and not for love. Some of us women will do anything and everything for money, even if it means putting up a front, pretending, just to get what they want. Not no true love.”

Hannah took to Instagram to respond. She posted a happy newlywed photo of her and Shane with screenshots of some of the mean comments. In her caption she details that a few years ago, these comments would have hurt her, but today they do not.

She continues to say, “for a while, I held onto the idea that once Shane and I were married, all the people doubting our relationship would realize it was real. Now, of course, I’m not that naive. Although it’s taken time, I’m able to completely dismiss people like this. Shane and I continue to make content and share our story with the hopes of showing as many people as we can that disabled people are worthy partners.”

Hannah’s caption emphasizes the fact that so many people still invalidate the lives of those with disabilities so much that they do not believe they are capable of having a “normal” relationship. The negative comments on their wedding posts about the inauthenticity of Hannah’s choice to marry Shane are completely ignorant to the fact that people with disabilities are people too and worthy of love. The comments show a very ugly side of people who think that because of Shane’s SMA, he is unworthy of being loved or having a “stereotypically pretty” able bodied person like Hannah as his wife.

The couple also did what they do best and took to YouTube to address the controversy surrounding their wedding.

They spoke in depth about the systemic inequality disabled people face when looking to get legally married. The couple talk about their decision to get legally married despite the financial implications they might face down the road because of the little options our government gives to those with disabilities.

and that’s on Squirmy and Grubs https://t.co/vxw8OZ6tRu

At the end of the video, Hannah does address that their decision to get legally married was also slightly influenced by the fact that they were worried about the hate they might receive if viewers found out they were not actually legally married. Even though they love each other, and were married in their own eyes, they didn’t want to give more reasons for people to devalue their marriage.

In their response video Shane says, “…and I know the reaction to that from all of you will be, ‘oh just ignore them, they’re dumb,’ but when you’re email is filled every day with dozens of messages from mean people telling us that Hannah is only after my money, or that she can never love someone as disabled as me, and you have to go through and delete them so that you can find your real emails- you’re going to understand why we don’t want to add fuel to the fire.”

Shane and Hannah have always educated people on what it is like to be an interabled couple, and their marriage was no different. It is disheartening to see that despite so much effort on their part to educate others, there are still some that are ignorant and ableist. Any couple knows that invalidation from the outside can cause strain on a relationship, but Hannah and Shane remain strong as ever. Their response video and Hannah’s Instagram post show their resilience towards the haters, proving to those that “disabled people are worthy partners.”

We are wishing congratulations to the newlywed couple and we can only hope their future together is bright.

Democrats Are Trying To Threaten Their Way Into Power

Three Reasons Why Robert Mueller Should Be INVESTIGATED by John Durham