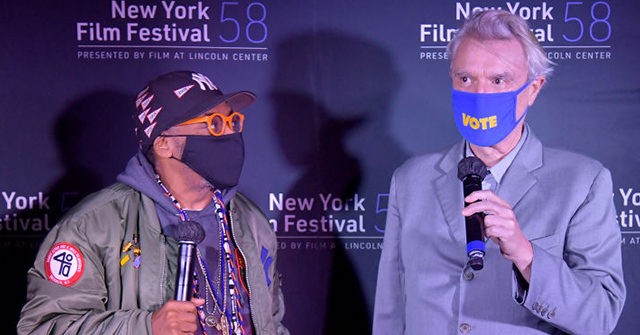 Filmmaker Spike Lee and Talking Heads frontman David Byrne said that they believe that all Americans are inherently racist, but they see hope in young people participating in Black Lives Matter protests.

The duo made their remarks while promoting the new HBO movie American Utopia, a filmed version of Byrne’s recent critically acclaimed Broadway show. When asked what he thinks about the “racial justice” movement, Spike Lee said that the sight of young people participating in BLM demonstrations is “uplifting.”

“Because the young generation, not just in the United States but all over the world, took to the streets. They’re still in the streets marching, kneeling, chanting ‘Black Lives Matter,’” the filmmaker told Esquire magazine. “And I think that this young generation, they want to be better than their parents, their ancestors. So that’s been very uplifting, to see the support, how this has really spread.”

David Byrne said that racism is something that is inside all of us.

“I may not want to be racist, but if I live in a racist country where there is systemic racism, then it’s inside me whether I want it or not. Part of my life’s work is to try to get it out. It’s like a poison that’s in all of us,” he told the magazine.

They also spoke about the election and the possibility that President Trump won’t concede.

“I’m scared about the election,” Byrne told Esquire. “Just the other day, I started reaching out to some voting organizations, because I want to see if it makes sense for me to go to, say, Pennsylvania to get people in a swing state to vote, and to make sure that everybody who wants a mail-in ballot gets one. I think I’ll do it.”

“Because this guy [Trump] is going to do anything to win. It’s going to be skullduggery, shenanigans, subterfuge,” the filmmaker said. “And also, I feel that if we don’t come out to vote in the numbers we need for a landslide that’s not in his favor, he’s going to contest the election. I don’t think he’s going to want to leave the White House. This thing is not a lock. I don’t care what the polls say.”

Lee’s comments echo those he made in Variety earlier this month.

“This could be a civil war,”  Lee said when asked by Variety where the country is heading. “And we got to come out and vote because this motherfucker is not going to leave, and he’ll say that the vote was invalid or rigged. He’s doing that shit already. He’s laying the groundwork to say the election is bogus.”

Barack Obama: Our Kids Face Growing up on 'Uninhabitable Planet'

Alyssa Milano: 'America or Trump, You Can't Love Both'

CNN’s Cuomo: Trump Gave Iran the Idea to Pose as Proud Boys — 'He Talked This Group Up'