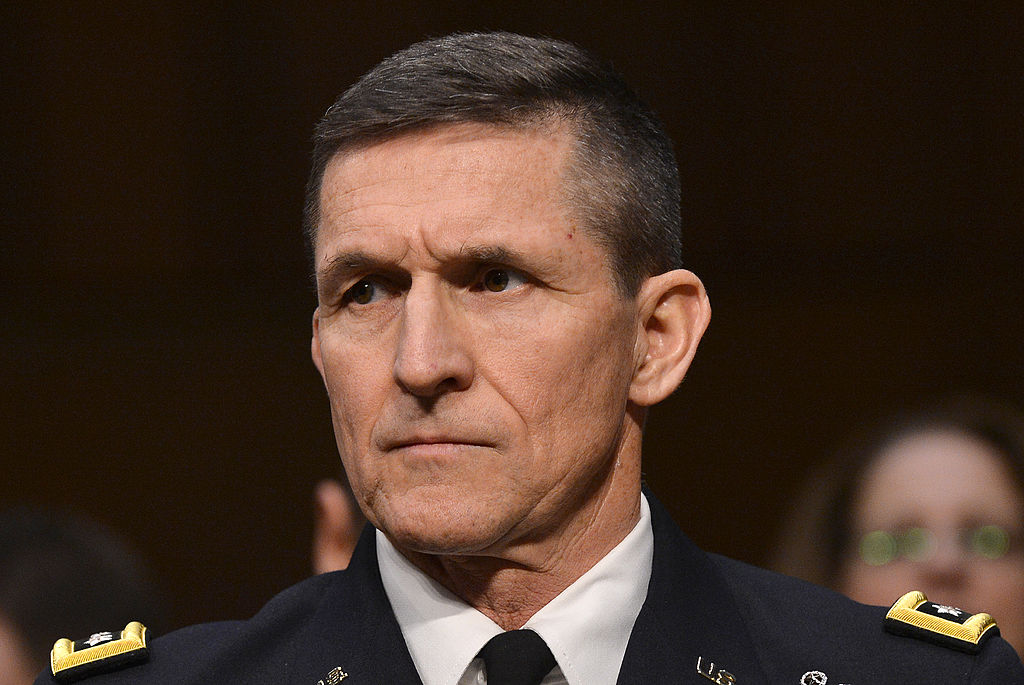 When retired Lt. Gen. Michael Flynn stood before Judge Rudolph Contreras in a Washington courtroom on Dec. 1, 2017, and pleaded guilty to making a false statement to two FBI agents during an interview at the White House in January of that year, nobody could have predicted the yearslong absurdity that was about to unfold.

It looked as if the case against President Donald Trump’s former national security adviser was over before it ever really started. The Department of Justice (DOJ) never unsealed an actual indictment in the case and prosecutors never had to enter any evidence in a courtroom.

There were rumors in the news media in early November 2017, such as this one on Nov. 5 from NBC News, that special counsel Robert Mueller had enough evidence to bring “big charges” against Flynn.

When Flynn suddenly appeared in court and pleaded guilty to lying to the FBI, without any press conference by prosecutors announcing the unsealing of an indictment, it caught reporters by surprise.

That wasn’t the only unusual development in this case. There have been many others. Here are just a few:

Sullivan’s very first action upon assuming control of the Flynn case was to issue what’s known as a “Brady disclosure order” to the government’s prosecutors. This order was issued in February 2018, more than two years ago.

Sullivan’s issuing of such an order has been a trademark of his handling of cases like this since he presided over the utter fiasco that was the case of former Sen. Ted Stevens, in which federal prosecutors were caught withholding evidence and knowingly allowing false testimony in the courtroom.

FBI special agent Joseph Pientka has been playing the role of the DOJ’s “Invisible Man” for more than 2 1/2 Years. While every single other member of the FBI involved in both the FISA court abuse and the Flynn case shenanigans became public figures long ago, Pientka glaringly stands out by his continued absence.

While James Comey, Andrew McCabe, Peter Strzok, Lisa Page, and James Baker are among FBI people who have testified before Congress, Pientka has not. Not only has Pientka never testified, but it’s a Herculean task to even track down a photo of him.

Strzok, who was one of the FBI agents at the Jan. 24, 2017, White House interview of Flynn, which served as the basis for the false statement charge against Flynn, has been a very public figure since December 2017. Strzok was brought out for a very combative televised hearing in front of Congress before he was fired from the FBI.

The other agent directly involved in this case (Pientka) continues to be, for all intents and purposes, a literal ghost.

And now, the newest incredible development.

In January, Attorney General William Barr appointed Jeffrey Jensen, the U.S. Attorney for the Eastern District of Missouri, as a special prosecutor and sent him to U.S. attorney’s office in Washington for a thorough review of the Flynn case.

Barr revealed in mid-February that Jensen was inside the U.S. attorney’s office doing his review of the Flynn case; now, two months later, Jensen has surfaced to hand a stack of sealed documents to lawyer Sidney Powell, who is leading Flynn’s defense team. Powell is now furiously at work attempting to get the documents unsealed by the court.

It has been reported that these documents contain exculpatory evidence that was being deliberately withheld by both the FBI’s Crossfire Hurricane team and the Mueller special counsel’s office.

What makes this curious is that since Judge Sullivan filed that Brady order, lead government prosecutor Brandon Van Grack and his team have repeatedly insisted there was nothing else they were required to turn over to the defense.

And after Flynn fired his previous team of lawyers and hired Powell, Van Grack launched into another round of stridently insisting that the state wasn’t withholding any exculpatory evidence.

Only once has Van Grack deviated from these denials. In a filing made a few weeks ago, Van Grack argued that since Flynn had immediately agreed to a deal and pleaded guilty, even before an indictment was unsealed in the case, he wasn’t entitled to any exculpatory evidence the government might have in its possession.

There may be quite a firestorm if it’s determined that a team of DOJ prosecutors has been caught defying an explicit Brady order from a federal judge for more than two years. They apparently did that to the same judge who caught corrupt prosecutors in Stevens’s case in the act.

Upon learning what the government’s prosecutors had been suppressing in the Stevens case, Sullivan quickly appointed a special counsel to investigate. The resulting final report was so damning, the prosecutors involved tried to unsuccessfully block its public release.

Sullivan ruled against them.

Is history about to repeat itself?

Brian Cates is a writer based in South Texas and author of “Nobody Asked For My Opinion … But Here It Is Anyway!” He can be reached on Twitter @drawandstrike.

In Case of Cardinal Pell, Belief and the Rule of Law Were in the Dock

How lockdown could lead to stronger parliaments

The Only Thing We Have to Fear Is Fear Itself

Diplomacy is another victim of the virus

Disregard for the state of emergency — from inside local government

For Democrats, A Lesson Learned Is An Oppression To Be Repeated

Lessons We Hope America Has Learned Via Past Mistakes

We really weren’t ready to work from home

Haley Attacks FBI Over Flynn Case: ‘It Should Send A Chill Up Every American’s Spine’