The Chinese vessel, also known as CCG 5204, was equipped with a machine gun mounted on the front. The country’s coast guard claimed the gun was only intended to be used as a defence against pirates, according to Phil Star News journalist Patrivia Viray.

Now, authorities in Jakarta, Indonesia’s capital, are speaking out against what they see as an intrusion into their waters.

The ship, however, said it was patrolling within territories owned by China.

Indonesian ambassador Teuku Faizasyah said in a statement: “The Ministry re-emphasised to the Chinese representative that there’s no overlapping between Indonesia’s exclusive economic zone and China’s waters.”

The boat was expelled from the area on Monday following a heated argument with Indonesian authorities via radio, the South China Morning Post reports. 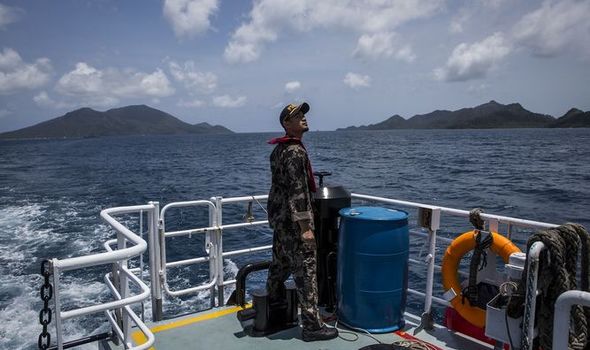 It was then escorted away while Indonesian patrol boats followed it at around midday.

Wisnu Pramandita, a spokesman for Indonesian marine security agency Bakamla, told This Week in Asia it “firmly rejected” Chinese claims the boat had been operating within China’s waters.

He added the area is within Indonesia’s economic exclusive zone (EEZ).

It is not clear when the boat first entered the disputed area, though it was first spotted on Saturday.

The incident is said to have occurred near to the Natuna Regency, an archipelago of 272 islands in the southern South China Sea.

Beijing’s claim to many parts of the South China Sea is linked to what it calls the nine-dash line.

The nine-dash line is a U-shaped boundary said to include roughly 90 percent of the waters.

The line is said to have its origins from the 1940s, when it was included in Chinese maps by the Chinese Nationalist Party.

DON’T MISS:
Trump’s EU fury: President claimed bloc’s ‘vicious’ chief ‘hated America’ in fiery rant [REPORT]
Donald Trump stuns US as he vows to negotiate THIRD term – ‘entitled to it!’ [REPORT]
California wildfires: Why are the wildfires in the US so bad? [INSIGHT]

However, its claims to the South China Sea go back hundreds of years prior, though these are heavily contested.

In recent months, both Australia and the US have firmly rejected China’s claims to the region.

The Australian government said in a statement in July: “Australia rejects China’s claim to ‘historic rights’ or ‘maritime rights and interests’ as established in the ‘long course of historical practice’ in the South China Sea.

“The Tribunal in the 2016 South China Sea Arbitral Award found these claims to be inconsistent with UNICLOS [the 1982 United Nations Convention on the Law of the Sea] and, to the extent of that inconsistency, invalid.”

Chinese government media outlet The Global Times responded by publishing an article in conjunction with Zhou Fangyin, a professor at the Guangdong Research Institute for International Strategies.

It blasted Australia for “following the US lead in confronting China” and “playing the South China Sea card”.

The article continues: “The relationship between China and Australia has now deteriorated to a very bad point, and the chance for a turnaround is slim in the near future.

“One of the main reasons is that Australia’s policy lacks independence, and its current choice is to closely follow the US lead.”

Until We Have Faces: The American Niqaab

Is there a ‘diabolical plot’ against the USPS? | FOX News Rundown

Rep. Louie Gohmert, who often went without a mask, tests positive for coronavirus

Sh!t Has Hit the Fan – Headlines vs G&G Podcast

Want Schools Open In The Fall? Then Pay For It.