The SNP’s Westminster leader was heckled following a furious rant in the House of Commons. Ian Blackford stated that standards in Scotland could drop regarding animal welfare, food safety and environment protection following the end of the post-Brexit transition period with the European Union.

Mr Blackford said: “Let me turn to the contents of the Bill and specifically the numerous aspects that will undermine the powers and authority of Scotland’s parliament.

“Clauses two to nine contain sweeping powers that could compel Scotland to accept lower standards set elsewhere in the UK.

“That means standards on animal welfare, food safety and environment protection to name but a few.”

He continued: “We all know the threat and risk it will bring especially for Scotland’s farmers and consumers. 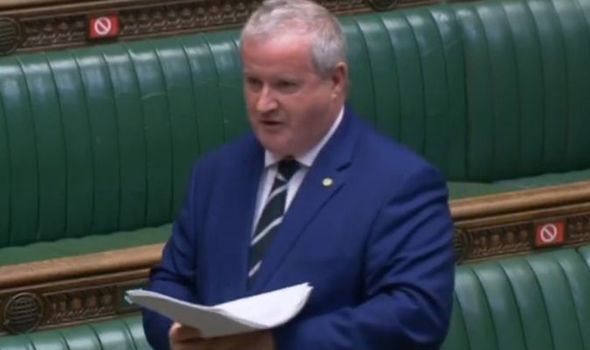 Ian Blackford is the leader of the SNP in Westminster (Image: PTV)

Nicola Sturgeon is the leader of the SNP (Image: SPTV)

“This law is a Tory invitation for chlorinated chicken and hormone injected beef in our supermarkets.

“We can hear the guffawing from the Conservative benches but yesterday morning on Politics Scotland the Treasury Minister more or less admitted that they could not stop chlorinated chicken coming into the United Kingdom.

“Go and check the tapes.”

His comments sparked groans from Tories in the Commons as they dismissed the claims from the SNP Westminster leader.

During an interview with Express.co.uk, the Scottish Conservative Councillor for Cupar Tony Miklinski hit out at the current state of Scotland’s economy and hightlighted the struggles Nicola Sturgeon would face trying to join the EU.

Mr Miklinski added the United Kingdom is stronger together and Scotland’s economy greatly benefits from being supported by the Westminster Government.

He said: “The EU rules that they apply to everybody is a GDP deficit gap of no more than three percent.

“Scotland’s is currently seven percent it is just about the worst in the existing European countries.

“Therefore, the rules that they have, especially post pandemic when all economies are struggling means I can see no scenario where they would welcome effectively a sick orphan, the Scottish economy, into their midst.

Nicola Sturgeon has been Scotland’s First Minister for over five years (Image: SPTV)

“If they did, they would impose strict and severe constraints on how the economy would have to be handled.

“That would mean closing the deficit gap and that can only be done through increased taxation, cutting spending or massive borrowing.”

Mr Miklinski added: “By the way, the SNP talk about give us the powers and we can do this for ourselves for example the UK’s support from the pandemic, of course that is not true.

“There is no way that a Scottish economy which does not really exist in isolation because it is supported by Westminster, would be given rates anywhere as good as the UK Government can negotiate.

“Basically better together means it, we are better as a union with the strengths of the UK meshing with what we offer.”

‘We needed to do more’: volunteers step up in lockdown Lagos

Grim Milestone: How bad can the pandemic get?

Being HONEST With Herself. Couple Building A DIY Pump House Shed.

England faces a 'cascade' of new coronavirus cases and could be heading towards a second 'hard' lockdown, an expert has warned

Once the Seat of Eastern Christianity, Hagia Sophia Is Set to Be Turned Into a Mosque