OHIOPYLE, Pennsylvania—Like most places in the United States, this tiny patch of a town is struggling to stay afloat. Like most places, people here are trying to help others out. And like most places, those who live and work here wonder whether their community will ever be the same.

Vicki Marietta’s family has been in this place forever. Decades ago, her grandparents ran the Ohiopyle House Hotel.

Marietta sat on a picnic bench with her mother outside of Backyard Gardens, her charming, uncluttered store that specializes in baskets of local produce: eggs, bacon, cheeses, jars of honey, apple butters, sauces, relishes and her famous homemade pepper butter (the last of which the Food and Drug Administration makes her call mustard).

People from three states wait all winter to restock their pantries with her pepper sauce once she reopens in the spring.

“Normally, I would be open weekends from mid-March until mid-May and then seven days a week. Right now I’m not opening my doors because of the coronavirus. I am doing curbside pickups for people who call in and want their favorite local items,” she explained. “It’s going to be a tough season for every business in this town, not only me.”

A van pulled up, and two faces familiar to Marietta, Scott Patton and Maureen Patton, emerge to visit with her outside from a safe distance. They are both longtime friends and customers.

Off in the not-too-far distance, the long, long and short warning whistles of a CSX Corp. train howl along the curves of the Laurel Hill Mountain and the Youghiogheny Gorge as it nears the train station-turned-information booth located in the former center of town. It’s the same former center of town where Marietta’s family lived until the state government began acquiring homes for Project 70 development, securing acreage to develop the future home of Ohiopyle State Park.

“They took the biggest part of this town by force, by eminent domain, and it was to create the park,” she explains. “So they displaced a lot of people out of the town. A lot of my family. They tore down my church. They tore down businesses and homes in this town.”

Maurice Goddard, then the secretary of the Pennsylvania Department of Forests and Waters, said at the time that it was “the greatest thing that ever happened for Western Pennsylvania.”

Marietta has her doubts. “It dropped the population,” she said. “When I finally moved out of this town proper in 1978, there were only 115 people left. Now there’s about 35.” 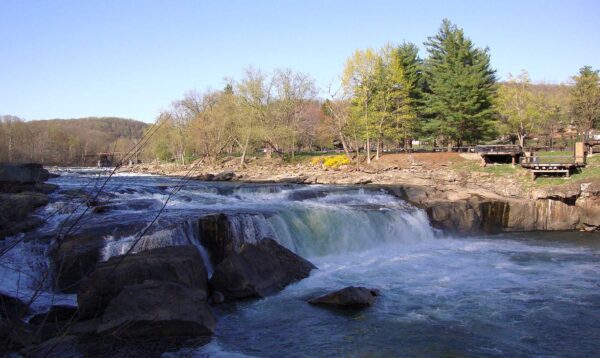 When the railroads came through this area in the 1800s, they brought prosperity. Tourists flocked to see, hear and feel the surge of the river rapids. For a $1 ticket, they brought their picnic baskets and their families from Pittsburgh and Cumberland and stayed for the day. They came from Washington and Philadelphia to stay for the night in any of the grand hotels that once lined the tiny town grid.

There were boardwalks and dance pavilions, bowling alleys and tennis courts. But the big draw was the rapids.

In the 1920s, when an automobile became affordable for average families, people in the region started going on great American road trips and stopped coming to Ohiopyle. The resorts were torn down, along with the dance pavilions and the boardwalk. The town just sort of waited for something to come next.

Forty years later, just before the creation of the state park, the first commercial whitewater rafting company on the Youghiogheny River and east of the Mississippi opened. In its first year, 400 people enjoyed the thrills of the Lower Yough rapids. By 2007, over 100,000 people had come.

Pandemics are not the only forces that have taken a toll on this town. When the automobile came, the town died a little death. When the state park came, the core of its community was elbowed out of generations of living and working, and it died another little death.

Culture, too, has toyed with its fortunes. What the baby-boom generation did to boost this town with thrill seeking on the Youghiogheny has been taken away by millennials and Gen Zers—visits for guided raft trips on the Youghiogheny declined by 40 percent in the past decade and a half.

The Great Allegheny Passage has certainly helped. The iconic bike trail connects Pittsburgh to Cumberland, with Ohiopyle in the middle. It also helps that Fallingwater, Frank Lloyd Wright’s architectural masterpiece, is less than 10 minutes away.

Inside Marietta’s shop, she explains that she has a map that marks where every customer who walks through her door comes from. “Last year, we had visitors from 48 states and 58 countries,” she said. But she is worried for the future. “This whole town is one bad season away from bankrupt,” she said.

Salena Zito has held a long, successful career as a national political reporter. Since 1992, she has interviewed every U.S. president and vice president, as well as top leaders in Washington, D.C., including secretaries of state, speakers of the House and U.S. Central Command generals. Her passion, though, is interviewing thousands of people across the country. She reaches the Everyman and Everywoman through the lost art of shoe-leather journalism, having traveled along the back roads of 49 states.

Gov. Phil Murphy Thanks Donald Trump for Coronavirus Help 'In Our Darkest Hour of Need'

Videos: Blue Angels, Thunderbirds fly over 4 US cities in support of healthcare workers

Schiff: Lives Would Have Been Saved If Only Trump Had Been Impeached And Removed

Rare Inflammatory Syndrome Seen in US Children With COVID-19

What Explains the Difference Between Estimated COVID-19 Fatality Rates in New York and California?

Even During a Pandemic, the Needs of the Many Do Not Outweigh the Rights of the Few