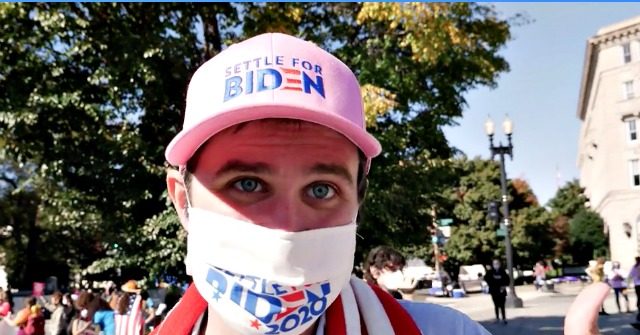 An activist who is “settling for Democrat candidate Joe Biden” said that although Biden was nowhere near his first choice for president, he is still voting for him over President Donald Trump.

“So basically Biden wasn’t my first choice, or my second choice, or my third choice, but I still prefer Biden over Trump, and thus I’m settling for Biden,” the activist named Chris said while protesting at the Women’s March outside the Supreme Court on Saturday.

Chris said that he is not the only person who feels this way and that “Settle for Biden” is a cause he can stand behind and get others to stand behind.

“I think a lot of people this election are settling for Biden, so for me, it’s like a call to action, something that gives me…like I can stand behind this,” the activist said as he was pointing to his “Settle for Biden” hat.

Chris also said that in his opinion, Biden’s team is “better” than Trump’s.

“He’s what we got. And I think his team is going to be better than Trump’s team.”

Still, Chris lamented that the Democrat Party did not choose a younger candidate or a political outsider that would shake things up a bit.

Chris said his biggest beef with Trump as president is his rhetoric.

“The biggest problem I have with Trump is the language he uses,” he said. “I really do feel like it’s dividing our country more. And I feel like no matter who wins this election, we have to come together and stay together.”

Still, Chris feels like his “Settle for Biden” movement helped him make up his mind on whom to vote for in the 2020 presidential election.

“I feel like “Settle for Biden” is a good talking point and a good gradual step to voting and supporting Joe Biden in this election,” he said.

Bannon: Trump Will Run for Reelection in 2024 If He Loses in November

In Republican-Controlled Wyoming, A Gun Rights Group is Now being Forced to Reveal its Donors

SCHOW: The Blatant Double Standards On Display Regarding The Hunter Biden-Email Story

The Uprising Podcast: Somebody Get Me a Doctor

Kanye West: 'We Have to Decouple the Conversation of Planned Parenthood and Woman's Choice'

White House Tries To Ensure Vaccine Is Available Before The Election