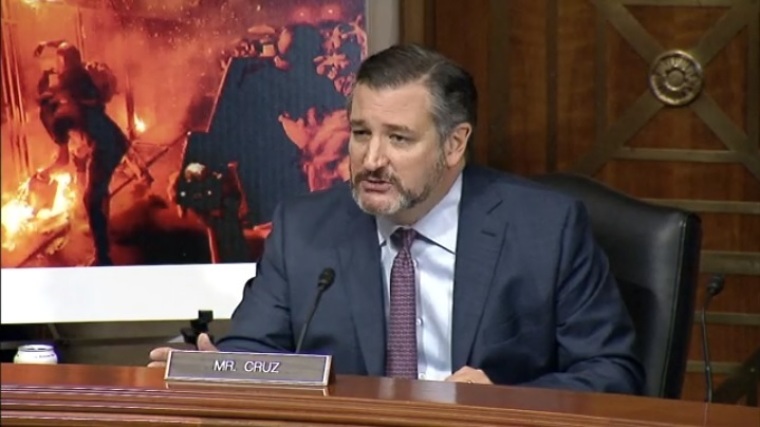 “The Senate Judiciary Committee wants to know what the hell is going on,” Sen. Ted Cruz, R-Texas, said live on C-SPAN Thursday.

The senator said the committee will be voting next week to subpoena Jack Dorsey to “come before this committee and the American people to explain why Twitter is abusing their corporate power to silence the press and to cover up allegations of corruption.”

“Let me be clear: I don’t know if these New York Post stories are true or not,” Cruz said. “Those are questions [former] Vice President Joe Biden should answer. But Twitter and Facebook and Big Tech billionaires don’t get to censor political speech and actively interfere in the election — that’s what they are doing right now.”

Dorsey would be required to testify before the committee on Oct. 23.

Twitter’s censorship of the Post’s story also included blocking anyone with a large Twitter following from sharing it. The platform went so far as locking the personal account of White House Press Secretary Kayleigh McEnany on Wednesday after she shared the article. On Thursday, Twitter also blocked a post by Republican members of the Senate Judiciary Committee who shared the article.

Emails published by the New York Post Wednesday raised new questions about Hunter Biden’s relationship with the Ukrainian energy company Burisma and whether he used his father’s position as vice president for personal gain.

The younger Biden was paid as much as $50,000 a month by Burisma while his father was vice president.

The New York Post obtained emails sent by Hunter Biden more than a year after he allegedly dropped off a laptop containing the communications at a Delaware computer repair store.

According to the owner of the store, John Paul Mac Isaac, three laptops were dropped off in April 2019. While he said he couldn’t identify Hunter Biden as the man who dropped them off for repairs, at least one laptop had a Beau Biden Foundation sticker on it, the name of his late brother and former Delaware attorney general.

Fox News reported that when Isaac began working on the only salvageable laptop, he discovered the emails.

Later last year, Isaac contacted an intermediary who then shared the emails with the FBI. When the FBI did not get back to him, he began contacting several members of Congress.

After failing to hear back from the FBI or members of Congress, the intermediary contacted an attorney working with Rudy Giuliani, the former New York City mayor and one of President Donald Trump’s attorneys. From there, it was only a matter of time before Giuliani provided a copy of the laptop’s hard drive to the Post.

The Post adds in its report that “… both the computer and hard drive were seized by the FBI in December 2019, after the shop’s owner says he alerted the feds to their existence.”

Among the thousands of emails was one sent on April 13, 2014, one week before Biden’s father appeared at a press conference with Ukrainian Prime Minister Arseniy Yatsenyuk and around the time that he joined the board of Burisma. Hunter Biden had allegedly sent an email to his business partner, reportedly referring to his father, then-sitting vice president of the United States, as “my guy.”

According to the younger Biden, “The announcement of my guys (sic) upcoming travels should be characterized as part of our advice and thinking-but what he will say and do is out of her hands.” The younger Biden tried to make the case that his contract with Burisma “should begin now-not after the upcoming visit of my guy” and requested “a retainer in the range of 25k p/m w/ additional fees where appropriate for more in depth work.”

He also expressed hope that “they really are smart enough to understand our long-term value.” At the time of the email, the elder Biden was in charge of the Obama administration’s Ukraine policy. “We could be invaluable in expanding their operations outside Uk by promoting their US partnerships and expertise-whether that’s China, Mexico, other parts of the Black Sea, Poland etc. …” he allegedly suggested.

Just one month later, Hunter Biden received an email from Vadym Pozharskyi, an adviser to the board of Burisma, asking him for “advice on how you could use your influence” on the company’s behalf. In April 2015, Pozharskyi sent the younger Biden an email thanking him for the opportunity to meet his father. Pozharskyi’s email calls into question the sincerity of the elder Biden’s claims that he never spoke to his son about his dealings with Burisma.

In addition to containing emails that raise questions about Hunter Biden’s business practices, the laptop also contained a video appearing to show him smoking crack while engaging in a sex act, as well as numerous other sexually explicit images.

As for the Biden campaign, they rejected the allegations in the New York Post article, calling them part of a “Russian disinformation operation,” in a statement to Politico. But the campaign nor Hunter Biden have denied the veracity of the emails.

“The New York Post never asked the Biden campaign about the critical elements of this story,” spokesman Andrew Bates said in a statement. “They certainly never raised that Rudy Giuliani — whose discredited conspiracy theories and alliance with figures connected to Russian intelligence have been widely reported — claimed to have such materials.”

“Moreover, we have reviewed Joe Biden’s official schedules from the time and no meeting, as alleged by the New York Post, ever took place,” Bates said.

However, the Biden campaign later said the former vice president might’ve had an “informal” meeting with the Burisma executive on behalf of Hunter.

With 19 days to go until the 2020 presidential election, the release of these emails has already led to political consequences. Along with the Senate Judiciary Committee’s plans to subpoena the CEO of Twitter for interfering in the election, the Republican-led Senate Homeland Security Committee also announced that it’s in the process of “validating” the information in the New York Post report.

The committee released an interim report on Hunter Biden’s overseas business dealings last month. Even before the release of the emails Wednesday, questions about Hunter Biden’s business practices and Joe Biden’s knowledge of them had been raised by Republicans and President Donald Trump.

In 2018, the former vice president gave a speech recalling how he threatened to withhold $1 billion from Ukraine if the government did not fire prosecutor Viktor Shokin, who was investigating Burisma. Ukraine ultimately fired Shokin and Biden claimed that his push to fire Shokin had nothing to do with his son, but was instead motivated by concerns about the prosecutor’s corruption.

A request by Trump to Ukrainian President Volodymyr Zelensky to look into this matter prompted the impeachment inquiry, as Democrats maintained that Trump’s temporary freeze on military aid to Ukraine at roughly the same time constituted a “quid pro quo.”

A separate controversial phone call from 2016 was leaked last year of Joe Biden attempting to set up a foreign policy backchannel between himself and then-Ukrainian President Petro Poroshenkoa. Some speculated his actions to undermine the Trump administration could have been a violation of the Logan Act since private citizens are not supposed to get involved in foreign policy matters.

Because social media companies have worked to limit distribution of the Post’s report, Trump and others have called for the repeal of Section 230 of the Communications Decency Act, a provision that has allowed social media companies to grow in size, wealth and influence by providing them immunity from the liability of which most publishers are subject.

So terrible that Facebook and Twitter took down the story of “Smoking Gun” emails related to Sleepy Joe Biden and his son, Hunter, in the @NYPost. It is only the beginning for them. There is nothing worse than a corrupt politician. REPEAL SECTION 230!!! https://t.co/g1RJFpIVUZ

Trump also took to Twitter to call on his opponent in the 2020 election to “immediately release all emails, meetings, transcripts, and records related to his involvement in his family’s business dealings and influence peddling around the world.”

Restaurants Are Using Technology to Bring Back Customers Post-Pandemic

Germany: Optimistic we’ll have a vaccine in coming months and certainly next year

Study Reveals Medieval Longbows Were As Devastating As Modern Guns

How To Create Community Virtually During The Pandemic | TODAY

Golf: Kang holds on for one-shot win at Drive On Championship

The nature of Europe

Joe Biden Brags About Having “Most Extensive Voter Fraud Organization” in History….

Israeli, American and UAE Delegates Gather for Prayer Service Ahead of Peace Talks

Global coronavirus cases rise by more than 400,000 in one day for the first time