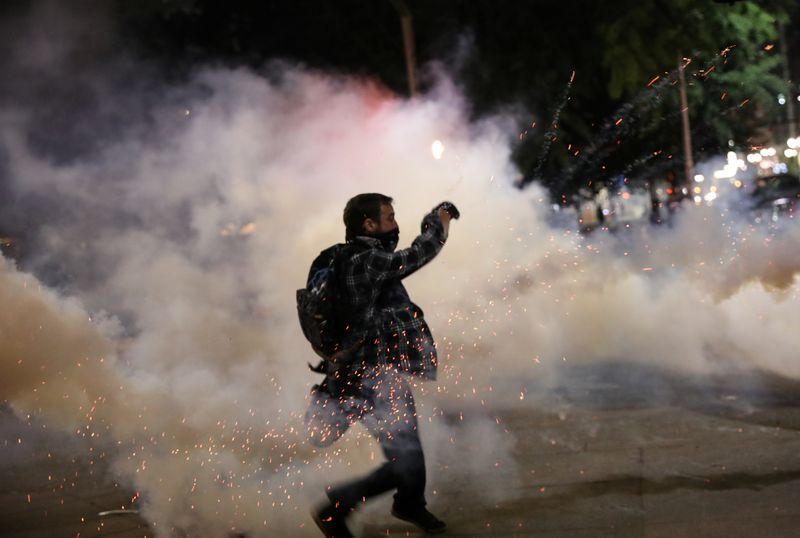 A protester throws a canister of teargas back toward federal law enforcement officers during a demonstration against police violence and racial inequality in Portland, Oregon, U.S., July 24, 2020. REUTERS/Caitlin Ochs

(Reuters) – U.S. prosecutors on Friday unveiled charges against 18 Portland, Oregon, street protesters ranging from assaulting police to arson and trespassing, a day after the Trump administration expanded the deployment of tactical police into Seattle.

Their arrests came this week during clashes with specially equipped federal police agents sent to Portland, where 56 straight days of antiracism demonstrations have captured national attention.

The federal forces have drawn criticism from Democrats and civil liberties groups who allege excessive force and federal overreach by President Donald Trump.

The deployment of federal officers has also drawn the scrutiny of the Justice Department inspector general, who announced an investigation of their use of force, and prompted a federal judge to issue a temporary order limiting their use of force and blocking them from arresting journalists and legal observers of street protests.

As with Portland, the Trump administration sent a tactical team to Seattle on Thursday in anticipation of protests this weekend despite the objections of the Seattle mayor and Washington state governor, who warn of Portland-like escalation of tensions.

The Portland and Seattle teams have the stated mission of protecting federal buildings. In addition, the Trump administration has sent federal police to Chicago, Kansas City and Albuquerque, ostensibly to fight escalating crime, over the objections of those mayors.

Trump, who is running for re-election on Nov. 3 in part on a campaign of “law and order,” has threatened to deploy federal forces in more cities run by Democratic mayors, saying he is concerned about a spike in crime.

The Portland team of tactically equipped, camouflaged officers fired tear gas canisters at Black Lives Matter demonstrators in central Portland early on Friday in what typically is a job for local law enforcement.

“I made clear to Acting Secretary (Chad) Wolf that deployments in Seattle – like we have seen in Portland – would undermine public safety and break community trust,” Seattle Mayor Jenny Durkan said on Twitter late on Thursday, referring to the acting secretary of Homeland Security.

Portland has been rocked by 56 straight days of protests for racial equality and against police brutality, part of a movement that has swept the United States since the May 25 death of George Floyd, an African American, in the custody of Minneapolis police.

The Justice Department said all 18 of those charged in Portland had made a first appearance in federal court and were released pending trial or other proceedings.

Five people were charged with suspicion of assaulting a federal officer, trespassing and creating a disturbance during protests on the night of July 20-21, said Billy Williams, the U.S. Attorney for the District of Oregon.

Seven people have been charged in connection with criminal conduct during a July 21-22 night protest, including one person charged with arson. Another six were charged over events from the night of July 22-23.

How Do We Become Spiritually Mature?

Shootings, Violence Jump In Cities Where Mayors Have Restrained Police

St. Louis homeowner who faced down protesters with rifle believes Trump intervened to protect his community

Kate's couturier – and the sibling bond that's been a wild inspiration

Best Nootropics for your Mind and Body