Dr Li Meng-Yan, a specialist in virology at Hong Kong’s School of Public Health, released a paper on the open-access repository website Zenote. The paper shows how SARS-CoV-2 (COVID-19) could be “conveniently created” in a laboratory setting in six months.

The paper is titled “Unusual Features of the SARS-CoV-2 Genome Suggesting Sophisticated Laboratory Modification Rather Than Natural Evolution and Delineation of Its Probable Synthetic Route.”

“The alternative theory that the virus may have come from a research laboratory is, however, strictly censored on peer-reviewed scientific journals. 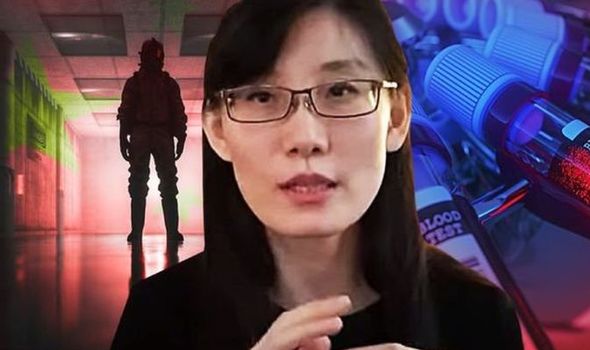 During the interview on Friday, she claimed the coronavirus “comes from the lab — the lab in Wuhan and the lab is controlled by China’s government”.

She added: “The first thing is the [meat] market in Wuhan … is a smokescreen and this virus is not from nature.”

She said that she got “her intelligence from the CDC in China, from the local doctors”.

The scientist was forced to flee to the US (Image: Getty)

Dr Li-Meng said she was one of the first scientists in the world to study coronavirus.

She was allegedly asked by her supervisor at the University to look into the odd cluster of SARS-like cases occurring in Wuhan at the end of December 2019.

But after presenting her findings, Dr Li-Meng claimed her supervisors at first advised her to continue her investigation but later she said to “keep silent and be careful”.

But the academic later fled Hong Kong and escaped to the USA to raise awareness about the pandemic and feared for her safety.

Other scientists have disputed Dr Yan’s claim, including a report from Live Science in March, which definitively claimed: “SARS-CoV-2 is not a laboratory construct or a purposefully manipulated virus”.

Beijing has denied the allegations and the UK and US does not seriously consider it a serious possibility.

In response to her claims, the Chinese National Health Commission said in a statement: “The fact is that there’s no delay or cover-up whatsoever by the Chinese government.

“It reported virus data and related information as soon as possible to the international community.”

“As soon as cases were identified in Wuhan City, China acted immediately to conduct investigations to stop the spread of the disease.”

“The World Health Organisation has said multiple times there is no evidence the new coronavirus was created in a laboratory.”

A World Health Organisation spokesman said: “WHO had already declared the outbreak a public health emergency of international concern on the 30th of January, which is the highest level of alarm under international health law.”

An Unexpected Cultural Clue About America Today, from …. Elvis

America’s nervous breakdown: For white folks who love Trump, a descent into madness

Virologists are LYING about the origins of coronavirus: Yes, the coronavirus contains gain-of-function gene sequences that were INSERTED into the virus

Bring Me the Head of Harry Truman

Ukraine floods: Why climate change and logging are blamed

News24.com | UAE approves use of Covid-19 vaccine for health workers

Yes, there is hope

2 AI chatbots talk to each other